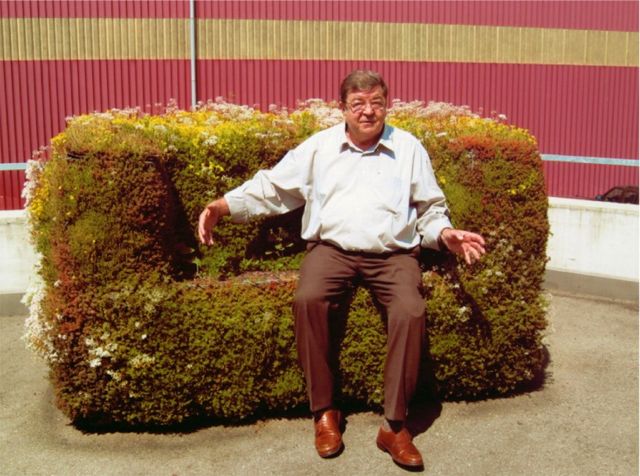 Wolfgang Behrens on his “sedum sofa.” Photo by Joy Schmidt.

Wolfgang Behrens, the father of green roofs, you will be missed.

It is with great regret and deep sadness that I announce the passing of Wolfgang Behrens, father of green roofs.  Yesterday, my life-long mentor and very dear friend died in his home, surrounded by his three daughters and aware of their presence.

As much as this is a difficult time for family and friends, I also know it’s important to celebrate a life worth remembering.

The world has lost a pioneer today.

Wolfgang touched people’s hearts.  He was a man with a vision and unlimited fondness and curiosity for his life’s work.  His vision has inspired the planting of green roofs around the world.  And through every single one, he continues to live.

I could tell you stories about our time working closely together for so many years; breaking into a new field is not without its moments . Some funny.  Some exciting.  Some were even terrifying.

But what comes to mind right now, honestly, is my last visit with him in November.  It was in some ways reminiscent of the many years we sat in his kitchen together, laughing and planning away, with the lovely fields where he did his experimenting, visible from his picture window.

There was much sadness on that visit as his wife was very ill.  But there was also beauty and light.  We went for a walk together through his aqua park, a sea of water lilies, Wolfgang’s creation and pride and joy.  Mr. Behrens especially enjoyed his walks when the lilies were in bloom.  Well, it was November and they were just starting to go dormant.  That was, unfortunately, to be our last walk together.  As short as it was, it was a sweet moment that I will always remember.

As I prepare to return to Germany for the funeral, my mind is heavy with the loss of a generous and noteworthy man.  Wolfgang Behrens, your legacy will live on.  But you will be missed. 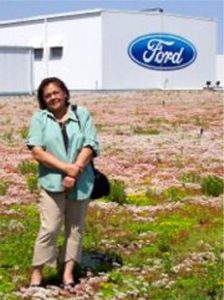 Joy is owner and President of Vitaroofs International, Inc., based in Mississauga, Ontario.  Prior to working and living in Canada, she played a key role as part of the green roof movement in Germany as Project Manager at Wolfgang Behrens System Development. 1,000 green roofs later, she was personally been involved in some of North America’s most celebrated projects including the Ford River Rouge Plant along with Wolfgang Behrens. Joy’s contributions have extended to accredited programming for architects, government task forces and research and development.  She’s also been published as a leading expert in The Rise of Living Architecture, and is a contributing editor here on Greenroofs.com.  Joy writes the occasional column, “On the Road with the Green Roof Lady.”

2 replies to "In Memoriam: Wolfgang Behrens, the Father of Green Roofs"