As reported yesterday, we regret to announce the passing of Mr. Wang Xianmin or Wang Xian Min (in Chinese) of Beijing, China on August 19, 2015 at the age of 72 years. 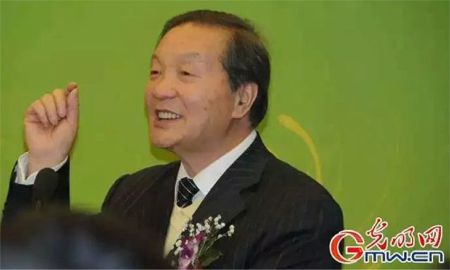 Professor Wang enjoyed numerous accomplishments through his life, and was devoted to promoting green infrastructure throughout China.  In addition to the above named posts, here are just a few more:

See his remembrance from the WGRA and IRLA in Mandarin Chinese here (click on translate to see the English version).

Ed Snodgrass of Emory Knoll Farms told us the news, and has this to say about Professor Wang:

“Wang Xianmin, Professor, founder of China’s Green Roof Associations, and the Executive Vice President of International Rooftop Landscaping Association passed away recently.  Mr. Wang was a warm and gentle man that I have had the pleasure to get to know and work with over the last four years.  He worked hard to promote green roofs and green walls in China.

He was adept at making everyone feel welcome and cared for.  He will certainly be missed.” ~ Ed Snodgrass 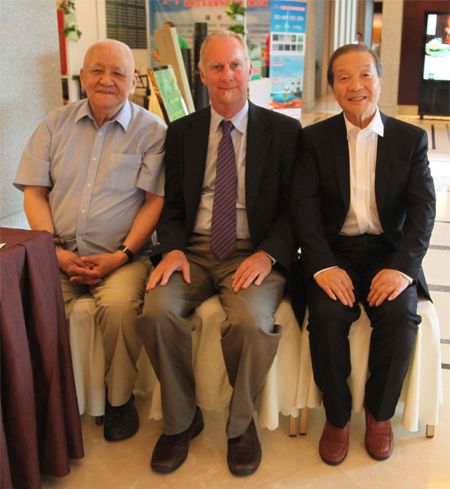 We remember Mr. Wang fondly for his beautiful nature and decades of very important work; here are some thoughts from his fellow WGIN members:

“Professor Xianmin Wang was responsible for the thriving green infrastructure industry in China by holding many conferences including Hainan 2010, the Shanghai Expo 2011, World Congress in 2012, Nanjing 2013.  Professor Wang made many friends in Australia when he spoke in Sydney in 2011 and at the 2014 World Green Infrastructure Congress.  He was well respected internationally and loved for his warmth, generosity and passion about green roofs.” ~ Matthew Dillon, Green Roofs Australasia

On August 25 Green Roofs Australasia observed a 3-minute moment of silence with China at 2100.

“Professor Wang was leading the charge to bring Green roofing into the mainstream in China.  He had a huge smile, and a gentleness and kindness about him that made everyone feel welcome!  He will be missed!  ” ~ Steven Peck, Green Roofs for Healthy Cities

A board member of the World Green Infrastructure Network, Mr. Wang is also remembered on the WGIN website:

“WGIN members appreciate his great work on Green infrastructure over many years.  We will keep him in our best memories as professional and as long year friend. ” ~ Manfred Koehler, World Green Infrastructure Network

Professor Wang was a great conference organizer and believer in the promotion of new ideas as well as youth.  Below he’s speaking in Qingdao, 2014 promoting greenroofs and green energy as a member of the International Association for the Promotion of the Electric Vehicle: 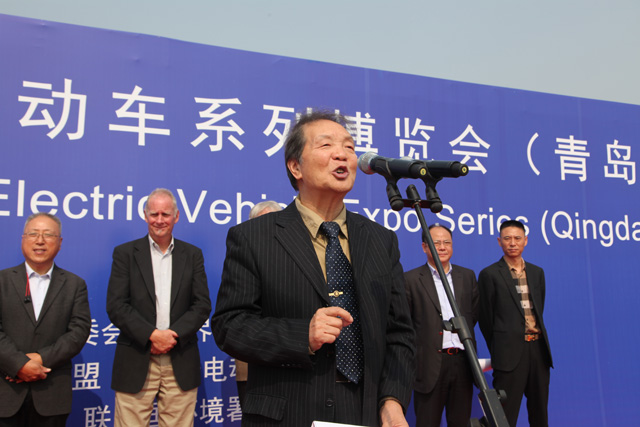 Here he is (middle, left of Mr. Mung) in Nanjing at the 2013 Award Ceremony of Green Award International Landscape Planning Competition: 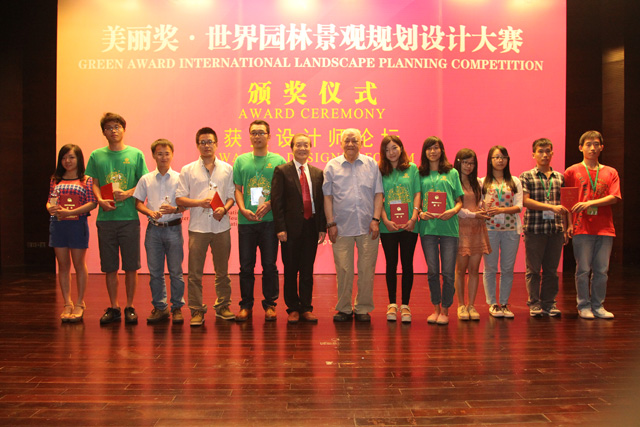 Aramis and I met Professor Wang for the first time in Singapore where he and I both spoke in 2010 at the inaugural International Skyrise Greenery Conference.  We were captivated by his genuine smile, gentle demeanor and fierce commitment to engage us to come to China and help spread the word about greenroofs and greenwalls, which we did in 2012 along with Steven, Matt, Manfred, and many more. 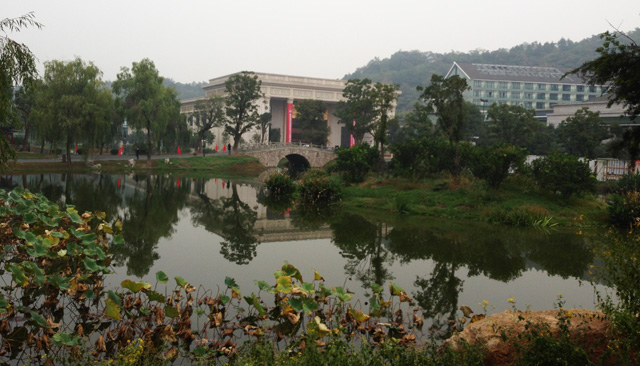 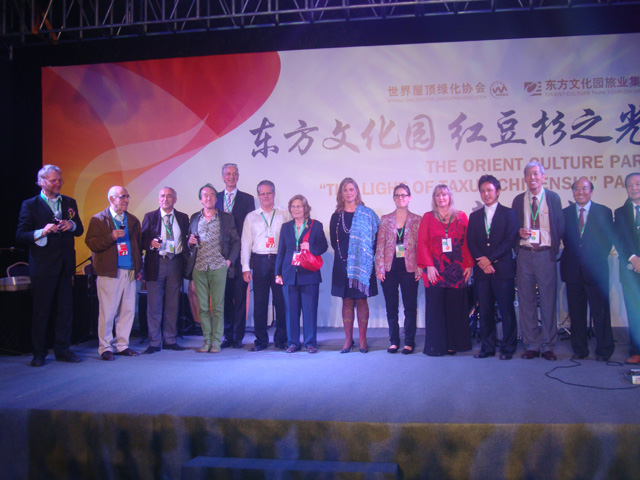 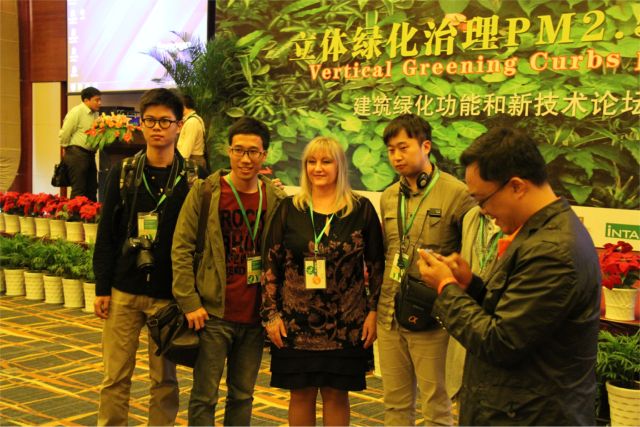 Organized again by Wang Xianmin and his great staff at IRLA, the 2012 Hangzhou China World Green Roof Conference was attended by hundreds – I would guess about 1,600.  It was a fantastic event and we all were treated like royalty. 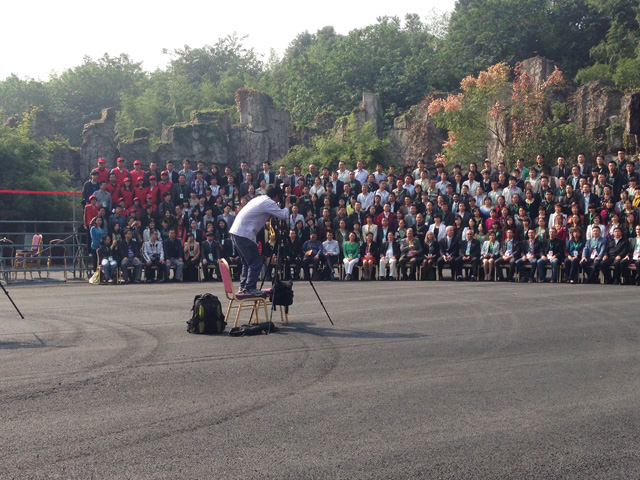 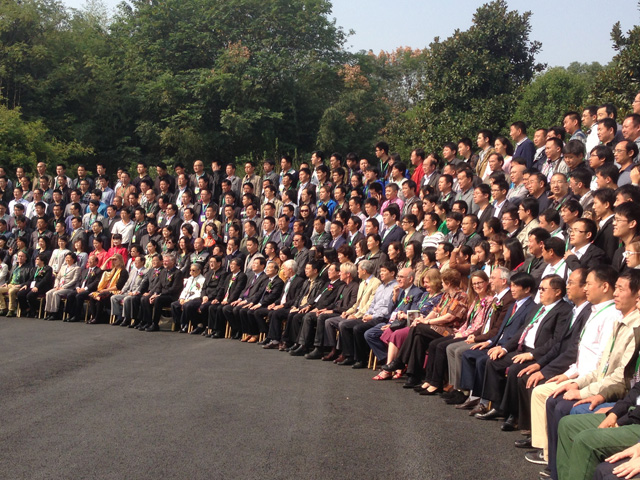 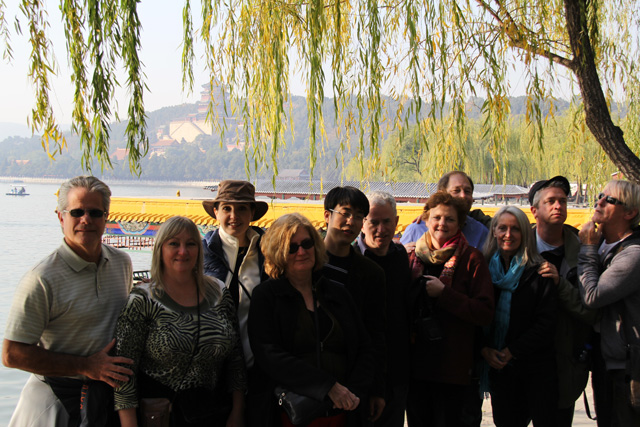 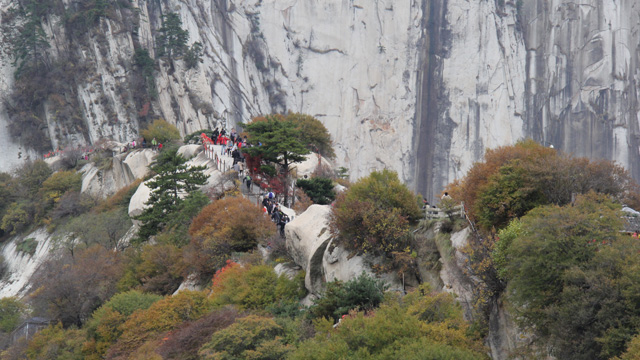 Afterwards about 10 of us went on an amazing whirlwind 6-day tour to several cities including Beijing and Xi’an, the Great Wall of China – and we even had two airplane trips. 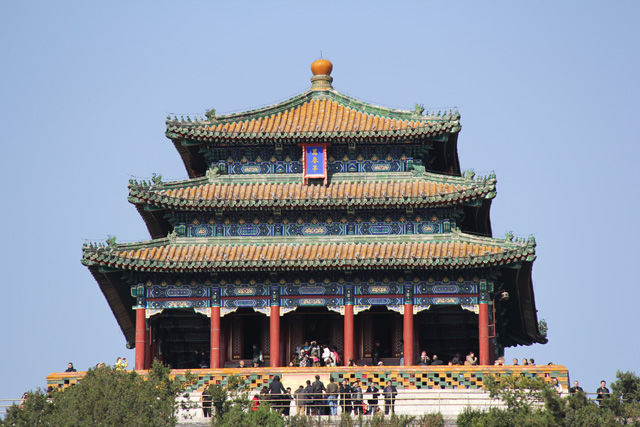 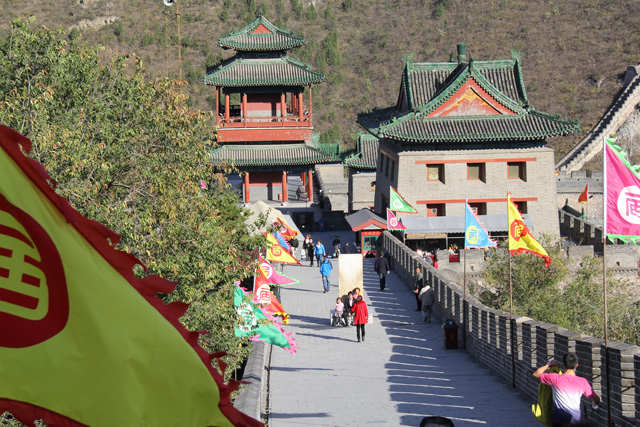 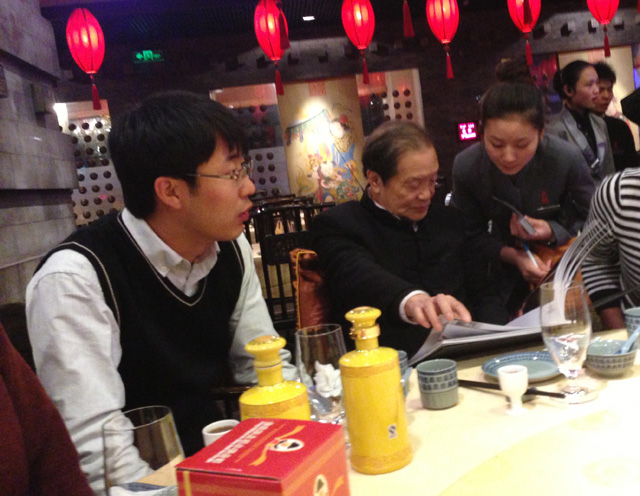 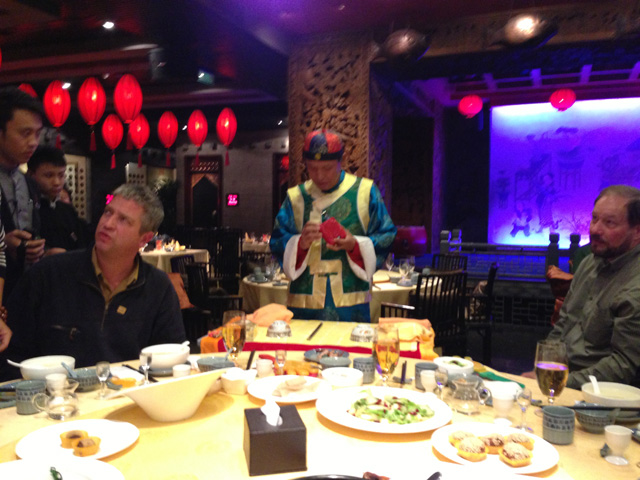 Professor Wang met us in Beijing and treated us to a dinner extravaganza including awesome food, musicians, acrobats, and even a magician.  Led by Professor Wang’s right hand man, William Wei (middle photo, left), our experiences will be greatly cherished and it was truly a trip of a lifetime.

Back at home, Professor Wang graciously participated in both Greenroofs.com’s inaugural Greenroofs & Walls of the World™ Virtual Summit 2011 and in 2013.  See his videos below:

Promo for the Virtual Summit 2013: We filmed Professor Wang at the 2012 Hangzhou China•World Green Roof Congress in November, 2012.

For the Greenroofs & Walls of the World™ Virtual Summit 2011 Professor Wang presented “The Current Situation and Future of Green Roofs in China.”

We visited with Professor Wang last October in Sydney at the 2014 World Green Infrastructure Congress, and will always remember him respectfully and fondly. 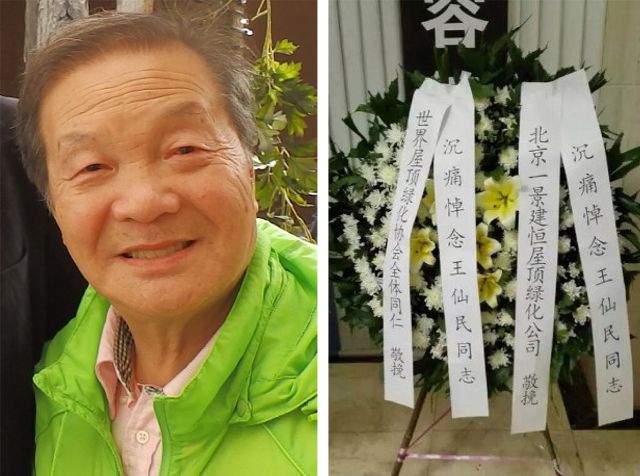 Professor Wang Xianmin will be greatly missed and we send our heartfelt condolences to his family, colleagues, and supporters in China and across our greenroof and greenwall community!

Please add your comments, too.