Today we have the pleasure to air the Panel Session “Environmental Healing through Phytoremediation – Chapter One” with Patrick Carey (Moderator), Dr. Alan Darlington, Dr. Paul Mankiewicz, and Dr. Clayton Rugh. 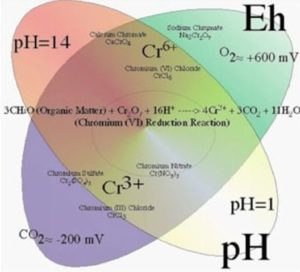 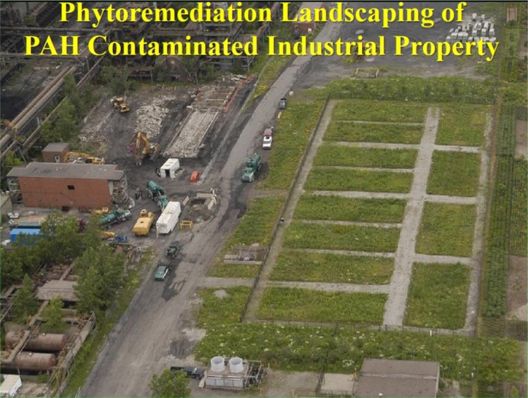 Patrick has been a long time friend, colleague and Greenroofs.com supporter from way back – I’ve known him from about 1999.  As Architecture Editor he has been a contributing editor here on Greenroofs.com since 2005 although he has been writing articles for us prior to that.  Patrick is one of the brightest yet most humble philosophers that I have ever met, has innumerable experience with living architecture, and is a considerate and knowledgeable designer and teacher. 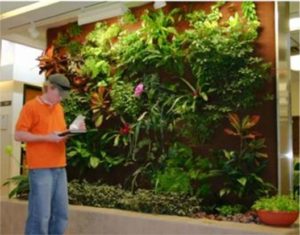 Phytoremediation, plants healing the environment, is a growing approach to air, water, and soil pollution.  This panel reviews and discusses the target pollutants, the various remedial processes of plants and soils, and current examples of systems designed to address pollution issues.  Do not miss this highly expert panel on the extremely important subject of phytoremediation!

“Seattle, WA, USA. Patrick Carey, GRP, has a degree in architecture and is principal of Hadj Design. Since 2000, Hadj Design has evolved from a design-build green roof and living wall to a research and design organization. Patrick has designed, installed, or consulted on over 100 green roofs to date. This work ranges from residential to commercial and institutional, various geometries and global climate regions, and with various performance characteristics such as storm water, food production, healing garden, habitat support, public art, and phytoremediation. As such, he has been an activist in forming or aiding in the formation of grass roots green roof groups. His academic background is in philosophy, architecture, and botany/horticulture. Of people, Patrick states, “Abandon your need to know who he is and judge for yourself the truth of his words. It doesn’t matter if he is a bum in the park or the Pope. Think for yourself and don’t relax your critical faculties in the presence of self-inflating hype.”

Patrick is a trainer with Green Roofs for Healthy Cities where he facilitates the Green Roof 101, 201, 301, & 401 Courses and has also taught at the University of Washington, Washington State University, and has initiated green roof courses at South Seattle Community College, and Edmonds Community College in Washington State. Patrick is also a contributing editor on Greenroofs.com; he is the Architecture Editor (2005). He writes an occasional architectural column entitled “A View from the Sky Trenches,” where he selects and discusses pertinent greenroof industry topics.

See Patrick’s February, 2013 “A Guide to Phytoremediation: A Symbiotic Relationship with Plants, Water & Living Architecture” article on Greenroofs.com. He is the Moderator for both the “Environmental Healing through Phytoremediation – Chapter One” Panel and the “Theory & Field Studies: An Interview with Ian Balcom, Editor for the International Journal of Phytoremediation & Dr. Robert Cameron from Penn State – Chapter 2″ Panel Session.  The “Chapter 2” Panel Session will be aired tomorrow.

New York, NY, USA. Dr. Paul S. Mankiewicz is Executive Director of the Gaia Institute and received his PhD from the City University of New York/New York Botanical Garden Joint Program in Plant Sciences. He holds patents on a modular, in-vessel composting system, an ultralightweight green roof plant growth medium, and a biogeochemical reactor to breakdown dioxins and PCBs. He is past president of the Torrey Botanical Society, board member of the NYC Soil & Water Conservation District, and former chair of the Bronx Solid Waste Advisory Board.

Paul has designed and built natural landscapes to remove metals, hydrocarbons and excess nutrients from runoff and wastewater, capture carbon, and to slower air conditioning and heating costs. Dr. Mankiewicz has constructed the first green roof in the Bronx, the first industrial-scale stormwater treatment meadow and green wall at Sims Recycling – a six acre truck-to-barge material handling facility on the Bronx River, the first process water/greywater treatment green roof on the Linda Tool Corporation in Red Hook, Brooklyn, the first ten of the Mayor’s PlaNYC 2030 enhanced tree pits for street-side storm water capture, in addition to the first community garden constructed for lead mitigation as well as storm water capture – El Jardin del Paraiso on E 4th St. on the Lower East Side.

Durham, NC, USA. Dr. Clayton Rugh is Manager and Technical Director of Xero Flor America. He received his BS in Botany and Genetics and MS in Plant biology, both from The Ohio State University; and PhD from the University of Georgia.

Prior to co-founding XFA, Clayton was Research Professor of Phyto-remediation at Michigan State University directing laboratory and field studies on plant-based detoxification of various pollutants; including mercury, PCBs, polyaromatic hydrocarbons, and nitroaromatic explosives. His work at Michigan State University and University of Georgia included multi-disciplinary research collaborations in phytoremediation, bio-plastic composites, biofuels and green roof technologies, which have been presented in more than 50 peer-reviewed journal publications and 200 lecture seminars.” ~ VS2013

Watch the Panel Session “Environmental Healing through Phytoremediation – Chapter One” with Patrick Carey, Dr. Alan Darlington, Dr. Paul Mankiewicz, and Dr. Clayton Rugh below or see it specifically on its own channel, the Greenroofs & Walls of the World™ Virtual Summit 2013: