As a horticulture student at Oregon State University, in 2010 Jenny Ruthven wanted to design and install her own greenroof, and her parents’ garage seemed like the perfect spot. Family and friends joined in and additional structural support was added in ceiling joists, collar ties, ledgers, vertical braces between joists and rafters, and plywood next to the double doors for increased vertical stability.

Old shingles were removed and since the plywood underneath was still in good condition, they stapled felt paper on top to protect the 20′ x 30′ piece of EPDM waterproof membrane.  The 35 degree slope required soil stabilization in the form of pressure treated 2×4’s placed on end in a grid pattern to ensure minimal slumping of the soil.  A custom 3-4″ growing medium was used and they planted 432 plants – about 60 different species and varieties total including: 24 types of Sedums, bugleweed, heather, ice plant, wintercreeper euonymous, purple leafed heuchera, candytuft, Lithodora, Bee Balm, and Black-eyed Susan.  Soaker hoses cover irrigation needs.

Jenny’s parent’s garage wasn’t ugly beforehand, as you can appreciate below, but it wasn’t particularly interesting either –  let alone green in any way:

Before actually greenroofing it, Jenny Ruthven spent a lot of time online researching greenroofs, especially and how to install the membrane, edging and soil stabilization boards.  Her friend Brendan and she also attended the City of Portland Bureau of Environmental Sciences two day ecoroof seminar series, to whom she credits much of their success.

Jenny also credits her  Grandpa Jerry Ruthven, above right, for his help and ideas, and to Jill Sousa and Bob Drury for structural suggestions.

After structural considerations were addressed, the team tackled the roof itself. After the 29-year old shingles and tar paper were torn off and new EPDM was installed, 1 x 6 cedar boards were placed on either end of the roof.  The membrane was wrapped up and over the boards, with metal flashing placed on top.  On the front and back Trex boards with L-brackets were used, screwed down through the membrane into rafters below every 2 ft.

Jenny decided to concoct her own growing media blend – it sounded a bit high on on the organic side to me, but she made a custom made blend consisting of about 52% inorganic and 48% organic.  The inorganic potion is all pumice, with a bit of perlite thrown in, and half of the organic component is cedar grove compost – the rest is coconut fiber, peat moss, mushroom compost, chicken compost, and steer compost.

Since Jenny’s mom, Sandra, is a plant person (she works at Portland Avenue Nursery), she handled the planting design and selection and decided to use 4″ pots and plant one per sf.  She even propagated about 75% of the plants herself in the months before.    As with everything else, on planting day the Ruthvens had a lot of help and planting!  This is what it looked like right afterwards:

And this is what the Ruthven Garage looks like now, in mid-May – the south-facing side (below top) is growing more abundantly in comparison to the north-facing slope (below bottom):

In retrospective, Mom Sandra says that she  figured that she’d really like her greenroof, but had never anticipated how much.

“Green roofs are amazing!  The plants grow so fast and I had so much fun propagating and designing the roof.  We have since done another green roof on my mom’s garage that we planted late March of this year.  And I want to do more in the future.  I’m always up on the ladder just looking to see how everything’s doing.  I’m definitely hooked on them.” ~ Sandra (Sass) Ruthven

In mid May, 2011 after about a year after from installation, Jenny told me:

“We’ve had really good survival with the plants.  Only lost a few mondo grass and some lithodora.” ~ Jenny Ruthven

She also says the total materials cost of the Ruthven Garage project was a mere $4.18/sf, and on a side note, during the roof’s first real rainfall of 2010 it rained .17 inches, and had a 91 % retention rate!

Jenny says she’s up for to questions or if you would like help with a project in the Portland or Tacoma area, contact her at: jenny.l.ruthven@gmail.com. 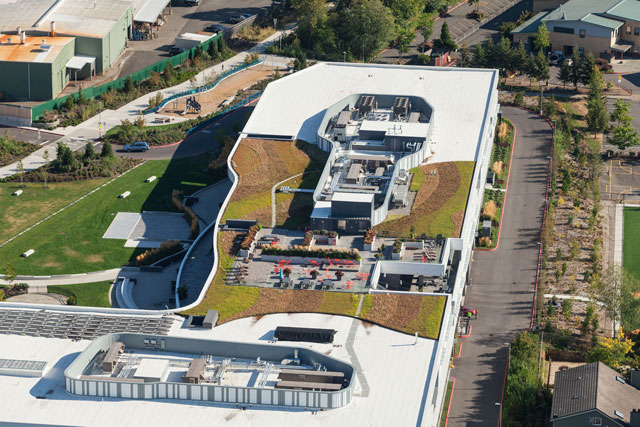