I’m a little late for profiling last week’s Greenroof Project of the Week (GPW), the stunning Oregon Health & Science University (OHSU) Center for Health & Healing (CHH) – because we were in Portland last week for Ecoroof Portland, which I’ll be blogging about next.

I’ve been a fan of  this project for a few years – in 2008 Haven Kiers and I included it in the #1 category for our Top 10 List of Hot Trends in Greenroof Design, “The Influence of LEED on Design Professionals = Pushing the Green Envelope.” And as a judge for the 2009 Green Roofs for Healthy Cities’ Green Roof Design Awards of Excellence, I had the pleasure of reviewing it in detail (unfortunately, it was beat out by the awesome Gary Comer Youth Center).

The Oregon Health & Science University is dedicated to improving the health and quality of life for all Oregonians through excellence, innovation and leadership in health care, education and research. One of the largest employers in a city and a state known worldwide for leadership and dedication to conservation and the environment, OHSU’s CHH building represents the state-of-the-art in integrative design, involving the hard work and input of many multidisciplinary professionals.

Located in Portland’s South Waterfront neighborhood, the award-winning 16-story, 400,000 sf OHSU Center for Health & Healing is one of the first buildings to rise from this former shipyard site and the first building in their new River Campus.  The Center for Health & Healing is the most resource efficient large scale building in the region, and one of the greenest in the U.S.

A mixed-use facility for wellness, medical research, clinics, surgery, classrooms and ground floor retail, in 2007 it received Platinum LEED certification, making it the first medical and research facility in the world to have achieved this distinction. The integrated design features this building boasts is amazing (see the Project Profile), and as a result is 61% more energy efficient than required by Oregon code.

“This is a remarkable achievement given the complex array of uses and systems that were needed in the building. We had to capture every opportunity to integrate together function, architecture and engineering. This is really the result of a great collaborative team effort. We have set a new standard for OHSU and for other projects in Portland.” ~ David Crawford, chief financial officer of the OHSU Medical Group (press release).

The Center is linked to Marquam Hill by the Portland Aerial Tram, which has proved to be a major success. According to OHSU, this highly efficient passenger conveyance between their facilities is estimated to eliminate 2 million vehicle miles and 93,000 gallons of gasoline annually, and reduce yearly greenhouse emissions by more than 1,000 tons.

Non-accessible ecoroofs include those found on the 17th floor, and staff-only extensive gardens and office accessible balconies located off the 15th and 16th floors, above.

“Both programmed for passive recreation, these rooftop gardens allow patients, visitors, staff and faculty to enjoy scenic views of the region, informal social interactions as well as organized gatherings and events. The roof gardens incorporate paths through lush plantings and benches for seating, offering fresh air and a green oasis as a seasonal topic for the soul amidst the stressful world.” ~ Walker Macy.

We had wanted to visit the building, but were unable to due simply to time restraints. But we did speak with Laura Herbon, Associate at Walker Macy, the landscape architecture firm who designed the greenroofs (they were exhibiting at Ecoroof Portland). Walker Macy has broad experience providing dynamic garden design for roof gardens, ecoroofs and courtyards over structures, and their work covers a broad range of sizes and purposes and includes places meant for people to gather and grow gardens as well as sites designed strictly for stormwater management. The OHSU CHH certainly does both!

Walker Macy has worked on many ecoroofs in the area, including The Louisa, Mercy Corps Headquarters, Bellevue Towers, and Doernbecher Children’s Hospital – among about 18 others involving greenroofs of some sort. Macy Walker shared the following info about OHSU’s CHH:

“The green roofs are reducing the peak run-off volumes to the storm sewer, designed to store a minimal amount of water to keep the soil saturated, since the region’s climatic pattern – extremely wet winter and extremely dry summer – generate the volume of stored water that cannot equal the demand and supplemental irrigation that is needed. The stormwater network connects all rooftop gardens and the fertilizers used contain no phosphorus. The OHSU building incorporates both rainwater and groundwater collection systems on the roof and underground, which get mixed with the building’s own gray water and sent to the basement treatment system. Reclaimed water is stored in cisterns before being pumped upstairs or sent outside to irrigate the building’s grounds and rooftop gardens. Excess reclaimed water is piped into the nearby Willamette River.

“OHSU had to obtain a number of special permits to install its state-of-the-art water system, which includes a membrane bioreactor in the basement that basically is a small scale sewage plant. The result is that the building uses 60% less water than most buildings its size, and its outflow to the city sewage pipes is virtually nonexistent. Through the installation of a bioreactor on site, the building cleans 15,000 gallons of wastewater a day. Constructing the water system was expensive, despite a $50,000 grant from the Portland Office of Sustainable Development and more than $500,000 in system development charges the city waived because the building does not outflow into city sewage. OHSU estimates the system will not pay back its initial costs for at least 10 years. Meanwhile, the building’s $12,000 annual water bill is considerably less than the $80,000 to $100,000 bill OHSU estimates it would have paid without the water reclamation system. The CHH generates 2.1 million gallons annually in potable water savings.” 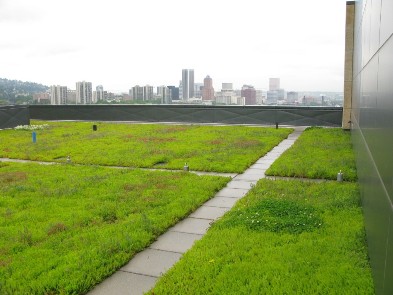 Walker Macy continues, “After deducting tax credits and other financial incentives, the green premium for this building was a mere 1.13% of the total project cost. The facility’s return on investment will be just over one year, after which the energy savings are projected to be $600,000 annually.”

Wow! The Oregon Health & Science University Center for Health & Healing  embraces all that a green building should be: energy and resource efficient and good for the soul, all while providing beautiful and peaceful aesthetics. For additional information on this LEED Platinum building and how the greenroofs tie into the whole system, review this thorough case study document produced by OHSU design team member Interface Engineering (you can also see the LEED Scorecard) or contact Walker Macy.