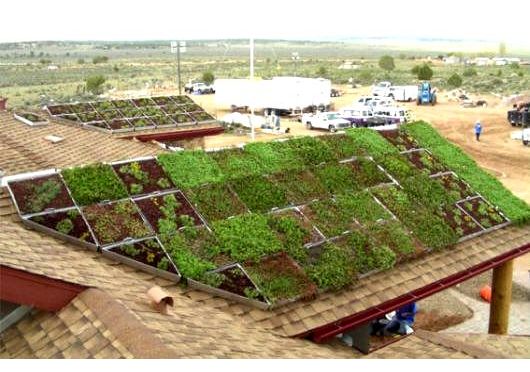 See Kelly Luckett’s April 2007 Roving Exhibitor column describing his wonderful experience here on Greenroofs.com. Read ABC15.com Reporter Jenn Burgess’ WebXtra Blog on the Navajo Nation family’s new home in ‘Extreme Makeover: Home Edition’ comes to Arizona,” for her in-depth journaling at the scene including many photos of the emotions, hard work, and joy of the entire Pi?on experience. Jenn talks about the native landscape of grasslands that give way to terra cotta-colored cliffs dotted with green brush. She also delves into Navajo dwelling traditions and placement of built structures, and among other topics touches on the reverence and significance of the feminine in native architecture, and Hogans, in particular.For more info about Green Roof Blocks, see their listing in The Greenroof Directory or visit their website.

In early 2007, Kelly Luckett of Green Roof Blocks was contacted by ABC producers to provide a quick, modular solution for a first – a special “green” Extreme Makeover ? Home Edition in the Arizona desert. The project was a residence to be built in the northeastern Arizona community of Pi?on, in Navajo County, in the Navajo Nation, northeast of Flagstaff for a single mother and her children. After demolition of the existing house, the new solar and wind-powered house went from foundation to roof in about 12 hours.

ABC journalist and blogger, Jenn Burgess, says the “96-hour build could not be happening without the hundreds of volunteers, folks who work in construction, help with meals, clean up around the jobsite and perform various other behind-the-scenes tasks. They’re working hard, everyday. In fact, some get just 4 or 5 hours of sleep each night.” (See below.)The extra power generated from their solar and wind equipment will be funneled into the Pi?on grid.