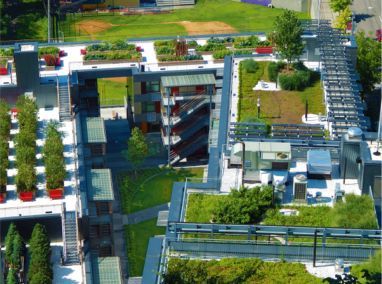 Via Verde – The Green Way is located at 700 Brook Avenue (and E 156th Street), Bronx, New York City, NY 10455, http://viaverdenyc.com/; read about its Green Features here and see numerous press articles and videos here. Watch the 2:23 video Via Verde | The Green Way – Project of the Week 4/7/14 from Greenroofs.com on the greenroofsTV channel on YouTube.

See the May 3, 2013 9:27 “Via Verde” Bronx Rooftop Garden Club #1 2013 from emmitt Thrower on YouTube.com. See the project profiles from Grimshaw Architects; Jonathan Rose Companies; Architezer™; the American Institute of Architects; Urban Land Institute, plus see their January 16, 2014 videos on YouTube Via Verde Overview (3:17) and Via Verde Design (2:36); and Bright Power. Read the September 21, 2013 A healthy place to live in. by Charlotte Choo in Asian Urban Epicenters; November 12, 2012 A Walk Through Via Verde by Lisa Speckhardt in Landscape Architecture Magazine, including a 5:55 video; October 13, 2011 The Spectacular Green Way to Build Affordable Housing by Kaid Benfield in NRDC Switchboard; and the September 26, 2011 In a Bronx Complex, Doing Good Mixes With Looking Good by Michael Kimmelman in The New York Times. Visit the Nations Roof website at nationsroof.com. For additional information about this project, contact Marilyn Bontempo, Mid-Hudson Marketing, representing Nations Roof LLC at [email protected]

Situated in the heart of the South Bronx, barely two blocks from New York’s Yankee Stadium, Via Verde – The Green Way, is a model of green living at its best. This project was the winning response to the New Housing New York (NHNY) Legacy Competition sponsored by the New York City Department of Housing Preservation and Development (HPD) and the American Institute of Architects New York Chapter (AIANY). Designed by the high-profile, world-renowned Dattner Architects and Grimshaw Architects based in New York and London respectively, these two architectural icons collaborated to create what is hoped will be the future of healthy inner-city housing.

While monetary support for such idealistic, health-inducing spaces is usually difficult to generate, particularly for those which embrace today’s trendy “green-design” concepts, financing for this $98 million project was the result of NYC Mayor Michael Bloomberg’s multiple tax bond and subsidy initiatives which allowed those with a lower income to qualify for residential eligibility.

With an extraordinarily high incidence of asthma in the Bronx, along with prevailing obesity, partially because of limited access to fresh produce in poor neighborhoods, Via Verde was conceived to solve such health concerns. Now 100% sold out, there remains a constant influx of candidates for residency on an extensive, ever-growing waiting list, proving that the lure of a healthy lifestyle has powerful appeal.

Building Type: 222 residential units, 71 units sold as middle-income households and a balance of low- and moderate-income rentals. The building consists of a 20-story tower, a mid-rise building with duplex apartments and townhouses.

When Nations Roof East LLC, based in Yonkers, New York, was called upon by Lettire Construction to handle the execution of Via Verde’s designs, it accepted the challenge with full cognizance of the project’s complexity, in addition to its urgent schedule of completion. As a unit of Nations Roof LLC, one of the country’s top five leading commercial green-roofing specialists, Nations Roof East is one of some thirteen other roofing components nationwide that comprise the corporate structure of the company which totals over $100 million in average sales each year. The Via Verde project joins a long list of other comparable projects within the Nations Roof storied history, which is defined by some of the largest, most difficult and dangerous roofing work in America. This is largely due to a long-standing reputation for excellence in both skill and experience using today’s most innovative systems, combined with the priority of safety as the company’s most critical parameter. According to Nations Roof’s CEO, Richard M. Nugent, “We honestly have invested millions in our safety program which is the number one concern we share with our customers.” Given that Via Verde’s working heights soar some twenty stories above ground level, roughly about a fifth of the height of the tallest building in the United States, the goal of safety was a constant and serious challenge.

Via Verde boasts some eleven levels of cascading rooftop garden terraces where self-irrigated flowers, fruits and vegetables, grasses, trees and shrubs easily withstand city temperatures in excess of 100 degrees F. On the day of our visit in August 2013, their lushly prolific blooms enhanced and cooled the setting for gardening and cooking classes regularly conducted there for the residents’ benefit.

Green roof technology used at Via Verde affords residents a wealth of leisure-time activities and physical escape to areas which have been until now inaccessible to anyone other than authorized staff, considered dangerous because of the presence of vulnerable equipment and intricate building- maintenance systems.

The variety of plants used within the many Via Verde roof levels includes succulents; sod grass lawns; perennial and annual flowers; diverse vegetables such as kale and tomatoes; fruit such as raspberries and blueberries; shrubs; and even small apple and fir trees, the latter of which are decorated during the festive Christmas holidays.

Using American Hydrotech’ s hot rubberized asphalt, 2×2 Glacier white concrete pavers with insulation board of extruded polystyrene, in combination with special components to permit excess water to drain properly, Nations Roof also installed Via Verde’s sophisticated irrigation systems on every level for maintenance-free, growing-season success. Not only providing a place to find peace and tranquility, the roof gives residents the opportunity to cultivate their own garden plots in a secure, self-sustaining and aesthetically beautiful environment.

Like the roofs, Via Verde’s courtyard complements the roof garden aesthetics by offering a secure, protected and restful place to socialize or retreat within a peaceful and serene environment. Entry to the many roof levels above is freely accessible from a series of stairs where residents can pause to enjoy a multitude of vistas at every level, appreciating the various stages of bloom of the copious plantings everywhere. In keeping with the project’s theme of healthy living, residents are presented with multiple opportunities for fitness, natural light, fresh air, social interaction and positive energy within every aspect of this residence.

Via Verde’s outstanding green roof technology, which includes solar panel and roof garden implementations, serve many purposes which include: enhancing the building’s appearance; adding space for tenant use and recreation; addressing the “urban heat island” problem; managing storm water by retaining 50%-90% of a typical rainfall on the roof; improving the building’s energy efficiency; processing airborne toxins and re-oxygenating the air; and creating therapeutic and peaceful environments for year-round residential enjoyment. The greenroof project alone is valued at $2.9 million.

Nations Roof’s year of work to execute this impressive project transformed areas of the building which traditionally were unused to become amenities of the residence while serving to protect the actual roof membrane. Via Verde, which has been honored with numerous prestigious awards, achieved LEED Gold certification from the U.S. Green Building Council (USGBC) for its innovative environmentally-responsible design.