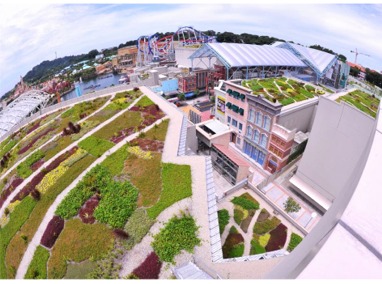 Universal Studios Singapore, an integral part of Resorts World Sentosa, is a casino-resort off the south coast of Singapore and celebrated its grand opening on 28th May 2011. Occupying almost 124 acres, it is Asia?s first movie-theme park. The Park is home to 24 exciting rides and the world?s biggest single collection of DreamWorks Animation attractions, where familiar characters from movies like Shrek and Ice Age come alive. Visitors will come face-to-face with dinosaurs and Egyptian mummies and be able to challenge fear in adrenaline-charged rides in The Lost World?, Hollywood Boulevard and Egypt.

Amid the make-believe world of movies, roller-coaster rides, theme dining and shopping, down-to-earth issues in the Park were not ignored. Sustainable ?green? features including solar panels and green roofs were extensively integrated into the theme park?s concept and design, showing its firm commitment to energy conservation and responsible environmental stewardship. The massive green roofs substantially return the green space originally at the site before construction of the park. Additionally, they provide an insulating shield against tropical temperatures, helping to cool building interiors and their immediate surrounds, mitigating urban heat island effect as well as contribute aesthetically to the ambience of the park. The Park is consequently rewarded with reduced energy consumption, improved sound insulation and increased life span of waterproofing membranes on the rooftops.

Elmich Green Roof was used as the wide structural spans of the immense roofs and fast track construction of the Park demanded that the system selected must be light and easy to install. Elmich Green Roof comprises a VersiDrain? 25P water retention and drainage layer, a geotextile filter layer and EnviroMix? GR, a primarily inorganic soil-less lightweight planting media and drought-tolerant plant species that require little or no maintenance.

For the metal roofs, VersiCell? structural drainage/insulation cells were used to fill the space between the metal ridges to create a level flat surface on which a separation sheet and geotextile layer followed by VersiDrain? 25P drainage and water retention trays were installed. A filter fabric was positioned over the trays and EnviroMix? GR installed on top prior to planting of the selected drought-tolerant plants. For the concrete roofs, waterproofing is provided by a fully adhered layer of root-resistant Evalon PVC/EVA terpolymer membrane. An irrigation system is incorporated on the roofs for use during the initial plant establishment and to provide regular irrigation and fertilization on the roofs, especially essential in prolonged periods of drought.