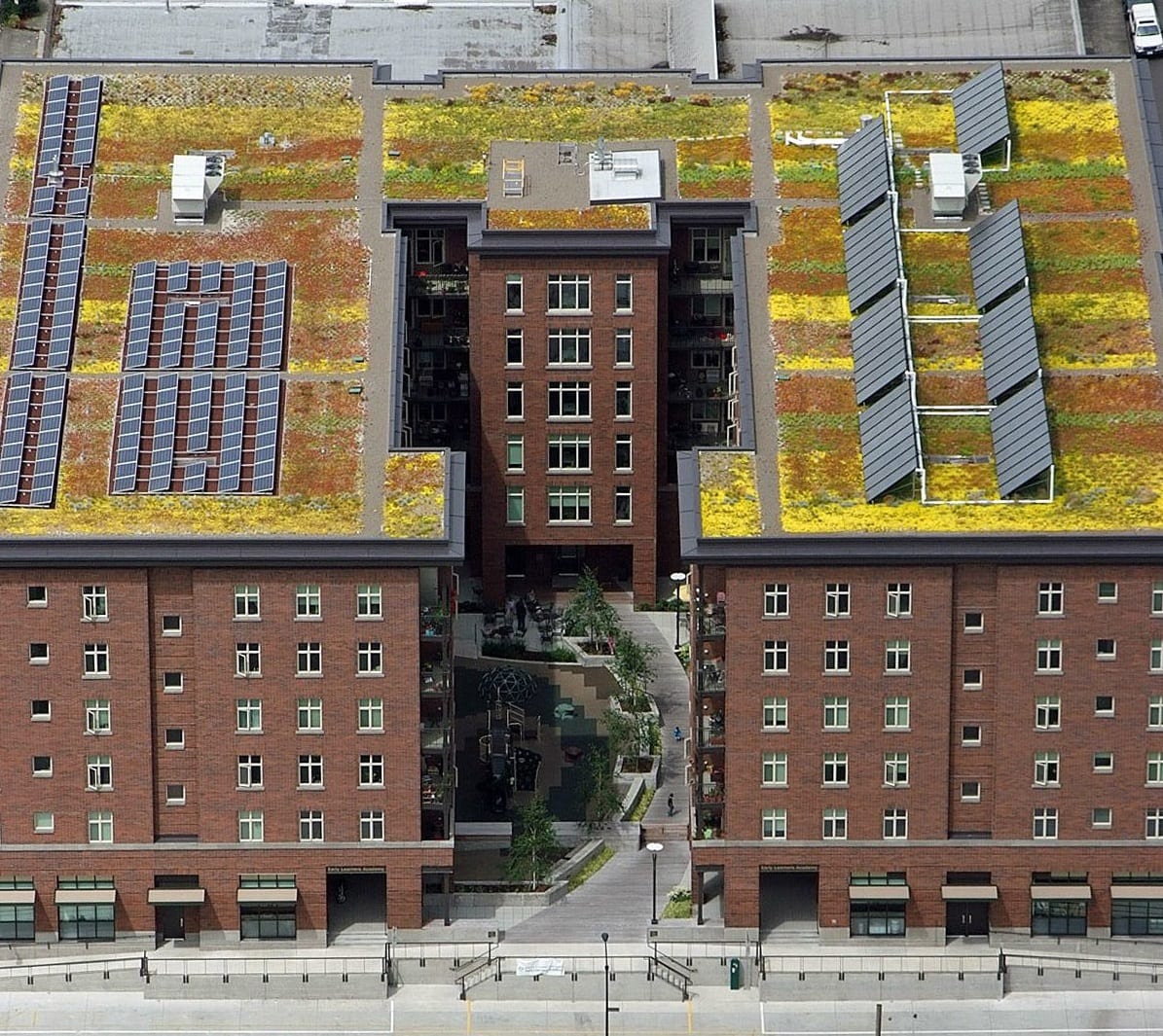 For more information about the City of Portland and ecoroofs, please visit the Environmental Services Ecoroof page.

Read the Ramona Apartments Ecoroof Final Project Report from the City of Portland where you can also see more construction photos.

The Ramona Apartments is a mixed-use, midrise apartment building consisting of six stories of wood-framed construction over a concrete podium. It includes 138 affordable apartments and ground floor facilities leased by Portland Public Schools and the Zimmerman Community Center. The Ramona is LEED-Gold certified and is located close to shopping, parks, the Portland Streetcar, coffee shops, and bike trails in the Pearl District near downtown Portland, Oregon.

Originally, detention vaults were designed in the basement to manage stormwater from the site but these were eliminated when the City’s Ecoroof Incentive grant was received. Two different soil types were installed, each 3.5″ deep on top of the filter fabric and 26 species of potted succulents and grasses were planted. The City of Portland provided flumes at two of the roof drains and will monitor the amount of stormwater released to the storm system.

Below the visible plants and soils of the Ramona’s ecoroof, there is a multi-layered structure that completes the building’s continuous air barrier, and provides moisture protection and thermal resistance. There is a leak protection system, a multi-ply SBS-modified bitumen membrane, protection board and a root barrier. A layer of drainage mat helps to hold more water on the roof and allows it to be used by plants or evaporate. It also allows water to flow to the drain without taking soil with it.

Pea gravel was installed for walking paths, along with red cinder to reduce overall weight of the green roof components to less than 20 lbs. per square foot. The depth of ballasted areas was designed to provide coverage over 100% of the waterproofing layer in an effort to extend the life of the membrane while also being as lightweight as possible. The walking paths were located along parapets and on the ridges between drainage basins to be at the highest points of the roof where soil and plants would have the most difficulty surviving. Paving stones were added in some areas to provide ease of access to mechanical equipment due to changes in PV panel layout during construction.

In the summer, the soil and plants are expected to keep the surface of the roof cooler and reduce the build-up of heat in the attic space and improve PV panel efficiency. As a rule-of-thumb, the efficiency of a solar cell decreases by 0.5% for every 1.8° F above 77° F. Portland State University researchers believe that combining an ecoroof with PV panels increases the efficiency of the PV panels by reducing the ambient temperature on the roof and are currently testing this. Additionally, low irrigation rates will be tested on different zones by the City because it’s anticipated that the solar arrays will provide enough shade for the plants to sustain themselves.

In addition to the ecoroof, the building’s courtyard contains permeable surfaces, plants, gravel and sand that are designed to filter and retain stormwater. Together with the roof, these elements treat one hundred percent of the property’s stormwater. Additional benefits of the ecoroof are the mitigation of the urban heat island effect and providing an environment for native habitat.

The Ramona’s roof also holds both a 30kWh photovoltaic array, expected to generate enough energy to run the Ramona’s elevators and hallway lights, and 64 solar hot water panels over the ecoroof, which will supply approximately half of the building’s hot water.