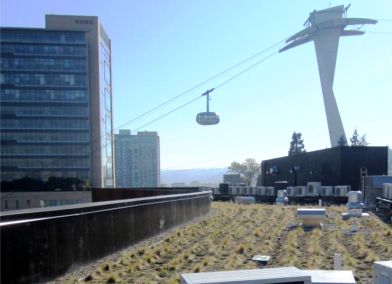 The Emery is looked at 3155 SW Moody Ave., Portland, OR 97201. Read the complete EMERY ECO-ROOF case study from ZGF Architects via the City of Portland BES.

The Emery is a mixed-use residence marketed for OHSU constituents and professionals that want to reside in the South Waterfront. The project is targeting LEED Silver certification. The project is located directly on Moody Ave., adjacent to the Ross Island Bridge, across the street from the OHSU Aerial Tram.

The project is the first development for the Zidell Companies on their 33-acres on the South Waterfront. The 118 residential apartments consist of studios, 1BR and 2BR units. There are two restaurant spaces located at the ground level at the north and south of the building and four smaller retail spaces. The 9,316 sf ecoroof was completed on October 7, 2013.

“The building sits on a constrained site bounded by the Ross Island Bridge to the north, Moody Avenue to the east, Macadam Avenue to the west and Grover Street to the south. In order to achieve the City of Portland’s stormwater management requirements in conjunction with a meaningful and thoughtful design, the innovative use of stormwater planters and ecoroof was the necessary solution.

“The roof areas use 4” pots to provide absorption of the rain and stormwater. Overflow runoff is collected by roof drains and is directed to on-site storm water planters. The eco-roof incentive program helped offset the ecoroof costs by approximately 47% and allowed the project to feature a beautiful and functional roof scape that can be seen from the aerial tram and surrounding buildings.

“Over 5,000 people ride the aerial tram daily. From that vantage point, the riders are able to see the roofscape of the neighborhood. One can consider the rooftop to be the “fifth elevation” and as such, the architect arranged the plants to create a diagram of the building organization, which can be seen from the tram once the plants are fully mature. The stormwater planters at the street level have been designed to integrate with the “porch” of the building, softening the edges of the concrete walkway and adding warmth to the street level. The planters also act as benches where customers of the retail shops can sit.

“The weather tolerant sedum species do not require much irrigation. The eco-roof is accessible through a stairwell and a roof hatch on the second star core. The roof has a dedicated hose-bib for use during the dry months in the summer. The roof will need to be monitored for invasive species (weeds). A bi-weekly weeding of one ¼ of the roof will be in the maintenance plan and rotate throughout the year. Once the roof is established and fully covered, the weeds will not have anywhere to grow,” (ZGF, 2013).