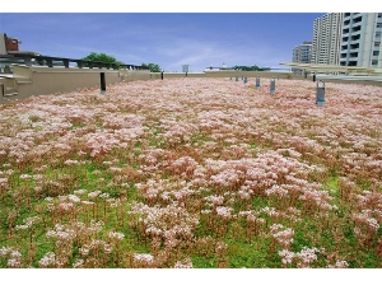 The Drs. Paul and John Rekai Centre consists of Wellesley Central Place and The Rekai Centre in dowtown Toronto. Sue Graham-Nutter, the director of communications and public affairs, said “The green roof at Wellesley Central Place is illustrating the evolving sophistication of the long-term care sector, while providing an eco-friendly environment that benefits the community at large,” and notes “the home?s green roof is ?one of the few? in Ontario.” Next year the home is inviting horticultural students to plant tomatoes, along with basil, thyme and other seasonal spices on the roof.Graham-Nutter says the idea to create a greenroof at the home came from Toronto?s famed Fairmont Royal York Hotel. The four-year-old home is also fitted with a large solar panel that is used to generate power for the home?s heating and cooling systems. ?We?re being responsive to the overall public policy,? says Graham-Nutter. ?(Long-term care) is not just (about) health in the most micro perspective ? it?s from a macro perspective. . . . On a macro level we?re helping with the environmental issues,? (Hamel, 2009).

The Drs. Paul and John Rekai Centre, Wellesley Central Place greenroof measures 9,750 ft using an ultra-lightweight green roof system by Xero Flor. “At a remarkable 1.4 inches (3.5 cm), the XF301 extensive system was easily installed in November of 2004 to meet construction deadlines. This is one of the only green roof systems that can be installed very late in the year or colder temperatures. The pre-cultivated vegetation blankets are grown locally outdoors and acclimatized to local weather conditions to ensure long term success.At the Rekai, sedum blankets were installed directly on top of the washed river stones on the inverted roofing system. Today, this self-sustaining green roof requires no permanent irrigation system, little maintenance and flowers in the summer to approximately 6 inches. Among other benefits, it is an urban bird habitat. Next year, the Rekai Centre will grow seasonal vegetables and spices such as thyme, basil and other spices on the roof to be used for the residents food, furthering the benefit of a green roof,” (CitiesAlive! 2009).