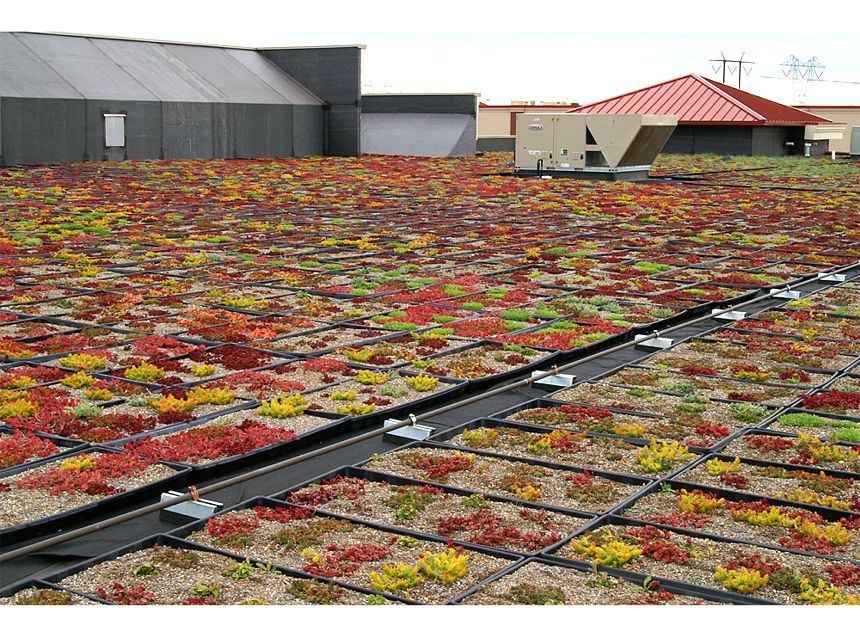 What was once an old drive-in theater in Upper Providence, Pennsylvania, has recently been converted into a 400,000-square-foot shopping center. The much-anticipated shopping center houses some of the largest retail giants in the country, helping to meet the growing community’s shopping needs. GreenGrid / Weston Solutions, Inc.? (WESTON) completed delivery of the largest modular green roof to date in the United States. The 2.3 acre, extensive GreenGrid? roof was placed atop a significant portion of the new Court at Upper Providence shopping center in Montgomery County, Pennsylvania. ?The Court,? a joint venture of two Montgomery County based developers, Gambone Development, Inc. and The Highland Development Group, Ltd., is a new 400,000-square-foot retail center designed by Architectural Concepts, LLP. Store anchors include six major national retailers. Developers and local officials took considerable time in planning the large facility in this semi rural and forested area. The goal was to improve the community, and not burden it with such a large structure. One key concern was the amount of storm water runoff it would create. Project developers were committed to using a green roof system to minimize the stormwater runoff and associated impacts on the surrounding watershed from these buildings. Occupants will also benefit from potential energy savings during hot summer months when the GreenGrid? system keeps the roof cooler than exposed roof surface. ?This green roof installation is an integral part of the project?s stormwater Best Management Practices and a key low-impact development strategy? says Jared Markham, Project Manager with WESTON and GreenGrid?. ?When the green roof is completed, it will both retain and detain significant amounts of rainwater year round.?

Many cities are encouraging developers to reduce the amount of stormwater runoff that follows a major rain event. As stormwater drains from buildings, streets, and parking lots, it typically does not infiltrate into the ground. Instead it becomes sheet flow that is eventually piped into a storm sewer system. Unfortunately, many cities rely on combined sanitary and storm sewer infrastructure that quickly becomes overwhelmed during even relatively minor rain events. As a result, already stressed collection and treatment facilities must release contaminated water directly into local waterways because they are unable to handle the increased flows.

The GreenGrid? modules, composed of recycled plastic were pre-planted with lightweight, engineered soil media and drought-tolerant vegetation including sedums and other small but hardy plants in early summer 2007. This project is comprised of 12,524 2’x4′ 4″ depth GreenGrid? pre-planted modules. When the modules were delivered this fall, an instant green roof topped the plaza. Weston installed approximately 6,000 square feet each day. The project was completed in just 17 days.