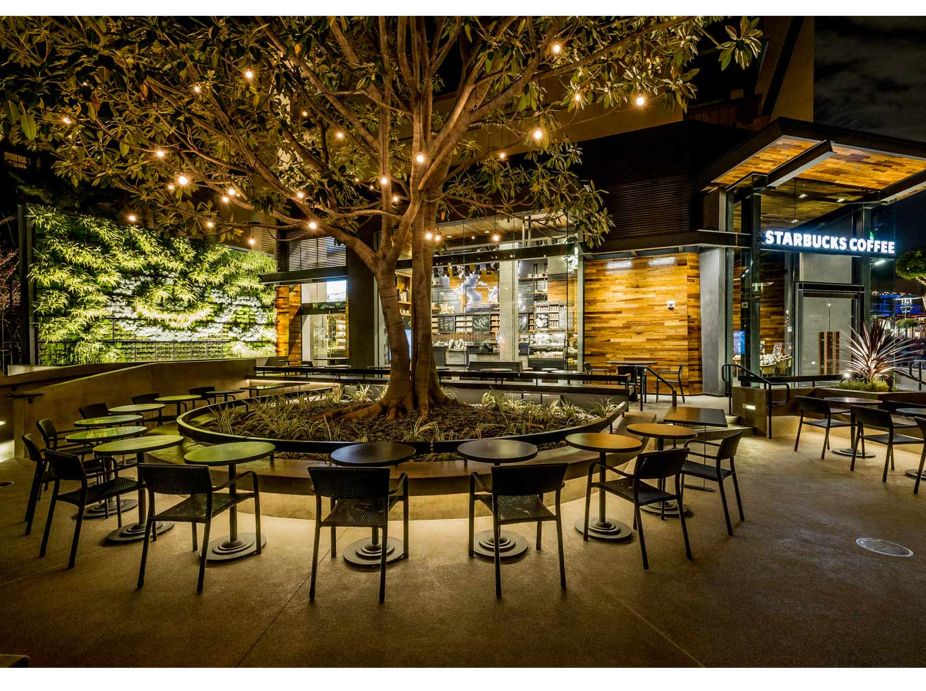 Learn about Tournesol Siteworks in The Greenroof & Greenwall Directory.

Since 1971, Starbucks Coffee Company has been committed to ethically sourcing and roasting high-quality Arabica coffee. Today, with stores around the globe, the company is the premier roaster and retailer of specialty coffee in the world. Opened on July 17, 1955, Disneyland Park, originally called Disneyland, is the first of two theme parks built at the Disneyland Resort in Anaheim, California, and is the only theme park designed and built under the direct supervision of Walt Disney himself. Starbucks opened a new LEED-certified store here in the Downtown Disney District in April, 2014. Over the next year, Starbucks and Disney will bring five more Starbucks locations to guests.

Located right outside the exit of the huge World of Disney store is the beautiful living wall at the new Starbucks, offering a first-of-its-kind Starbucks experience engaging guests through its expanded size and 2,300 sf outdoor patio and sustainable materials, partially made with reclaimed wood from old railroad boxcars. Inside, the 5,600 square foot 150-seat restaurant has a 10-foot, nine-panel LED screen above the Clover bar and the video installation keeps Starbucks and Disney guests entertained with imagery of places where Starbucks grows and harvests its coffee beans. A chalkboard-like interactive touch screen encourages guests to sketch their own artwork.

“Starbucks unveiled its newest store at the Grand Opening of its new Downtown Disney location at the Disneyland Resort in Anaheim, CA. The world’s largest coffee chain opened the first Starbucks owned coffee shop on a Disney property. Though a few Starbucks stores exist inside Disney theme parks, they are operated by Disney. The unique indoor / outdoor, eco-friendly store is built around an old tree to LEED standards and highlights an outdoor wall designed with 1,000 native plants in the shape of a coffee cup. The interior is partially made with reclaimed wood from old railroad boxcars. Located just outside Disney’s Grand Californian Hotel the store will offer rare coffees in addition to its conventional menu along with extended hours for its customers,” (Architect Orange, 2014). Originally inside an existing planter, the mature Ficus tree between the shop and the World of Disney store was preserved, with the new Starbucks patio area built around it with care.

Referring to its tenant, Starbucks, the Disney website says “Cozy up to your cup in this modern rustic setting as you discover tempting aromas and explore a world of flavors. Relax and recharge in the lush outdoor patio or enjoy an interactive touchscreen wall that will inspire moments of creativity in even the youngest of minds,” (Disneyland website, 2014).

The client, Starbucks, wanted something particularly eye-catching and unique at their location, which is sure to be one of the busiest spots in Downtown Disney. Architects Orange and LandStudio 360 with David Ling were tasked to bring that unique element to this specific Starbucks store, and Tournesol Siteworks was thrilled to be offered the opportunity to also be a player in this high profile installation.

The designer, David, and grower, Greg from Instant Jungle, conceived of a green wall that would create a visually interesting, yet relaxing space for the store. The living wall at Starbucks Downtown Disney measures 15’ H x 22’ L. There are 78 Tournesol Siteworks VGM modules with Isotoma, reverse spider plant, Senecio serpens, and dwarf mondo grass on drip irrigation. The VGM system was the perfect solution. At the heart of this living wall product is a recycled plastic planting module attached to stainless steel hanging rods.

In this case the vertical hanging rails were mounted onto horizontal uni-strut framing. The framing, attached to the tube-steel substructure, allows for flexibility when aligning the hanging rail. Each planting module is available with a generous 4″ soil profile which allows for healthier plants and lower maintenance.

The modules were shipped to the job site already grown-in at Instant Jungle’s nursery for approximately 3 months. Instant Jungle also pre-assembled irrigation emitters and tubing into the module, so it could quickly be attached to the main irrigation system once hung on the rails. The modules and rails can be installed on any type of structurally sound wall. The modules can easily be removed to change plants or get at the substructure at a later point in time.

Over time, the mondo grass was removed due to sun and heat issues. Greg from Instant Jungle who maintains the Starbucks Living Wall says, “Continued maintenance of a greenwall involves being aware of heat issues, having to exchange bottom plants periodically and to vary the wall with plants that can adjust to the weather. The key to a long-term, flourishing greenwall is the investment in care and maintenance. Treat the greenwall as a living wall, an actually ‘living’ project, needing routine checking on, caring for, and feeding of the plants over time. It’s important that whoever is in charge of the plants after any installation understands the choices and varieties of greenery; the plants need to coexist,” (Tournesol Siteworks, 2016).