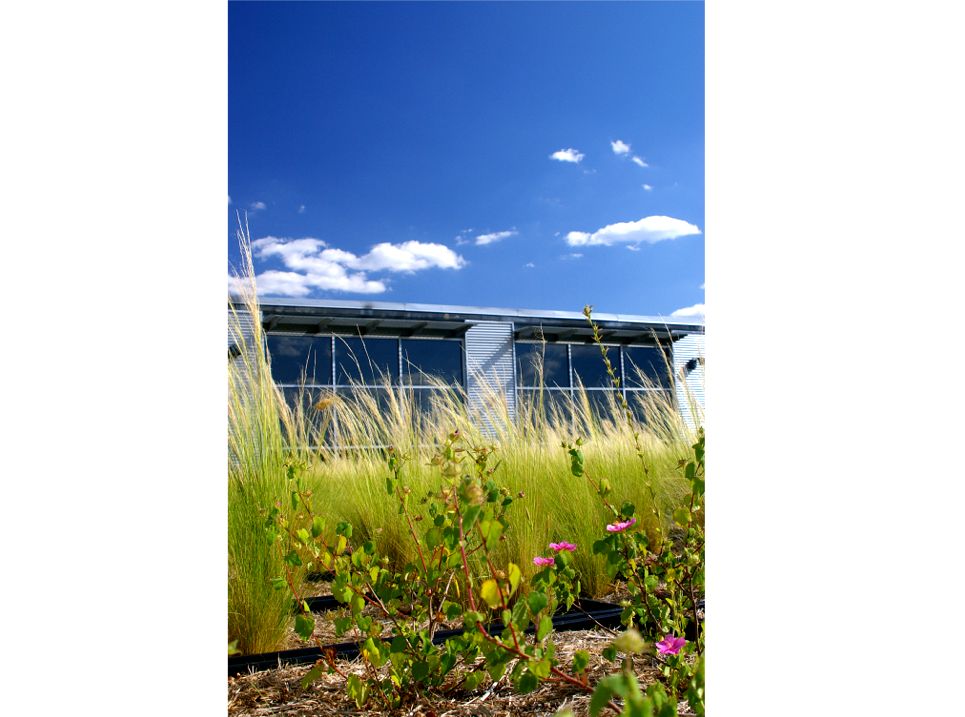 Learn more about the Lady Bird Johnson Wildflower Center here, and the greenroof research project at www.texasgreenroofs.com. Learn more about GreenGrid in The Greenroof Directory here. Read the statesman.com article here, and for more information on The Austonian, please visit www.theaustonian.com.

The Circle C Ranch, in southwest Austin, TX, is a planned community of approximately 12,000 people-and one of the most environmentally sensitive communities in the United States, according to Laurie Swan, Vice President of Stratus Properties, developers of the community. A prized community to live in, Circle C previously lacked one important element: There were few places to shop-not even for a cup of coffee. Stratus corrected this by developing a village-style retail center that also housed the town’s first Starbucks. The company also believed this was an opportune time to test the effectiveness of a green roof and push the environmental envelope all at the same time.Swan turned to the nearby Lady Bird Johnson Wildflower Center for help with the project. “They brought in an environmental designer, who suggested we install a modular Green roof system developed by GreenGrid, a business of Weston Solutions,” says Swan. With this system, modules filled with soil and plant media, are pre-assembled at a nursery and then laid out on top of the existing roof. “The whole process took just a couple of days,” says Swan. Stratus Properties wanted to do something special with this retail center because it is located in such an environmentally sensitive area. And installing a green roof helps make it greener from the top down.The Circle C Escarpment Village Starbucks greenroof was completed in October, 2005 and the living roof can be seen from inside Starbucks through large glass windows. Meridian was contracted to design and install integrated solar-electric and solar thermal systems for Starbucks. While the developer, Stratus Properties, approached the entire development in an environmentally conscious way, the Starbucks is particularly noteworthy with its translucent solar array, greenroof, native landscaping, and rainwater catchment systems.

According to Mark Simmons, a Wildflower Center ecologist, hot sub-tropical regions like Austin have performed little research on the viability of greenroofs, let alone those only planted with natives, which is the case here. Plants include several prairie grasses, rock rose, agarita, Virginia creeper and crossvine. An article by Julie Bonnin in the March 21, 2006 Austin American Statesman Life: Gardening section states “The plants were selected by Heather Venhaus, an environmental designer with the Lady Bird Johnson Wildflower Center. “We mixed plant knowledge with a little bit of science knowledge with a little bit of guessing,” Venhaus says.” The article goes on to say that greenroofs biggest environmental benefit in Central Texas may be related to stormwater runoff in sensitive watershed areas, and plans are underway for the City of Austin to begin measuring stormwater runoff at the Stratus building later this year. Roger Glick of Austin’s water quality monitoring department says they will compare it to the data currently being collected at the Wildflower Center.The Austonian named the Lady Bird Johnson Wildflower Center its charity of choice for 2007 and is providing support for its initiatives, including the green roof project, through a comprehensive package that will exceed $400,000, including the gift of a Wildflower Center membership to each condominium purchaser.