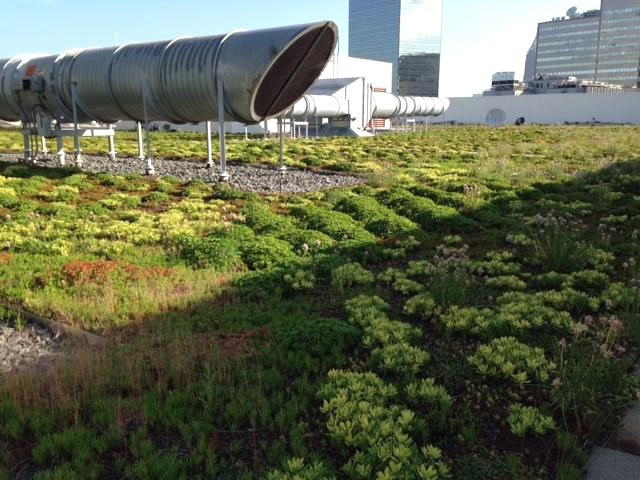 See the Sustainable Project Profile from Tremco and the Featured Project from Greenrise Technologies. See more photos from the EPA Region 4’s Facebook page from a recent tour by the fellow tenant GSA in 2015. Read the June 18, 2012 Greenroofed Sam Nunn Federal Center Dedicated in Atlanta! by Linda Velazquez in the Sky Gardens Blog.

Learn about Tremco in The Greenroof & Greenwall Directory.

The former site of the iconic Rich’s Department Store (Atlanta’s most popular retailer throughout the late 19th and 20th centuries), the present Sam Nunn Atlanta Federal Center serves as the home of several federal agencies, including the GSA and EPA Region 4, and is one of Atlanta’s most environmentally friendly facilities. For example, the high-rise building of the Samuel Nunn Atlanta Federal Center houses a forested courtyard with a stand of approximately 50 maple trees, flowering cherry trees, and various other deciduous species, as well as native drought-resistant vegetation and paths of semi-pervious concrete pavers.

Restoration and construction were completed in phases, with the first in 1996 and the final phase in 1998. Situated in a U-shaped configuration in central downtown Atlanta, the center includes the former six-story Rich’s Building and its beloved clock as the cornerstone of the facade (1924), the 10-story Midrise, the eight-story Bridge Building and the 24-story high-rise Tower.

In 2011 the Sam Nunn Atlanta Federal Center received the inaugural RoofPoint Award from the Center of Environmental Innovation in Rooﬁng (CEIR) for “Excellence in Life Cycle Management,” distinguished by its efficient re-use of original roofing materials; in 2005 the center was named an ENERGY STAR Building; and in 1999 the facility was named the Building Owners and Managers Association (BOMA) Government Building of the Year for the Southeast Region.

In testing the roofs’ structural integrity, it was determined that part of the Rich’s portion, approximately 10,000 square feet, could not support a vegetated roof; it was changed to a white, 60 mil, Tremco ﬂeece back Thermoplastic Polyoleﬁn (TPO) roof membrane “Cool Roof” over polyisocyanurate insulation (R-20 value).

Things worked out beautifully, both literally and ﬁguratively. The two vegetated roofs are highlights of the buildings, with more than 198,000 colorful sedums, delospermas, native cacti, alliums and more from Saul Nurseries. Installed by Greenrise Technologies, they were planted 3/sf and are set in 4″ of growing media from ItSaul Natural in a planting plan designed by Tremco Rooﬁng’s Mary Ann Uhlmann. And, Mary Ann has set aside a small area for plant testing and propagation.

The combination of rooﬁng systems is meeting the project goals as well, providing such beneﬁts as a lower installed cost than planned, cutting heating and cooling costs, reducing stormwater runoff by more than 600,000 gallons, and reducing the strain on rooftop HVAC equipment. A 20-year Tremco roof membrane warranty and separate Plant Establishment Warranty will enable the plants to thrive while helping protect the roofs.

The collaborative efforts of the National Building Contractors, Inc. (A Woman Owned Business) team and the GSA designed a vegetated roof system that not only reduced greenhouse gas emissions but also recycled 80% of the existing roof material including the pavers, waterproofing membrane, and rigid insulation.