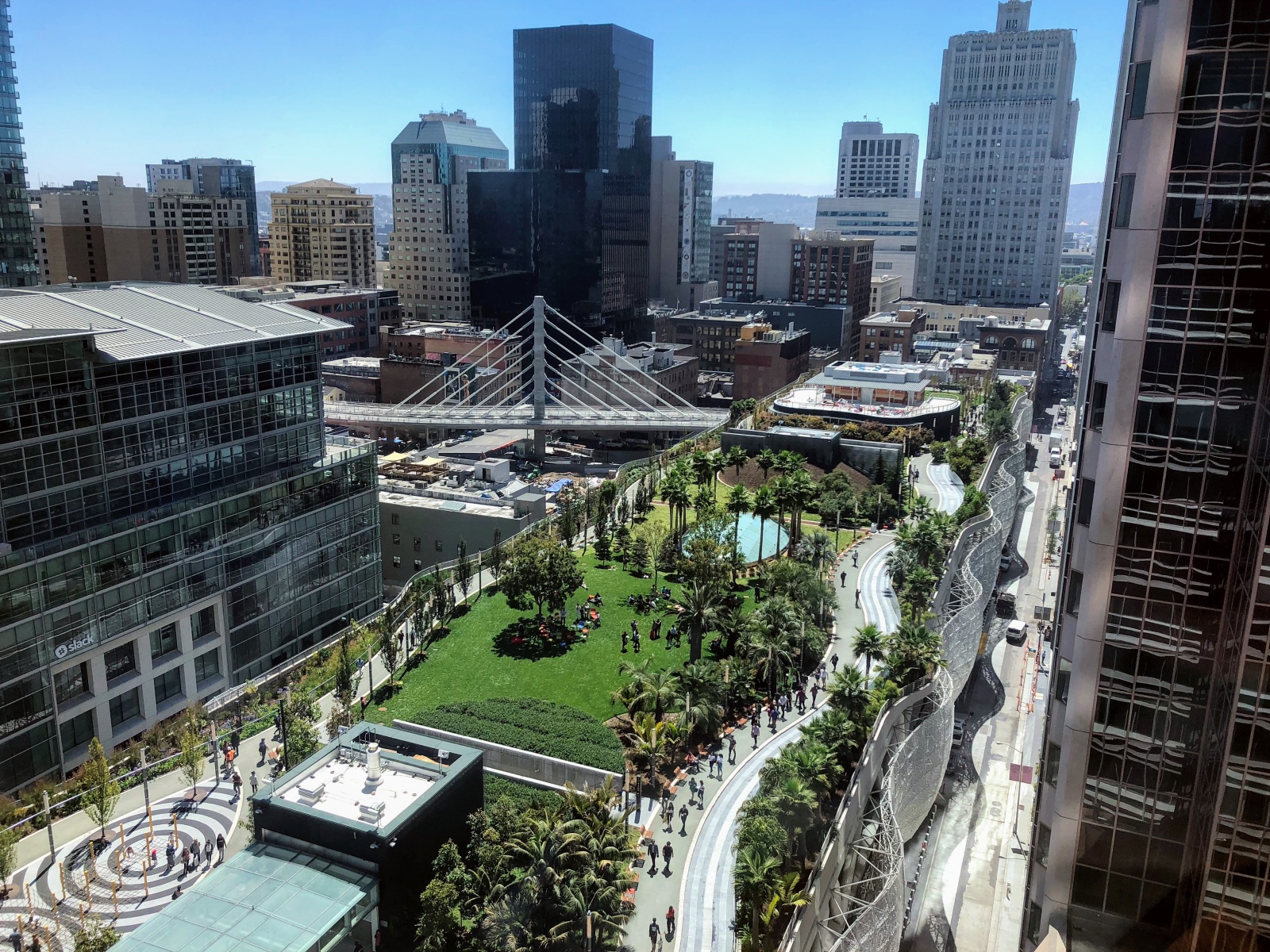 All Are Welcome to the Salesforce Transit Center

The 5.4 acre LEED Gold Salesforce Transit Center Park sits atop the new state-of-the-art Salesforce (previously known as Transbay) Terminal Center. The Transbay Terminal Center and Tower stand 70 feet-tall and stretch from Beale Street to Second Street. The structure houses commuter buses from around the area and provides the region with 5.4 acres of green space.

“Salesforce Transit Center is a landmark for the San Francisco Bay Area. A sociable, open space for people to gather, it’s grand and bold in design, yet built for simply having a good time. This striking, innovative, and sustainable building transforms a transportation hub into an urban experience, complete with a gondola, and topped off by a 5.4-acre rooftop park open to the sky.

The Transbay Transit Center was designed to centralize the region’s transportation network by conveniently connecting all points in the San Francisco Bay Area for more than 100,000 passengers per day. The TJPA built a state-of-the-art bus and rail station – the “Grand Central Station of the West” – that will accommodate eleven transit systems from the Bay Area and Southern California. The new Transit Center will make world-class public transit options accessible, seamless, safe, and efficient.” ~ Salesforce Transit Center

Salesforce paid $110 million to have its name on the Transbay Transit Center and an estimated $1.5 million per year will be spent on maintaining the park’s tranquility in the heart of San Francisco.

“The new Transit Center stretches for five blocks along Mission Street, one block south of the city’s Financial District. A gently undulating wall, floating above the street on angled steel columns, is visible from afar, creating a graceful, luminous, and welcoming image. At street level, shops and cafes draw visitors and energize the surrounding neighborhood, while high above, the trees and flowers of the rooftop park invite people to visit for longer periods, transforming the Transit Center from a commuter hub to an urban destination.

The heart of the Transit Center’s design is the rooftop park. Dense with nature and activities, it has over a dozen entry points, potentially including bridges to surrounding buildings. Active and passive uses are woven into the landscape, including a 1,000-person amphitheater, cafes, and a children’s playground, as well as quiet areas for reading, picnicking or simply taking a break. The park presents a wide variety of Bay Area ecologies, from oak trees to a wetland marsh.” ~ Pelli Clark Pelli Architects

The major project elements include:

• A Grand Hall entrance lobby and a rooftop park

Arup’s unique combination of consulting services provided the architectural team and the owner with real-world guidance and engineering inspiration.

“Arup’s involvement dates back to 1998 when we, as part of the Richard Rogers Architecture/SMWM team, were selected by the Metropolitan Transportation Commission to prepare the Transbay Terminal Improvement Plan. We began work on concept validation in June 2008 and provided complete engineering design, as well as bid phase and construction administration services though project completion. In total, Arup provided complete civil, geotechnical, and bridge/highway engineering design services, as well as transport and pedestrian planning, extreme events evaluation, pedestrian modelling, fire and life-safety review, tunnel ventilation design, and rail coordination for this landmark addition to San Francisco’s mass transit infrastructure.” ~ Arup

“In September 2018, workers discovered two fissures in steel beams on the bus deck above Fremont Street. After several inspections and out of an abundance of caution, the Transbay Joint Powers Authority (TJPA) temporarily closed the Transit Center.

This is a localized issue within the transit center. The TJPA’s contractor installed a multi-level shoring system at Fremont and First streets as an independent review and monitoring continue. No additional fissures have been found.” ~ TJPA Press Release, 2019

“The park design is composed of curving paths that lead visitors through different experiential settings, both contemplative and social. In order to create a topography that blurs the distinction between roof and ground, the park integrates mounded vegetated hills with domed architectural skylights that allow daylight into the terminal below. Feature gardens and special plantings highlight the plant communities that thrive in San Francisco’s Mediterranean climate and the relative warmth of this rooftop location. Public art punctuates the entire facility including the rooftop park with a dynamic Bus Jet Fountain, by environmental artist Ned Kahn, that expresses the movement of buses within the building below.” ~ PWP Landscape Architecture

Rana Creek, the California-based company specializing in habitat restoration and regenerative design, was selected the Lead Ecologist for the 5.4 acre Salesforce Transit Center Park in late September, 2007. Paul Kephart, Executive Director of Rana Creek stated, “Rana Creek’s design will promote extensive energy savings for the Transbay Terminal Center as well as provide thriving habitats for Bay Area native plant and wildlife populations threatened by urban development. Not only will this green roof provide the people of San Francisco with a much needed public park, it will protect the endangered species, such as the Bay checkerspot butterfly, that have all but disappeared from this urban area.”

Initially, the name of the 5.4-acre rooftop park on top of the Transit Center was to be “City Park,” but has been renamed Salesforce Transit Center Park. The massive rooftop park includes an open air amphitheatre, gardens, a trail for running/walking, open grass areas for picnics, lily ponds and more. Designed to house more than six native plant communities, the Salesforce Terminal Center’s green roof features bodies of water, statuesque trees and an urban park dedicated to sustainability.

The project treats all water from the neighboring 82-story Salesforce Tower as well as filters and processes the exhaust from the below railways. Kinetic fountains powered by the bus movement aerate the water for the rooftop wetlands. In order to create the most ecologically functional green roof, Rana Creek used native plant communities, such as grasslands, that survive in similar bioregional conditions. The green roof build-up system consists of a root barrier and water drainage system.

San Francisco City Guides: Created in partnership with the Transbay Joint Powers Authority, which operates and manages the Transit Center, the Salesforce Transit Center tour offers walkers the opportunity for a leisurely stroll of the stunning public spaces in this tour-de-force of post-modernist design, to learn about its features both functional and fantastic. Led by trained and experienced volunteers from San Francisco City Guides, walkers will tour the soaring Grand Hall, experience the Center’s multimedia public art and a “secret garden,” visit the renowned rooftop park of lush gardens, and take in unmatched skyline views from among the tallest buildings in the West.

For more information about the Salesforce Transit Center tour and to reserve a spot visit the tour page.