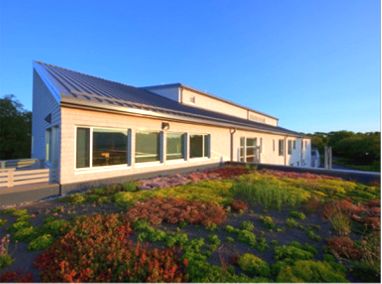 The Potter League is an ‘open admission’ shelter which is able to help as many pets as possible. Annually, the Potter League houses about 1,900 animals and provides pound services for Middletown, Newport and Portsmouth, Rhode Island. The center facilitates adoptions for 1,100 animals a year and returns 450 lost pets to their owners. In 2004, their Board of Directors realized it was more cost effective to replace the worn, outdated and inefficient 32 year old structure with a new state-of-the-art shelter and education resource center. The new facility opened in November of 2008 with homelike housing which replaced the old concrete and wire fenced kennels.

“The $7.5-million shelter is more than twice as large as the current shelter, at 19,500 square feet. The new building has a number of other “green” features, such as a focus on natural lighting and fresh air, recycled building materials, water conservation measures, a gravel parking lot to absorb runoff and a 15,000-gallon cistern to capture and treat runoff water so it can be reused to flush toilets and clean animals’ cages.

“Potter League officials said they chose to go green for the new shelter because its location, off Oliphant Lane, is on wetlands and close to Bailey Brook, which eventually feeds into North Easton’s Pond, a drinking-water source for Aquidneck Island,” (Wims, 2008).

The Potter League for Animals greenroof is located over the adoption shelter and uses a Roofmeadow 6″, semi-intensive system established with plugs and 4″ pots, with Sika Sarnafil providing the waterproofing and Apex Green Roofs as the greenroof contractor. Installed on September 25, 2008, this project in an un-irrigated intensive system which supports a large variety of succulent and herbaceous plant species including lavenders, alliums, sedums and grasses, chosen specifically for their tolerance to wind, heat and drought.

The facility also has a rain water recovery system that collects water from the roof surfaces and diverts it into the 15,000 gallon underground cistern. Stored water is then treated and circulated throughout the building to interior hose bibs, exterior wall hydrants and the flush toilets. Low flow fixtures and native and adapted species used in the landscaping and vegetated roof further reduce water consumption. These design measures reduced potable water use by over 80%.