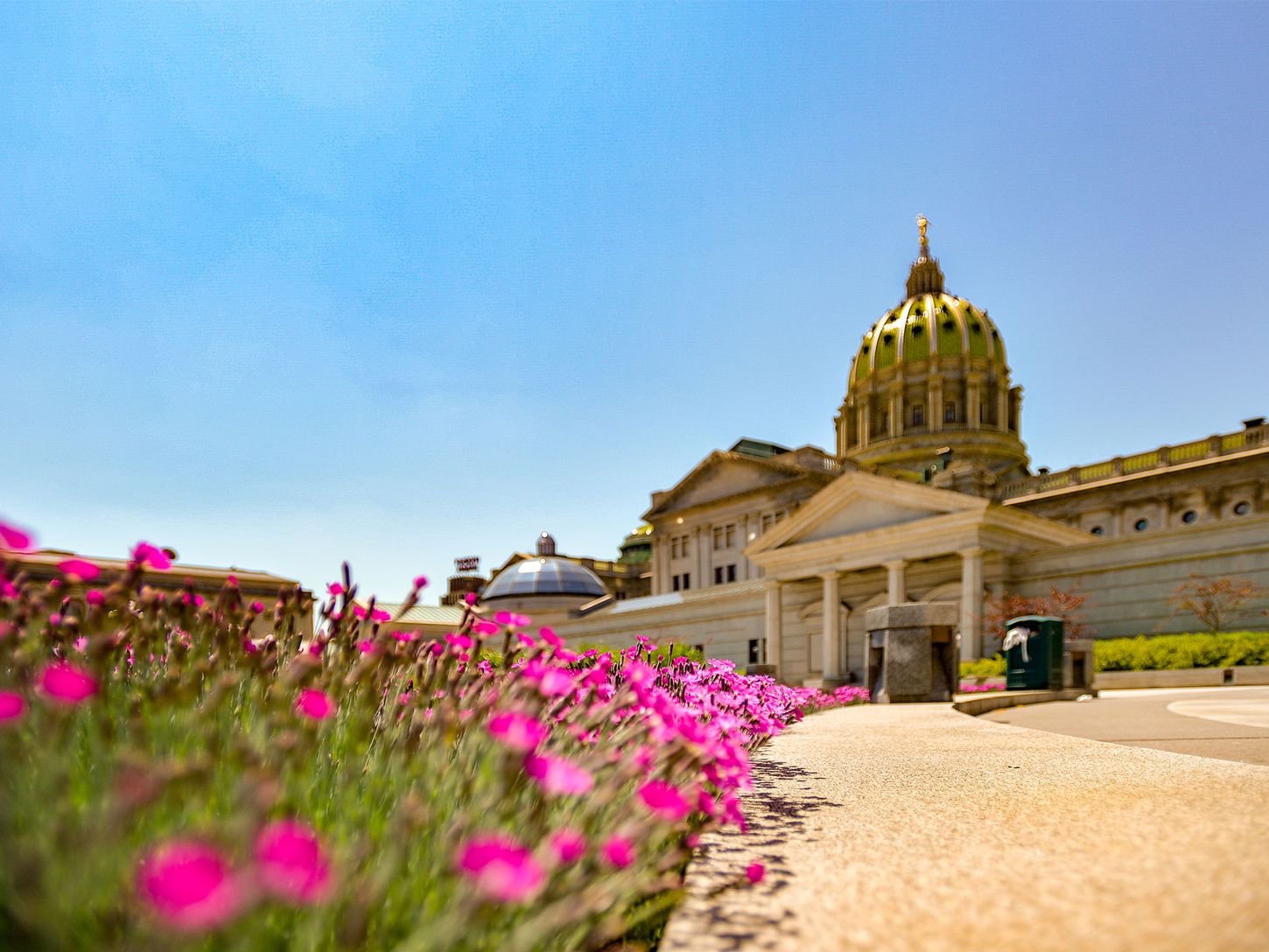 Visitors to the Pennsylvania State Capitol Complex must use the public entrances – East Wing Entrance at the Fountain on Commonwealth Avenue (also the handicapped entrance), and the Main Rotunda Entrance at Third and State Streets; visit the website. Due to safety regulations, all tour groups, even those that are not conducted by General Assembly Tour Guides, are required to schedule their tours through The Pennsylvania Capitol office at 1 800 868-7672.

Learn about the following companies in the Greenroofs.com Directory: rooflite and Tremco.

Greenroofs.com Project of the Week for August 27, 2018: Pennsylvania State Capitol East Wing Plaza by Linda S. Velazquez; July 8, 2015 Ongoing renovations and repairs take over the Capitol Complex: take a look at what’s being upgraded by Morganne Mallon in PennLive;  October 8, 1989 A Bit of Old Athens on the Susquehanna by Paul Goldberger in The New York Times (PDF).

The Pennsylvania State Capitol building is a functional seat of government where laws are passed and the public policy is set for over 12 million residents of Pennsylvania. It is also a priceless architectural and artistic treasure, a majestic symbol of history and power, and an icon of democracy and freedom.

The Complex sits on the southwestern area of Harrisburg upon a broad hill facing westward toward the Susquehanna River. This third and current Capitol building was designed by architect Joseph Miller Huston in 1902-1906 in a Beaux-Arts style.

The Pennsylvania State Capitol was listed on the U.S. National Register of Historic Places in 1977, and was designated a National Historic Landmark in 2006. Visitors are welcome to explore the Capitol building at their leisure, but see below regarding required scheduling.

“The main objective of the $140 million East Wing Addition project to the Pennsylvania State Capitol was to merge four existing National Landmark buildings into a complex serving more than 6,000 people. The merger was accomplished by building a 929,000 SF Legislative office Addition to the Capitol, connecting the four structures and 20,000 square feet of renovation and restoration of the existing building.

Above the underground garage, the new addition to the main Capitol Building incorporates a 250,000 square foot plaza, an office/concourse level connecting all buildings, and an additional 300,000 gross square feet of office space for the State House of Representatives and the Senate.” ~ Celli-Flynn Brennan/Buchart Horn Architects.

A $19+ million project renovation to the Capitol Complex was needed 30 years later. Vitetta Architects & Engineers were selected to repair and revitalize several areas due to deterioration after continual exposure to the elements over the years. In particular, the sheet-applied waterproofing system below the paver and pedestal system of the East Wing had begun to fail at its numerous seams and moisture had begun infiltrating the occupied spaces.

Renovation to rectify the problem required taking up all of the landscaping covering over 260,000 square feet of area. About half of the project included planters and 40,000 square feet of vertical surfaces so the TREMproof 250GC with its trowel-grade version helped to ensure no areas were left untreated or exposed to moisture infiltration. TREMDrain GS drainage mat was used over the membrane to enhance the performance of the waterproofing system by functioning as a water retention layer while designed to also prevent root growth. Tremco Commercial Sealants & Waterproofing completed the design for the renovation and upgrade on the project in September of 2013.

“Daniel Vodzak, regional director of the architecture and engineering firm Vitetta in Harrisburg, Pennsylvania, wanted to avoid the potential for leaks at seams, so a sheet-applied waterproofing membrane was not a consideration. With the configuration of the plaza including curving walkways and a multitude of planters, the waterproofing needed to be able to conform to any geometry. Another requirement was a 25-year warranty.

Since concrete is naturally porous and fine cracks will occur over time from expansion and contraction due to climate changes, the selection of products for use above inhabited areas is particularly important. The potential for leaks must be eliminated and fluid-applied coatings were the preferred choice for waterproofing due to their ability to provide a seamless water barrier along with the ability to elongate to bridge cracks that develop over the years.” ~ Tremco Commercial Sealants & Waterproofing

In 2016, the extensive East Wing renovation was completed, just in time for the inauguration ceremony of Tom Wolfe, the state’s 47th governor, to include legislative office space and underground parking in the 950,000 square foot building. The renovation of the Pennsylvania State Capitol East Wing includes a new intensive green roof built into the main plaza, which frames the Pennsylvania War Veterans’ Memorial Fountain, the building, and the Capitol Dome.

rooflite(R) says the building renovation provided modern green roof technology in place of an aging, legacy green roof on a project originally installed more than three decades ago. The previous soil suffered large volume loss over time, and the architect wanted to specify a growth media that would resist compaction and volume loss and allow the diverse plant palette to thrive.

For rooflite, logistical issues centered around the enormous project involved product engineering the custom growing media and then stockpiling the material around an open, active public building. To meet these needs and to take advantage of the relatively high weight loads for the project, rooflite designed a specific soil blend: rooflite intensive 800. And in the end, rooflite managed to pull off the huge staging dilemma with 299 tractor trailer loads of growing media pneumatically installed.

“Our history on the project dated back to the Capitol Grounds Maintenance staff. They wanted to remediate very old 1980’s topsoil that had done what many high organic matter soils will do over time: overcompacted and suffered volume loss through OM (organic matter) breakdown,” says rooflite’s Joe Donnelly. “The planters were a foot or two below their ideal fill height from years and years of settling and breakdown. But eventually it was determined that just adding high quality engineered soil on top was not the solution. Leaks in the underlying waterproofing needed to be repaired, and eventually a whole roof replacement was drawn up.”

As a result, all existing site soils were removed from the planters, removing (and cataloging for reinstallation) all of the granite pavers, and tearing the roof down to the substrate. The roofer found some surprises that weren’t on the plans – for example, granite pavers being used as a “separation layer” between the soil and drainage aggregate. The State took those, and they weren’t reinstalled.

“From the early stages we worked closely with Capitol Grounds Maintenance and eventually Vitetta Architects to engineer a soil that was both efficient and cost effective. It needed to address the failings of the previous soil, namely longevity, and have properties like high water holding capacity, be well aerated, resist excessive compaction, resist volume lost over time, and stand up to the test of time. AND do all of this on a governmental renovation budget, at a massive scale.

That’s what led to the development of rooflite intensive 800, a nominally heavier version of our bread and butter intensive media for the mid-Atlantic with the same high quality our green roof industry clients have come to expect.” ~ Joe Donnelly, 2018

Because the project was for the State of Pennsylvania, they were able to provide an offsite staging area under a bridge that afforded rooflite ample storage space in a dry environment. The project was an “all summer” affair that dragged out into the fall. There were some remnants and late stage additions that crept into the next year, but for the most part the soil was installed over the course of about four intense months. The growing media was blown into place by Downes Forest Products, and as such rooflite had to keep all of the components reasonably dry over the installation period – not just onsite, but at production. The late Tilson Group installed the plants.

Joe says the only downside is that larger plant stock wasn’t selected. But with an upgrade to modern green roof technology, this assembly should thrive easily for decades to come, with plenty of time for things to grow in!

The classic majesty of Pennsylvania Capitol’s East Wing was restored, with sweeping walkways of granite pavers, seating areas, and planting beds with a multitude of trees and flowering bushes and perennials complementing the Renaissance Revival architecture. Veterans’ Memorial Fountain, located behind the East Wing, generates computerized water displays for visitors and state workers during warm months.

Logistics were a special challenge for this project because Congress was in session throughout the installation, but the Pennsylvania State Capitol is thriving and bringing nature to the East Wing Plaza for visitors, legislators, and the public alike. The East Wing green roof is open to the general public daily.