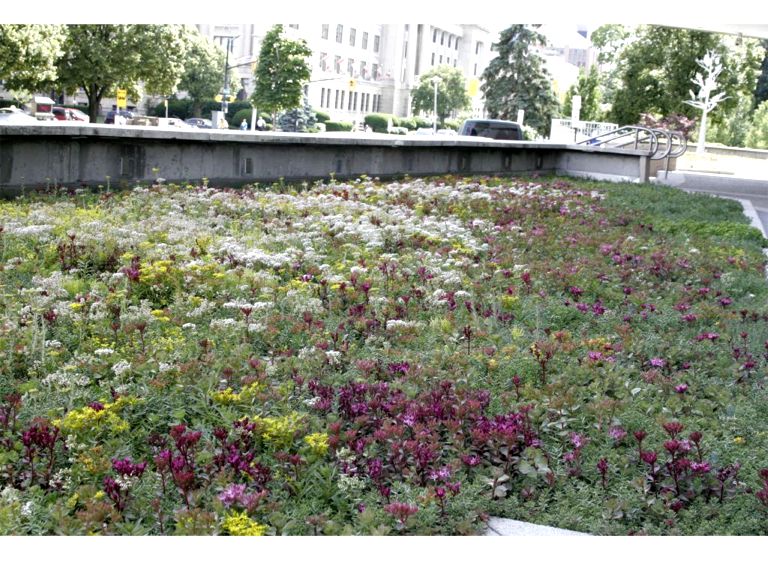 LiveRoof is a registered trademark of LiveRoof, LLC, Spring Lake, Michigan. Caradoc Green Roofs Ltd is an authorized distributor and grower of the LiveRoof modular green roof system for the provinces of Ontario and Quebec. Contact Caradoc Green Roofs Ltd at: [email protected] or visit them at: www.caradocgreenroofs.ca. See the LiveRoof listing in The Greenroof Directory here.

The City of London started planning for the re-roofing of the main deck at London City Hall in the fall of 2006. The main deck is a publicly accessible area immediately adjacent to the front doors to City Hall. It is a favourite break and lunch time retreat area for city staff and as such has a lot of public use on a year round basis.A green roof was deemed desirable for a variety of reasons. The aim was to reduce especially summer energy use in the offices and work areas located immediately below the deck. It also functions to soften the architectural lines of the plaza deck and provide important green space for city staff and visitors. This is the first green roof undertaken by the city as part of its environmental management plans, and functions as a demonstration project for the city and its community.

The green roof at London City Hall was installed over a newly installed inverted membrane applied to the main deck at London City Hall during the summer of 2007. LiveRoof was chosen as the system of choice because of the modularity and pre-finished nature of the product. Because of a long history of roof problems at City Hall, it was not deemed desirable to install a conventional extensive green roof with the associated difficulty of accessing the underlying membrane and flashings. A modular system was a must. It also had to be installed and maintained by London Parks Department employees.As a result only one system was deemed desirable for the site, LiveRoof. It comes to the site in 12×24″ modules, grown with a plant palette selected by the City to full coverage. The modules were grown less than 30 miles from the city at Caradoc Green Roofs and transported to the site in tractor trailers on two seperate dates in Sepetember and October 2007. Total installation time for the two sections was approximately 6 hours total with a crew of 6 people. The main deck was opened up to the public immediately after installation was finished and looked like the green roof had been there all along. Due to its prefinished nature maintenance is minimal.