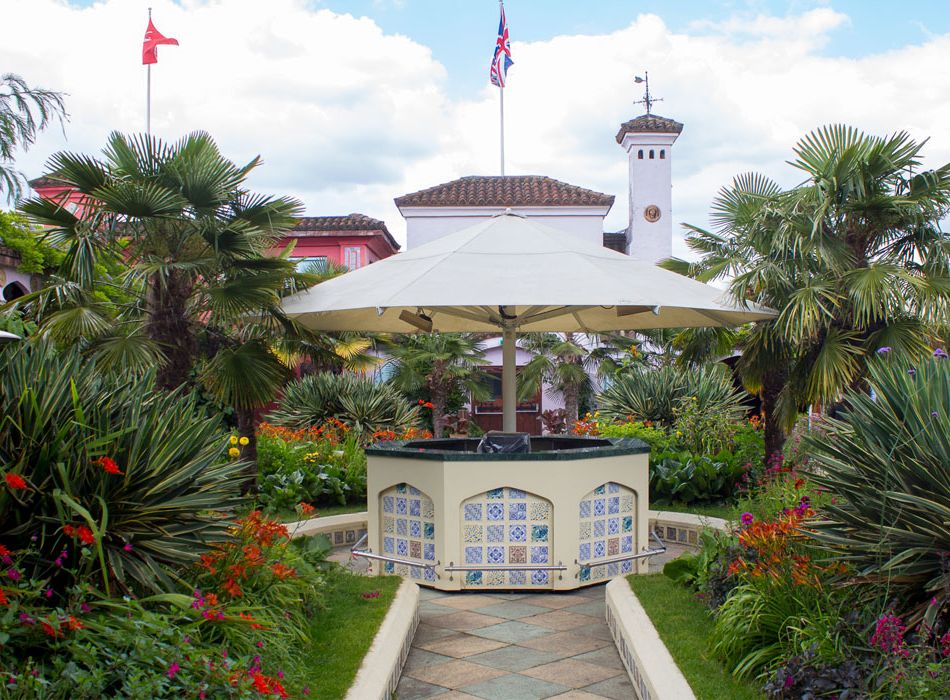 Watch the 3:18 Kensington Roof Gardens – Project of the Week 5/7/18 video from Greenroofs.com on the greenroofsTV channel on YouTube. Greenroofs.com Project of the Week 5/07/18 video photo credits: Something Different London; Virgin Limited Edition; Dave Walker’s Derry and Toms Roof Garden Postcard, Trevor Bowen and Miss Diana Wynyard 1940s, and Spanish Garden from the Trevor Bowen Estate from the Trevor Bowen Estate from The Library Time Machine of the Royal Borough of Kensington and Chelsea Local Studies Library; A Spanish garden on a roof in London, A plan of the roof gardens in a 1950s promotional pamphlet, and Queen Mary visiting the roof gardens from the House of Fraser Archive at the University of Glasgow Library; @theroofgardens (Instagram account now closed); Derry’s Kensington, A Garden in the Sky, and Sun Pavilion Derry Gardens from Parks and Gardens UK; Derry & Toms 26.JPG by Edwardx, Own work licensed under CC BY-SA 3.0 via Wikimedia Commons; Kensington_roof_gardens_tent.jpg by flickr user Bryce Edwards CC BY-SA 2.0 via Wikimedia Commons; and Kensington_roof_gardens_window.JPG by Tomhannen at English Wikipedia Public Domain via Wikimedia Commons.

Located on an Art Deco office block, the Roof Gardens (formerly known as Derry and Toms Roof Gardens and the Kensington Roof Gardens) is a 6,000 m2 exotic urban oasis situated six floors and 100 feet above Kensington High Street. Closed as of January 2018, Virgin Limited Edition, the most recent leaseholder, was not able to reach an agreement with the freeholder about renewal of the lease.

Previously occupied and made famous by the Derry & Toms Department Store, The Roof Gardens has been owned by Sir Richard Branson since 1982. Part of Virgin Limited Edition, they hosted a members’ club, a private function venue and the Babylon Restaurant on the seventh floor overlooking the gardens. The Roof Gardens was open to the public during this time.

John Barker and Company took over Derry and Toms in 1920 and they built a new store, constructed in 1929-1931. In 1936, Trevor Bowen, Chairman of Barkers, commissioned Welsh landscape architect Ralph Hancock to design and build the roof garden.

“So Bowen had the idea of a garden on the roof instead of the final floor. There were layers of concrete, screed, asphalt, bricks, clinker, breeze concrete, turf and topsoil, all without the need for any major redesigns of the load bearing capacity of the floors below.

And on top of it the secluded pleasures of a secret garden.” ~ Dave Walker, 2013.

The Derry and Toms Roof Gardens was modeled after Hancock’s famous ‘Garden of the Nations’ of 1933-1935 which was laid out on the eleventh floor of the RCA building at Rockefeller Center in New York City. Over a two-year period Hancock planted more than 500 species of plants and shrubs in the one and a half acre site and the roof gardens opened in May 1938 by the Earl of Athlone. Queen Mary and other members of the British Royal family visited the roof gardens early after opening. At the time, the Derry and Toms Roof Gardens was London and Europe’s largest intensive greenroof.

The three themed gardens include: the Spanish Garden in the north quarter, the English or Tudor Garden in the west, and to the south and east is the English Woodland Garden with over 100 trees and a flowing stream with fish, ducks, and four resident flamingos.

The formal and traditional Tudor Courtyard features Hancock’s trademark herringbone brickwork pathways, impressive Tudor-inspired arches and a wrought-iron hand pump. The Spanish Garden was based on Moorish gardens of the Alhambra in southern Spain, planted with palm trees and with a court of fountains as well as Moorish colonnades and vine-covered walkways. The Woodland Garden boasts a cascade and river, and manicured lawns. Over 30 different species of trees are present in the Woodland Garden, including trees from the original planting plan.

In the late 1960s, the House of Fraser purchased John Barker and Company. From 1973 to 1975 the store and roof garden became Biba’s department store. Although it opened in September 1973, Biba went bankrupt only two years later. The building was subsequently leased to Rama Superstores. In 1978 the Sun Pavilion in the roof garden was extended and converted into a restaurant which covered part of the Woodland Garden. Raised viewing platforms situated in the south and east corners formerly gave access to the staircases to the lower floors. Closed to the public over security concerns, they offered extensive views over the roofscape of the densely built-up urban area of Kensington, Chelsea, and beyond.

In 2003 the Virgin website (link defunct) had stated, “The average depth of the soil is 18-inch drainage made of bricks and clinker over a waterproof membrane. Ralph Hancock brought in some 500 species of plants and shrubs and even imported rock from Pennsylvania for his alpine planting on the assumption that it would withstand London’s polluted atmosphere.” According to Virgin, David Lewis, the head gardener said that despite the wind they were able to grow jasmine and wisteria, and that they had mulched regularly to keep the 18 inch-deep growing media fertile.

More greenroof construction details: The logistics involved in the construction were impressive. Before planting and building could begin, a thick bitumastic base was laid on the bare roof, followed by a layer of loose brick and rubble, arranged in a fan-like pattern to aid drainage. On top of this was a layer of topsoil of between 18 and 36-inch layer of topsoil, into which the planting was made. Water came from Derry & Toms’ own artesian wells 400 feet below (Ralph Hancock f.r.h.s. and Parks & Gardens, UK).

From 2008 to 2009 a team of specialists and consultations with the Conservation Officer, Royal Borough of Kensington and Chelsea, English Heritage, Colwyn Foulkes and Randle Siddeley, the Kensington Roof Gardens underwent restoration and replanting. “The preparation of a garden masterplan, management and maintenance plans, building work proposals and planting schedules enabled the works to be completed within the scheduled time to a high standard of excellence,” (Chapter 40, The Roof Gardens, Kensington, London, Lynne Bridge, 2014).

The Derry & Toms Roof Gardens were completed in 1938 at a cost of 25,000 pounds. After more than 35 years of one of London’s best-known party and wedding venues, the Kensington Roof Gardens closed in early January, 2018:

Future plans for The Roof Gardens remain uncertain. As an English Heritage-designated Grade II Site on the National Heritage List for England, the gardens will not be demolished but who will maintain the site is unknown. London’s most famous and historic roof garden may still yet have a future as a secret garden in the sky.