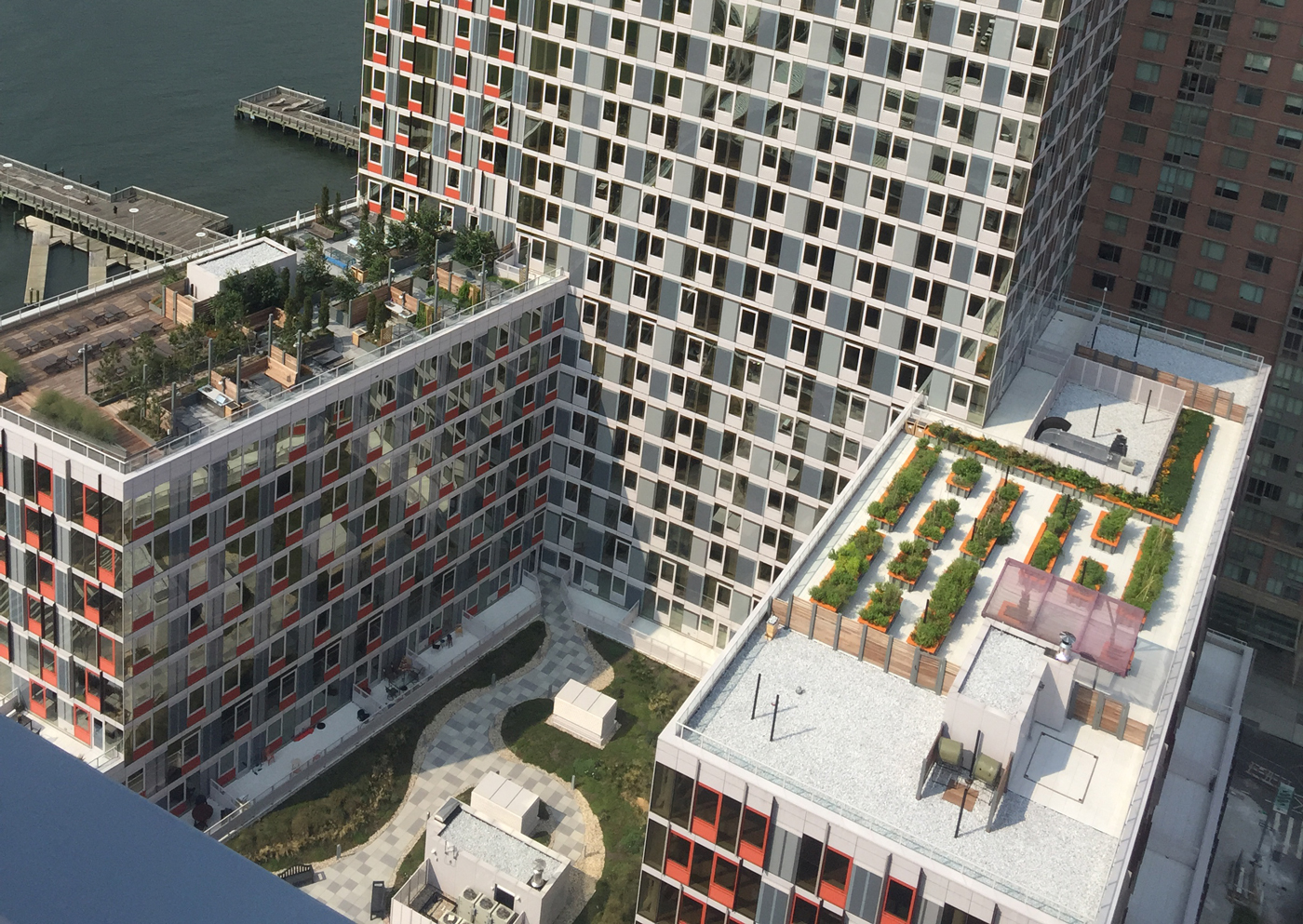 Hunter’s Point South is a mixed-use development for middle and moderate income residents situated on approximately 30 acres of prime waterfront property in Long Island City, the westernmost neighborhood of the New York City borough of Queens. Designated by the City of New York, the first phase of Hunter’s Point South was developed by the joint venture of Related, Phipps and Monadnock; construction began in February 2013. Completed in 2015, the property comprises two buildings, one with 37 stories and 619 units and another with 32 stories and 306 units.

Landscape designers Starr Whitehouse Landscape Architects and Planners carefully considered site-specific conditions at each location to create a diversity of outdoor spaces that accommodate social gatherings, quiet contemplation, and urban agriculture.  Their design resulted in parts of the green roofs which are garden intensive, semi-intensive, as well as extensive.

The character of the development’s four rooftop terraces is determined by their relationship to the building and the city beyond. Cradled in the building’s heart, the central fifth floor terrace is designed to be seen from the tower above it; overlooking the East River, the thirteenth floor amenity terrace makes the most of dramatic views of the East River; in the building’s sunny southeast corner, a community urban farm gives residents the tools and plantings they need to grow their own organic crops; and in nearby Building B, a small terrace on the twenty-ninth floor carves out a quiet retreat high above the city.

The fifth floor terrace serves as a viewing garden from residences above while also providing the environmental benefits of a green roof. This roof garden provides a tranquil space to escape the city and enjoy the view. An adjacent interior courtyard on the fifth floor houses a viewing garden, where residents can enjoy quiet conversation or individual contemplation.

The main amenity terrace at Hunter’s Point South, located on the thirteenth floor, provides a high density of social and recreational spaces accessible to the entire building. The sunny terrace, with stunning views of Manhattan, becomes a resort-style getaway deck replete with barbecue areas, lounge chairs, and abundant greenery that lend the space a sense of the outdoors. A path winds among gray birch trees and dense plantings that juxtaposes the formal and the wild, creating a sense of privacy and natural abundance. This woodland transitions up to the sunning deck surrounded by lounge chairs for socializing or quietly enjoying the view with a good book. Barbecue pits and group seating, subtly screened by plants and architectural elements, allow the terrace to accommodate multiple groups while maximizing a sense of privacy and intimacy.

The east-facing terrace, lacking comparable views but receiving ample sunlight throughout the day, provides the perfect location for an urban farm irrigated by recycled site stormwater. Providing food, social engagement, and opportunities to cultivate the earth, the 2,300 SF urban farm is a community-building amenity that speaks to Hunter’s Point South’s mission to provide affordable housing in perpetuity for the City’s young families and essential service providers. Low-profile planters allow all residents to participate in the success of the farm. The sun-drenched terrace readily supports a plethora of vegetables, perennials, garden plantings, and even a community beehive. The on-site apiary, initially colonized by 3 lbs. of bees, ensures the longevity and success of the farm by providing on-site pollination — and honey!

A quaint terrace on the 29th floor of Building B at Hunter’s Point South completes the series of elevated landscapes. The shallow area has been maximized to become a restful getaway with seating areas and container plantings. Budget-conscious, low-maintenance furnishings create luxurious settings without sacrificing affordability.

Located adjacent to Hunter’s Point South, Hunter’s Point South Park is a former abandoned post-industrial area in Long Island City which was transformed into a $66 million waterfront park in 2013’s Phase I. Offering fun and relaxation for everyone in the area, the new park includes a central green, a waterside promenade, a basketball court, a 13,000 square foot pavilion that contains comfort stations, concessions, and an elevated cafe plaza, opportunities for viewing the skyline and waterfront and much more.  Hunter’s Point South Park Phase II opened in 2018 and was designed by SWA/Balsley and Weiss/Manfredi with Arup as the prime consultant and infrastructure designer.  SWA/Balsley says “the $100 million dollar public-funded project is a triumph of soft infrastructure over hard.”