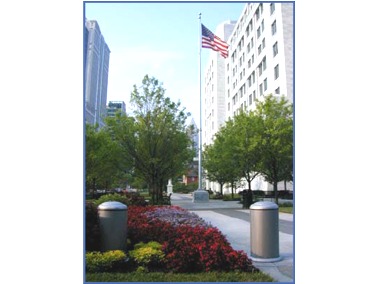 The Federal Reserve Bank of Atlanta is a 10-story office building and a factory where millions of dollars worth of currency and checks are processed every day and is also a conference and education center for economists, bankers and government officials. The Federal Reserve Bank of Atlanta new headquarters were constructed on a 12-acre site that the Bank previously purchased at Peachtree and 10th streets in Midtown Atlanta. “We are very pleased with the way the design for our new headquarters reflects the Bank’s role as a public policy institution and makes a positive contribution to the City of Atlanta and the region,” said Jack Guynn, president and chief executive officer in 1998 (see press release below). “It addresses the complex business needs of a Federal Reserve Bank, while also providing a classic and timeless building that will complement existing and planned development in the dynamic Midtown Atlanta neighborhood.”The architects also designed a site plan that features open, public areas on more than three acres of landscaped green space situated at key areas of the property. The site plan also incorporates pedestrian-friendly streetscapes with extensive lighting, wide sidewalks and tree cover for pedestrian traffic.