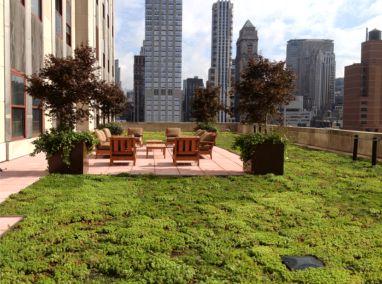 Installed in October, 2011, the Xero Flor System used on the Empire State Building, 21st Floor East and West is XF301 + ¾”XT; the dry weight is 7 pounds per square foot, and the saturated weight is 13 pounds per square foot. The green roofs on the 21st floor feature rooftop patios with outdoor furniture for the enjoyment of office tenants in the adjacent offices.