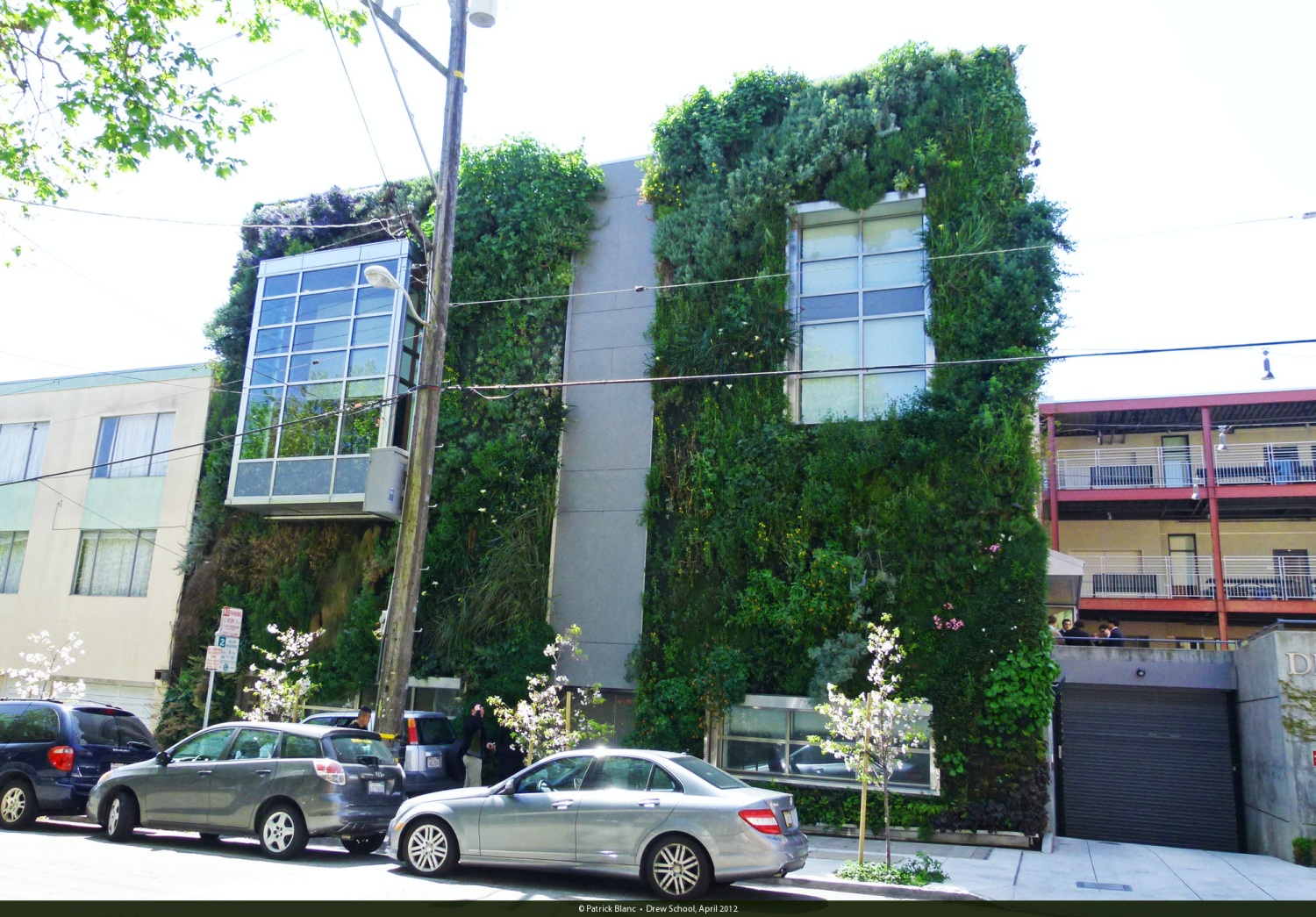 Watch the August 31, 2015 2:34 Drew School Sam Cuddeback III Assembly Wing Vertical Garden – Project of the Week 8/31/15 video from Greenroofs.com on the greenroofsTV channel on YouTube; 4:31  The Drew Dynamic from Drew School on Vimeo.

Founded in 1908 by the respected Bay Area educator John Sheehan Drew, the Drew School has grown from a one student “coaching school” to a fully accredited co-educational college preparatory school enrolling 250 students in grades 9 through 12. Drew School moved to its present location in the Pacific Heights neighborhood of San Francisco in 1911.

“Drew School believes in teenagers —their ideas, their dreams, their opinions, and their potential. That’s why we’ve created a high school community that challenges the traditional definition of success and celebrates achievement one student at a time. The result is that our students develop into fascinating individuals who are sought after by colleges and who know themselves well when they step out into the world.” ~ Drew School.

The plan started in 2007 when school leaders proposed a plan to accommodate student growth: demolish a three-unit 1891 Victorian residential complex on Broderick Street, and build the 14,500-square-foot addition with a three-story assembly and classroom wing to complement its campus at the corner of California and Broderick streets, where Drew has been located for almost a century. The school hoped the new wing would open in fall 2008, yet due to legal challenges, it finally had its soft opening in April, 2011.

Architects Bonnie Fisher and Boris Dramov of San Francisco’s Roma Design Group, designers of the new wing, brought Patrick Blanc in as part of the design team after seeing many of his projects in Paris. The duo considered Blanc “as a natural for a building intended to embody sustainability and green design.

“This being a highly urban site, there’s not a lot of space in which to show those values at work,” Fisher said. “Patrick creates mind-blowing, complex landscapes – we thought, ‘how perfect would that be?’ It can contribute to the neighborhood and also help students develop a deeper understanding of environmental systems,” SFGate, 2009.

Covering the street side wall of the new Sam Cuddeback III Assembly Wing, the 3-story vertical garden is made up of about 4,579 native Californian plants and approximately 64 of the 105 species are from the San Francisco Bay area. The vertical garden and greenroof combined cover about 30% of the building surfaces, or approximately 4,350 sf of plants, which is double the size of the original parcel of land from the 1800’s. The greenwall plants were arranged from sun loving down to shade loving understory species; just a few include flannelbush, Red buckwheat, Douglas iris, Santa Rosa Island sage, blue-eyed grass, silver lupine, mountain pride, scarlet monkeyflower, chaparral or purple nightshade, keckiella, aster, festuca, mimulus, ginger, California fuchsia, Channel Island ubsh snapdragon, bush anemone, and maidenhair fern.

The hydroponic system delivers water supplemented with a low concentration of nutrients to the roots automatically from the top, four to five times a day. Students study the plants on the wall as a living lab for many subjects such as botany, chemistry, and physics; one example was studying native plant uses by American Indians.

Rana Creek installed the 2,630 sf living roof with 1,252 18-inch coconut-fiber biotrays filled with a lava rock gravel growing medium. A subsurface irrigation system waters the roof once a day, seven days a week. In 2012, Dimitri Meierhofer from the Green Roof Competence Center at the University of Applied Science (ZHAW) in Zurich, Switzerland set beetle traps here for a study of beetle populations on living roofs. Another scientist installed artificial habitats for a study of solitary pollinators, such as bumblebees. The living wall and the greenroof attract hummingbirds, butterflies, and more beneficial fauna.

Besides being an extraordinary educational resource for the high school, the Drew School Vertical Garden brings a vibrant lushness to the public environment of San Francisco.