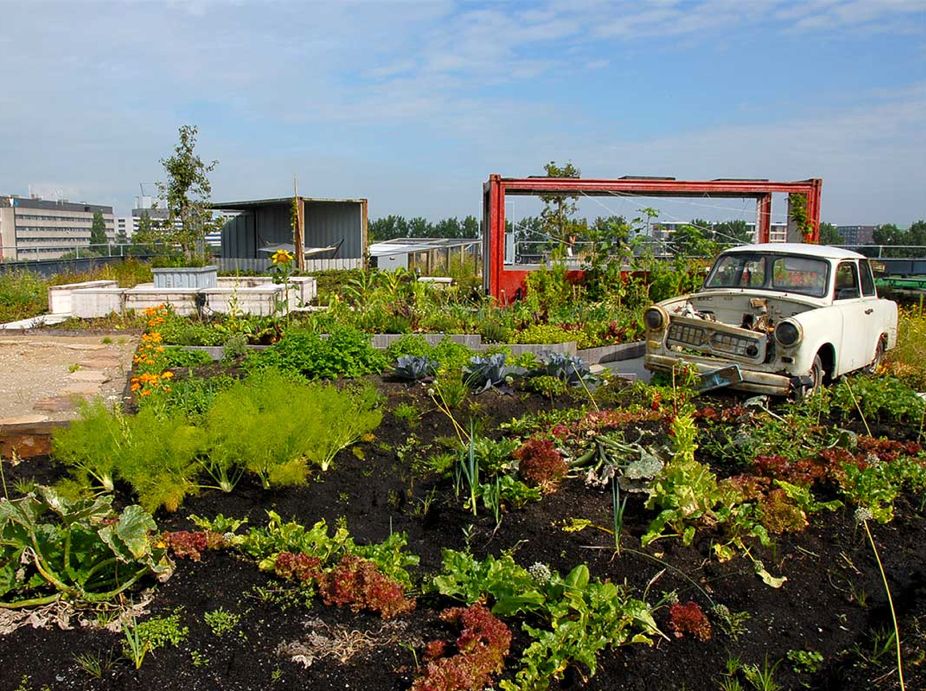 Read the September 15, 2016 B. Amsterdam – Gargantuan creative co-working venue doubles up as one of Amsterdam’s hidden hangouts… by Lisa Davidson in We Heart and the September 7, 2016 B. Bylon: A Rooftop Oasis by Bryanne Robinson in Pop-Up City.

“With its 40.000 square meters and two buildings, B. Amsterdam is the biggest startup ecosystem in Europe. B. is a creative working space for innovation, education, and growth. We build a bridge between startups, creatives, and corporates and bring them together, setting up ways to connect with-, learn from- and grow with each other,” ~ B. Amsterdam.

De Dakdokters (The Rooftop Doctors) were asked to design a rooftop garden together with GrownDownTown for startup company B. at the Johan Huizingalaan in Amsterdam West. The goal was to create an elevated park on the 5th floor of the former IBM Headquarters building, a place accessible to all office workers for relaxation, breaks, and meetings. The park had to be a place to relax, with loads of green; construction at B. started in the summer of 2014. Later in 2016, this roof park expanded with Bureau, a hip restaurant and bar, and is now accessible to everyone.

Between the two companies the greenroof was planted entirely with self-sustaining crops within 90 cubic meters of growing media. The result is an edible rooftop park equipped with freshly grown produce, a restaurant, water feature, two pétanque courts, chickens, compost full of worms, a rainwater storage system, plenty of seating, and even two decorative Trabant cars nestled on the roof to be enjoyed by resident employees, Amsterdam residents, and city visitors.

A closed loop system processes weeds and green waste on the rooftop from the restaurant and catering on the property into compost bins (worm hotel). The chickens are sometimes fed green waste and lay fresh eggs to Bureau. And, mixing hen manure from the chicken coops provides nutrients to the gardens.

In 2016 a water storage system was added to the B. Bylon @ B. Amsterdam roof park. 220 m2 crates harvest rainwater from below the roof floor, which is used for irrigation.

As an underlayment the designers used a Polder Roof® system; this retains rainwater, which is used to water the plants on top of it. On top were planted several kinds of plants, such as vegetables and herbs that are used in the restaurant next to the garden.

“At the edge of the pond, you will find a small mint meadow with eight different flavors of mint. You can also find a Mediterranean herb garden as well as a variety of vegetables, such as lettuce, bok choy, and leeks. The roof also bears pear trees, grapevines and ten kinds of berry bushes. In spring 2016 we added 50 square meters of Rooffood on the roof,” ~ GrownDownTown.

Rooffood is a growing system that enables vegetables to grow on rooftops using a changeable crate system. Crops access stored water in the underlayment when needed though a wicking process. GrownDownTown says their vegetable crops and herbs are cultivated by De Lindenhoff, a local organic grower. The crops grow in special crates and fully mature in the Rooffood system. Crops are rotated every season, and they take back the harvested crates and recycle them.

“This edible park is the first of its kind. On this rooftop you’ll not only find green, but also a water feature, two pétanque courts, a large vegetable garden, fruit trees, and chicken coops [where six chickens lay fresh eggs every day]. There is outdoor seating and covered seating areas with hammocks for meetings; you will even find two decorative Trabant cars on this roof.

B. Bylon @ B. Amsterdam is a beautiful rooftop park overlooking the city, and the industrial yet funky Bureau has received many fine reviews serving good food and wine for a fair price and has been added to the list of Amsterdam’s rooftop hotspots. Most products come straight from the rooftop park and are homemade, from some greens to mayonnaise to cheesecake. Bureau’s chef Niels Veenvliet changes the menu every two months so patrons can enjoy the ever-changing fresh menu from the edible roofscape year-round.