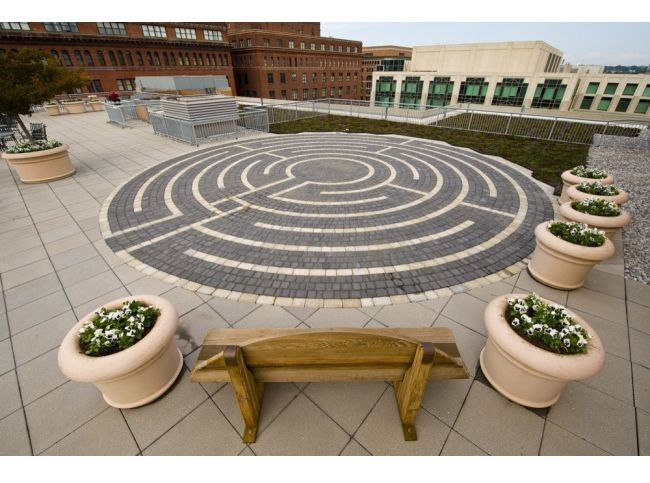 The American Psychological Association is located at 10 G Street, N.E., Washington D.C.; visit their website. The greenroof and labyrinth is open to the public Monday through Friday from 7:00 a.m. to 7:00 p.m. You can get access by asking the guard at the front desk or call Holly Siprelle of WRI (202-336-5519) to arrange a guided walk.

The American Psychological Association is the largest scientific and professional organization representing psychology in the United States. APA is the world’s largest association of psychologists, with nearly 130,000 researchers, educators, clinicians, consultants and students as its members. Their mission is to advance the creation, communication and application of psychological knowledge to benefit society and improve people’s lives.

The APA’s first greenroof was constructed here in September, 2008 by DC Greenworks on top of the LEED Gold certified eight-story office building at their commercial rental property at 10 G Street, N.E., Ward 6, in Washington, DC. The second greenroof was installed at the American Psychological Association (APA) Headquarters at 750 First Street, NE. in 2014 – see the Project Profile in The Greenroof & Greenwall Projects Database.

APA was approached for the venture by The Chesapeake Bay Foundation, which seeks to help Washington, D.C., cope with water runoff problems created by the city’s antiquated sewer system. The World Resources Institute occupies the top two stories of the 8-story building and was also a project funder.

The APA greenroof and a meditation labyrinth is designed to give employees and visitors a place for quiet reflection and help prevent pollution in local waterways. The 7-circle, approximately 42-foot diameter labyrinth design is known as the Santa Rosa Labyrinth, and was conceived by Lea Goode-Harris, PhD, the fruition of her doctoral dissertation. The greenroof has benches for reflection and provides a journal in which visitors can record and share their thoughts. A trellis was added to create another element of greenery and cooling to the beauty of this unusual installation.

“This collaborative effort is part of our overall mission to create open spaces that heal the body, mind, and spirit,” said Mary Wyatt, executive director of TKF Foundation, the lead funder for the project. “We are gratified to be a leader in providing this innovative green space to all those who wish to have a place for reflection during the course of a work day.” The $170,000 project received additional funding from the APA, the Chesapeake Bay Foundation (CBF), and the World Resources Institute (WRI),” (APA, 2008).

The standard modular GreenGrid(R) system was used on the American Psychological Association greenroof. The lightweight planting modules measure 2ft by 4ft by 4in. Each module arrived on site with mature plants and ready to be installed. The modules were grown in a nursery for 30-60 days and transported in nursery racks then carried on a freight elevator to the roof. Approximately 45,000 gallons of water will be retained on this roof during a typical year of average rainfalls.