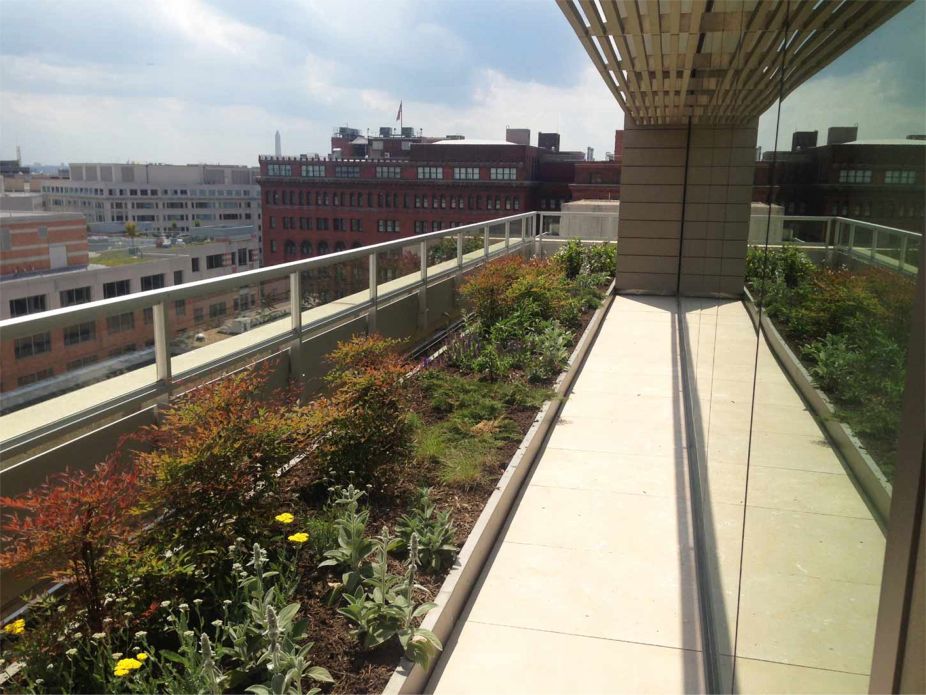 The American Psychological Association Headquarters is located at 750 First Street. NE, Washington, DC 20002; visit their website. See the Project Profile from Capitol Greenroofs along with many construction photos from their Project Gallery.

Read the June 18, 2018 Greenroofs.com Project of the Week for June 18, 2018: American Psychological Association (APA) Headquarters by Linda S. Velazquez; March 9, 2015 Rooftop Retreat for a D.C. Not-for-Profit by Abram Goodrich from Gensler; and the February 2012 Going green – APA is fostering environmental sustainability on several fronts by Tori DeAngelis in the APA Monitor on Psychology. Learn about the District of Columbia’s Green Roof Rebate Program, DDOE, and the Anacostia Watershed Society. Additional information about the District Department of the Environment’s (DDOE’s) Green Roof Rebate Program is available at the DDOE Green Roof Website.

Learn about Bison Innovative Products in The Greenroof & Greenwall Directory.

The American Psychological Association (APA) is the largest scientific and professional organization representing psychology in the United States. APA is the world’s largest association of psychologists, with more than 115,700 researchers, educators, clinicians, consultants and students as its members. Their mission is to advance the creation, communication and application of psychological knowledge to benefit society and improve people’s lives.

In an effort to reduce energy consumption, maximize recycling and contribute to a healthier environment, in April 2014 a second greenroof was added to APA properties at their headquarters at 750 First Street. NE, Washington, DC., which qualified for the DDOE grant program (see below). The first greenroof was constructed in 2008 at their commercial rental property at 10 G Street, N.E. – see the Project Profile in The Greenroof & Greenwall Projects Database.

Since a roof renovation was in order for the APA HQ in early 2014, an intensive greenroof was deemed appropriate. Rebate funding was provided by the District Department of the Environment through a program administered by the Anacostia Watershed Society; many private companies were also involved which made this project successful.

The design at the American Psychological Association Headquarters building was focused on how greenroofs benefit people’s mental well being.

“Gensler, in close collaboration with landscape architects Oehme van Sweden, helped APA transform the tower and the surrounding rooftop into an urban retreat, an unexpected emerald in the building’s crown. Meeting and pre-meeting spaces, designed to leverage abundant daylight, flow easily into lushly planted outdoor gathering spaces. These outdoor rooms are used for breaks between meetings, as lunch spots for all building tenants, for special events like twilight receptions, and for just getting a quiet minute in a restful garden.” ~ Gensler, 2015

Installed by Capitol Greenroofs, the system design called for plenty of seating and relaxation with decking tiles, metal planters, and perennial planting areas. A linear planter was installed along the walkway. The strip of plants forms a clear edge along the parapet wall. This area was primarily planted with a variety of herbaceous perennials and some small woody shrubs. In another area custom aluminum planters were installed with built-in IPE benches. The wood decking tiles contrast the stone pavers and are elevated slightly to create a nicer viewing platform. A steel trellis with ceramic slats on top provide ample shade in this area.

The roof garden is composed of a mixture of perennials, woody shrubs and small magnolia trees. Some junipers and yews were also selected to add to the massing and help define the space adjacent to the handicap ramp.

Site furnishings are important for creating a usable and comfortable space. The custom aluminum edge restraints hold back growing media up to the 24 inch soil depth.