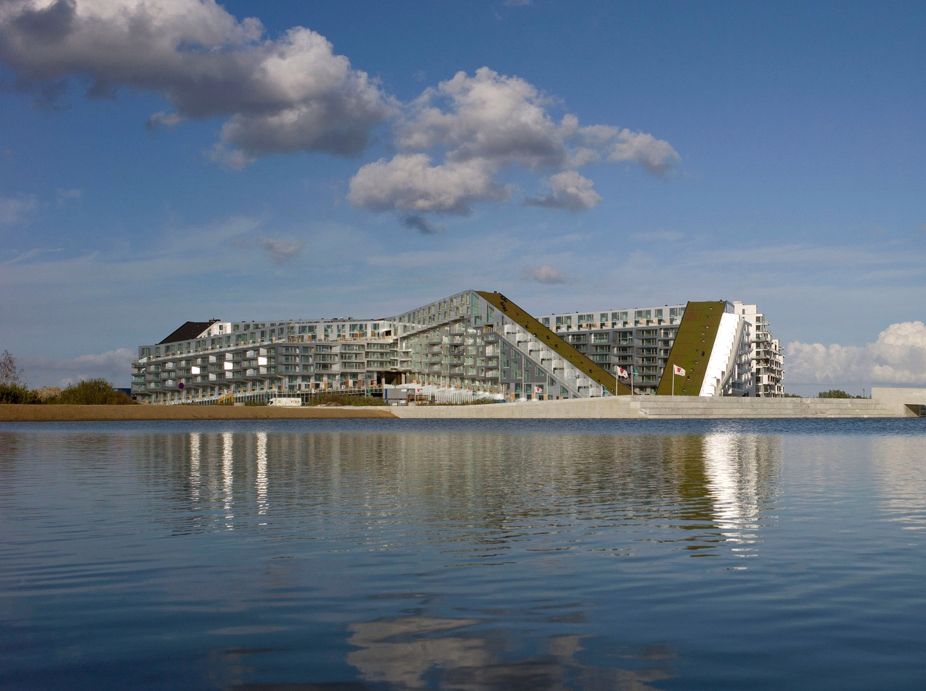 8 House is located at 61, Richard Mortensens Vej, København S, Kastrup, Denmark. Watch the 2:50 8 House, Copenahgen, Denmark – Project of the Week 4/25/16 video from Greenroofs.com on the greenroofsTV channel on YouTube. Greenroofs.com Project of the Week video photo credits: All courtesy of Bjarke Ingels Group (BIG), © by: Jens Lindhe, Ty Stange, Dragor Luft, and Ulrik Reeh, except for 8House 2_Vestamager_Copenhagen By Rob Deutscher from Melbourne, Australia, CC BY 2.0 on Wikipedia/.

Learn about ZinCo in the Greenroof & Greenwall Directory.

8 House (Tallet in Danish) is a 61,000 m2 bowtie-shaped mixed-use building of three different types of residential housing and 10,000 m2 of retail and offices which comprise Denmark’s largest private development ever undertaken. Commissioned by St. Frederikslund and Per Hopfner in 2006, the 8 House sits on the outer edge of the city as the southernmost outpost of Ørestad. Rather than a traditional block, the 8 House stacks all ingredients of a lively urban neighborhood into horizontal layers of typologies connected by a continuous promenade and cycling path up to the 10th floor creating a three-dimensional urban neighborhood where suburban life merges with the energy of a big city, where business and housing co-exist.

With spectacular views towards the Copenhagen Canal and over Kalvebod Fælled’s protected, open spaces, 8 House not only offers residences to people in all of life’s stages as well as office spaces to the city’s business and trade – it also serves as a house that allows people to bike all the way from the ground floor to the top, moving alongside townhouses with gardens winding through an urban perimeter block.

8 House was designed by Bjarke Ingels Group (BIG) who was partly inspired by classic townhouses as well as the open, democratic nature of functionalistic architecture. The architects designed a long, coherent house with immense differences in height, creating a strong inflow of light and a unique local community with small gardens and pathways that channel your thoughts into mountains in Southern Europe and memories of a childhood home.

The building’s housing program offers three kinds of accommodation: apartments of varied sizes, penthouses and townhouses. With a mix of suburban tranquillity and urban energy, the townhouse and its open housing is ideal for the modern family, while singles and couples may find the apartments more attractive. And for those who live life to the fullest, the penthouses function as a playground with fantastic views over the canal and Southern Copenhagen. The different housing typologies are united by the exterior dimensions which provide inspiration for adventures, inspiring communities.

‘This is our take on creative, experimental architecture, which surprises and calls for a life based on a sense of community. We have actually elevated the shared facilities around the height axis, so that gardens, trees and the system of paths follow the body of the structure all the way to the roof. On the rooftop, eleven stories up, these shared spaces culminate in a combined ‘mountain path’ and rooftop garden. From here, you can enjoy the view of Kalvebod Fælled’s nature resort’, says Bjarke Ingels, founder of BIG.

The bow-shaped building creates two distinct spaces, separated by the centre of the bow which hosts the communal facilities of 500 m2. At the very same spot, the building is penetrated by a 9 meter wide passage that connects the two surrounding city spaces: the park area to the west and the channel area to the east. Instead of dividing the different functions of the building – for both habitation and trades – into separate blocks, the various functions have been spread out horizontally.

The apartments are placed at the top while the commercial programme unfolds at the base of the building. As a result, the different horizontal layers have achieved a quality of their own: the apartments benefit from the view, sunlight and fresh air, while the office leases merge with life on the street. This is basically emphasized by the shape of 8 House which is literally ‘hoisted up’ in the North East corner and ‘squeezed down’ at the South West corner, allowing light and air to enter the court yard in the middle.

Two sloping green roofs totaling 1,700 m2 are strategically placed to reduce the urban heat island effect as well as provide the visual identity to the project and tying it back to the adjacent farmlands towards the south. Using pre-vegetated mats from Veg Tech AS, the build-up is about 4 cm, which includes an installed irrigation system on the sloped green roofs. One hundred individual semi-intensive 1-square meter gardens with planters from ZinCo were planted on the terraces, installed by MALMOS. Situated in front of the apartments along the path all the way around the building, these planter gardens also have a slope, so the sight of the vegetation can be seen from the windows inside. Residents are allowed to change the type of plants in their own gardens as long as they keep it green.

Originally, the entire roof of 8 House was designed as a continuous greenroof with extensive vegetation on the 32-degree sloped areas and recreational intensive roof gardens planned atop the flat areas. Yet, because of the economic climate and budgetary restrictions, only the lower portions were greened. The shape of the building allows for daylighting and natural ventilation for all units. In addition, rainwater is collected and repurposed through a stormwater management system.

8 House is where you will find the attention to detail embedded in a larger context. Here, closeness thrives in the 60,000 m2 building. This is where the tranquility of suburban life goes hand in hand with the energy of a big city, where business and housing co-exist. 8 House is where common areas and facilities merge with personal life, and where you can reach for the stars at the top of the building’s green areas.

8 House has received numerous awards including the 2012 American Institute of Architects Honor Award for Architecture; Housing Building of the Year at the 2011 World Architecture Festival; the 2010 Scandinavian Green Roof Association Green Roof Award, as well as being included in the Huffington Post’s “10 Best Architecture Moments of 2001-2010.”