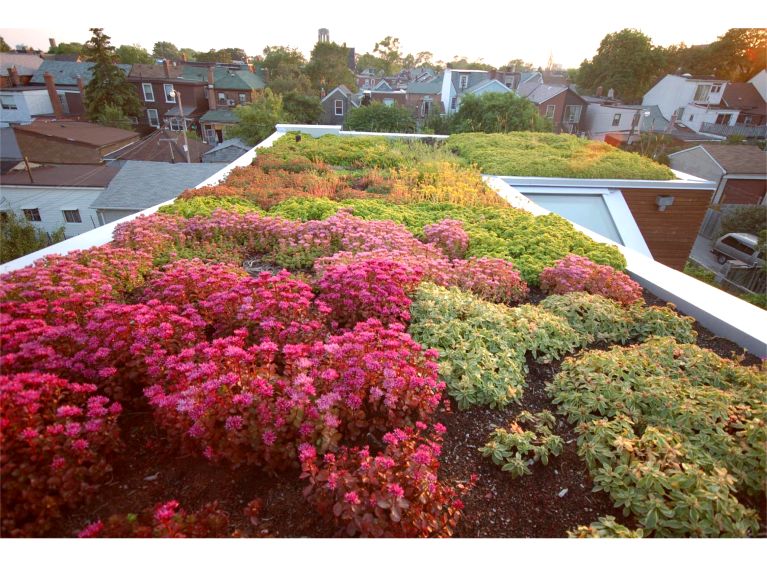 Envisioned to maintain a small footprint on the lot, 328 Euclid is a residential house designed by two architects (Janna Levitt & Dean Goodman from LGA Architectural Partners) who are also the residents of the house. Flexibly designed for the family’s changing needs, the 1,600 sf three-story home serves as a prototype for compact, ecologically smart design.

Due to this detail, we could plant right up to the parapet wall not needing any gravel separation barrier between the green roof and the parapet; the total effect would then be a roof that was completely green from parapet to parapet. This was especially important on the second floor roof because the client/architect had designed their bedroom to open onto the green roof, giving them a sense of living in a garden.

328 Euclid received the 2007 Ontario Association of Architects Award of Excellence.

The roof is composed of three different sections: the lower roof which is in total shade is comprised of Equisetum (Horse Tail Grass) and Sedum ‘Autumn Joy’; the second floor roof has plants that do well in either full sun or half sun / half shade and include Switch Grass (‘Heavy Metal), Carex (Black), Coreopsis, Lavender, Bergenia cordifolia, and Hosta sieboldiana; and the top roof is composed of all Sedums (S. album, S. acre, S. kamschaticum, S. matrona, S. spurium and S. ‘Autumn Joy’).

The top roof is watered through drip irrigation three times a week, the second floor is watered by hand once a week and the lower roof is watered occasionally, but because it is in the shade is does not have a consistent need for watering.

There have been many benefits for the house; they do not use air conditioning and if watered consistently the owners find that the roof is cooling at night, as there is no build up of heat from the day, which is generally common on east west facing city houses. 328 Euclid handles all stormwater on site.

“The first residence in Toronto to incorporate green roofs, Euclid has been studied by the City for its sustainable strategies. Planted at every level, the roof gardens effectively bring the footprint of the house to zero. In every season the gardens make a positive contribution to the temperature and air quality of the house. Sited at window level, the second floor garden creates the impression that the bedroom is floating in a field. Native plant species spark a complete sensory experience, invading the house with the immediate sights of the seasons, plants, birds and animals, the rustling of wind through the grasses and the smell of herbs,” (ArchDaily, 2009).