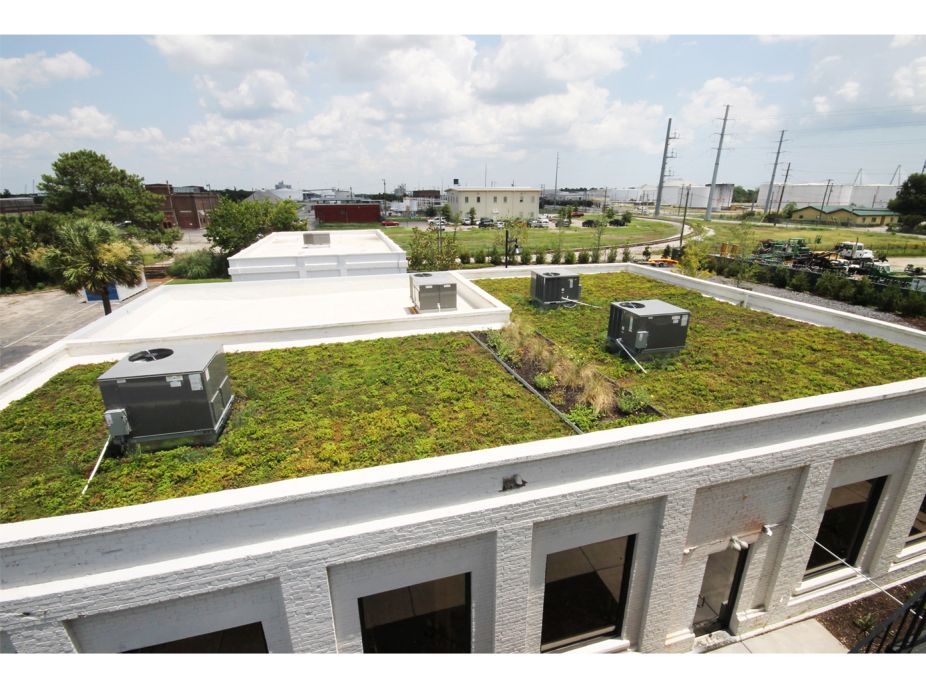 Learn about the project from the developer, Flyway Development. Read the August 3, 2014 Development firm plans office building, amphitheater on Charleston’s upper peninsula by Warren L. Wise in The Post and Courier; the July 17, 2014 Lowcountry Local First launches co-working space at 1600 Meeting by Ashley Sprouse in Charleston City Paper; the July 15, 2014 Lowcountry Local First Opens Coworking Space in Charleston by Blake Campbell in Silicon Harbor Magazine; the June 21, 2014 Building transitions from fossil fuel to creative energy by Robert Behre in The Post and Courier; and the April 14, 2013 1600 Meeting Street: Can a creative cluster help transform the local economy? by Adam Parker in The Post and Courier.

Learn about the following companies in The Greenroof & Greenwall Directory: Moerings USA / Sempergreen.

Located just four miles north of downtown in Charleston’s Upper Peninsula, a long blighted area of post-industrial brownfields known as “The Neck” is now a booming site of revitalization and a mecca for creative businesses. One shining example of this rebirth is the 1600 Meeting Street Development by Flyway Development with a newly renovated set of three buildings rehabilitated by The Middleton Group Architecture. All called 1600 Meeting Street, they are actually located at 1630 Meeting Street after an address error was discovered. The two smaller out buildings measure 950 square feet and 3,000 square feet, and the larger three-story, stately columned historic brick building with wrap-around porches contains 11,200 square feet. Installed in June, 2014, the green roof sits atop the first of the two out buildings at 1630 Meeting Street.

The redevelopment of this brownfield site, formerly owned and occupied by Exxon Oil (Esso) since 1926, started with the renovation of the three existing buildings. The 89-year-old buildings offer up approximately 20,000 square feet of floor space, and had laid vacant for over two decades. Flyway’s goal for the property was to create a hub for creative people to come together, connect, and work. They also aspired to renovate the buildings sustainably by using reclaimed materials, eco-efficient lighting, and a green roof which sits above the shared offices of Lowcountry Local First and Local Works.

Formerly used a garage by its previous owner, 1630-2 Meeting Street is now the home of Lowcountry Local First, a non-profit advocate and promoter of local small businesses and farmers. Local Works is an initiative of Lowcountry Local First and was created using its buy-local approach by sourcing local craftsmen and materials to develop the facility. They are working to create jobs and grow the Lowcountry economy by empowering local makers, growers and service providers.

The building has many sustainable features inside, including locally crafted wood furnishings made from locally reclaimed lumber and other reclaimed materials. Outside, the building features a 2,300-square foot green roof. “When viewed from the upper piazzas of the main building, the roof makes an interesting juxtaposition with the oil tanks in the distance,” (The Post and Courier, 2014).

Pre-grown modules planted with Sedums, Delosperma, Prickly Pear, and Allium were used around the HV/AC units. A small intensive section of the green roof features native coastal perennials and grasses. The green roof can easily be observed from the third floor balcony of the adjacent building and is often the highlight of building tours. In the future, the second out building housing an interior decorating shop may have a green roof, as well as the main three-story structure.

“Local Works fills a much-needed niche in Charlestonï¿½s burgeoning entrepreneurial ecosystem. More and more entrepreneurs are breaking free from their home offices and coffee shops to seek professional, collaborative, yet still affordable environments that foster interaction with other professionals…’We are putting entrepreneurs together and giving them a space to thrive and collaborate,’ says Local Works Marketing and Communications Director, Misty Lister,” (Silicon Harbor Magazine, 2014).

The 1600 Meeting Street property houses a total of 19 creative businesses, entrepreneurs and nonprofits in a collaborative workspace community in spaces ranging from 250 to 3,500 square feet; the organization is a resource for the community members they serve. Local Works is run as a non-profit center with public and private supporters including the City of Charleston, Community Loan Fund and a 2014 award by the SC Department of Commerce’s Innovation Fund. 1600 Meeting Street is part of the master plan for “The Refinery” by Flyway Development.