Metro Atlanta is in the grip of a major heat wave, throwing into stark relief the fact that some city neighborhoods are disproportionately hotter than others. This phenomenon is known as the Heat Island Effect.

Why do heat islands exist? Because our expansive city has a wide variety of land uses and surfaces. For example: Atlanta’s lush tree canopy helps to keep many of its single-family residential areas cooler. But in contrast, areas in a “concrete jungle” with buildings, asphalt and concrete absorb and re-emit heat, keeping these areas warm both during the day and at night.

Areas in a “concrete jungle” with buildings and asphalt absorb and re-emit heat, keeping these areas warmer throughout the day and night. 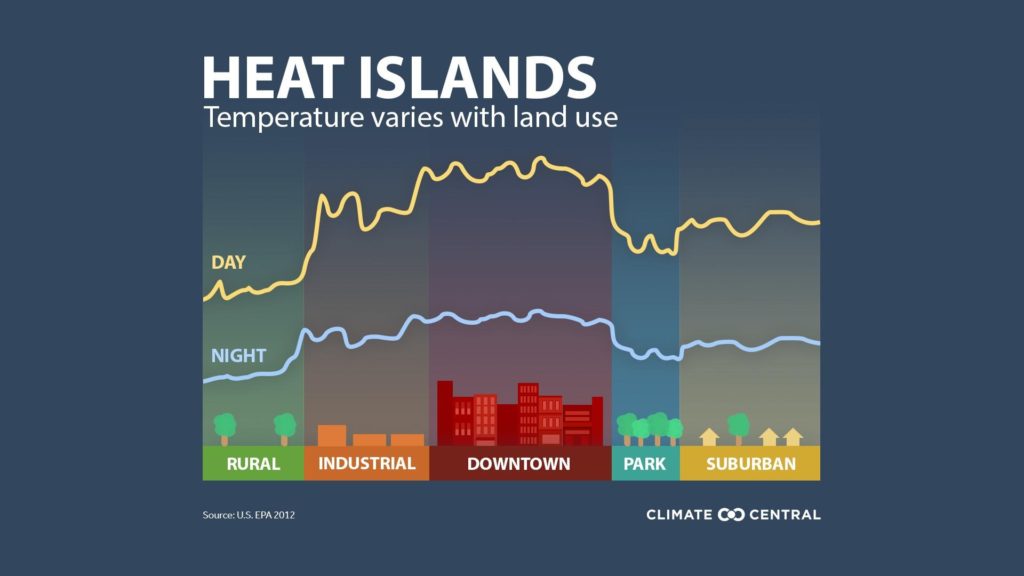 Urban heat islands are metropolitan areas that are hotter than their outlying regions, with the impacts felt most during summer months. Credit Image to Climate Central.

Last September, Spelman College and other local institutions paired together to put a number on these heat extremes. See the full study here, conducted last year by Spelman University and CAPA Strategies.

While “green roofs” are a recent trend among developers in the city’s newest skyscrapers, planting trees and adding small parks to those hottest parts of the city can be some of the most cost-effective and easily obtainable ways to provide some relief to Atlantans most in need.
Dr. Guanyu Huang,
Assistant Professor of Environmental and Health Sciences
Spelman College

Researchers had 60 volunteers ride their bikes or drive their cars around the city three times on the day of the study. They found that the hottest parts of the city were an average of 14.5 degrees hotter than the coolest. “The central part of the Atlanta downtown… those large communities are actually hotter than where the trees, the vegetation are,” said Dr. Guanyu Huang, who helped administer the study. “So we do see a pretty big and strong temperature hotspot over the downtown area.”

The volunteers recorded more than 48,000 temperature measurements, showing which neighborhoods face the greatest threat from extreme heat. Neighborhoods primarily in or south of downtown saw the hottest temperatures. Many of those areas are historically Black neighborhoods. According to Dr. Huang, historically underserved communities are the greatest impacted by more extreme heat. “People of color and, you know, communities of color… are actually suffering more heat than…surrounding areas,” he said. The City of Atlanta stepped up to become a partner in the study. Dr. Huang said the city is aiming to use the data to highlight which neighborhoods need improvements to curb the impacts of the extreme heat.

While “green roofs” are a recent trend among developers in the city’s newest skyscrapers, planting trees and adding small parks to those hottest parts of the city can be some of the most cost-effective and easily obtainable ways to provide some relief to Atlantans most in need. “Trees and the vegetation are actually super helpful for cooling down the area,” Dr. Huang said. “So based on our study, we just noticed that over the parks, even like a very small park, a block sized park, actually helped a lot to reduce the temperature or kind of like, change the microclimate in a neighborhood.”

The next goal, Dr. Huang said, is working on a proposal to further investigate temperature distributions and bring in community engagement, to increase awareness of climate change and environmental justice issues. “This project that we’ve been working on, definitely, the goal is always to make Atlanta a better place for everybody,” he said.

Read more: Atlanta's 'heat island' | A look at which parts of the city are the hottest and why