This third of three articles about sod roofs (also known as green or living roofs) as a unique architectural feature at Sea Ranch, a planned community on the northern California Sonoma Coast, focuses on the threat of wildfires, insurance implications, as well as available resources.

The threat of wildfires weighs upon all of us living in California. The recent fires in Sonoma County along the coast along Highway 1, Meyers Grade Road, and the area around Lake Sonoma got awfully close to home, making us all more aware of what we need to do to protect our homes.

“With Northern California – well, actually all of California – burning up, we’ve really had to challenge ourselves to find alternatives to our traditions,” said Lisa Dundee, Director of The Sea Ranch Association’s Department of Design, Compliance, and Environmental Management, in a June 11, 2019 New York Times article entitled “Sea Ranch, California’s Modernist Utopia, Gets an Update.”

In the same article, architect Mary Griffin added, “We can’t build the way we did even 20 years ago.” Dundee and Griffin may have been speaking about alternate building materials and methodologies, but do their comments also include living roofs?

Living roofs have been part of Sea Ranch’s architectural history from the beginning. Is it now time for the value of a living roof to exceed its aesthetic value and begin to take its place as a desirable option for building for fire safety?

Living Roofs and the Risk of Wildfires 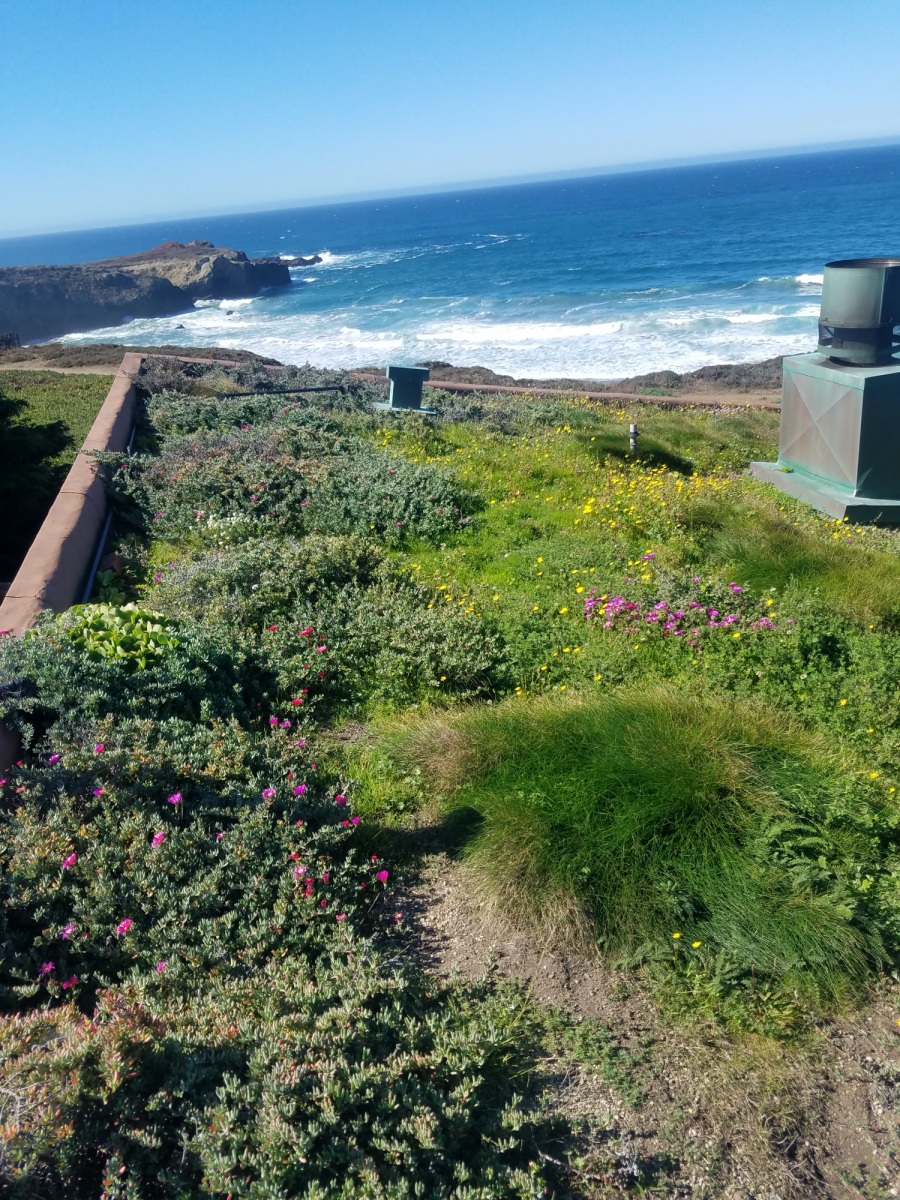 How does a dwelling with a living roof fare in a wildfire? Although there is not much published about this issue, there is evidence that they may be a desirable alternative to standards roofs, as soil and other inorganic growing media additives (such as expanded clay and slate, etc.) do not burn.

In fact, a properly designed and well maintained living roof retains water. When wildfires spread through flying embers to a dwelling, the roof is generally the first to catch fire. If the fire can be deterred at that point, then the structure may survive. Roofs must meet a fire classification rating of one hour-called “Class A.” Living roof systems must meet the same fire requirements as standard roofing materials, but is there an opportunity to exceed this requirement with a living roof?

At the onset, a living roof should be designed by an architect, landscape architect, or related professional such as a GRP (Green Roof Professional) who understands the complexity of a properly designed greenroof system.

Importantly, fire protection should be incorporated into a green roof system. The ANSI/SPRI VF-1 2017 External  Fire Design Standard for Vegetative Roofs, developed by industry organizations ANSI/SPRI along with the green roof industry association Green Roofs for Healthy Cities, include the following standards, among others: 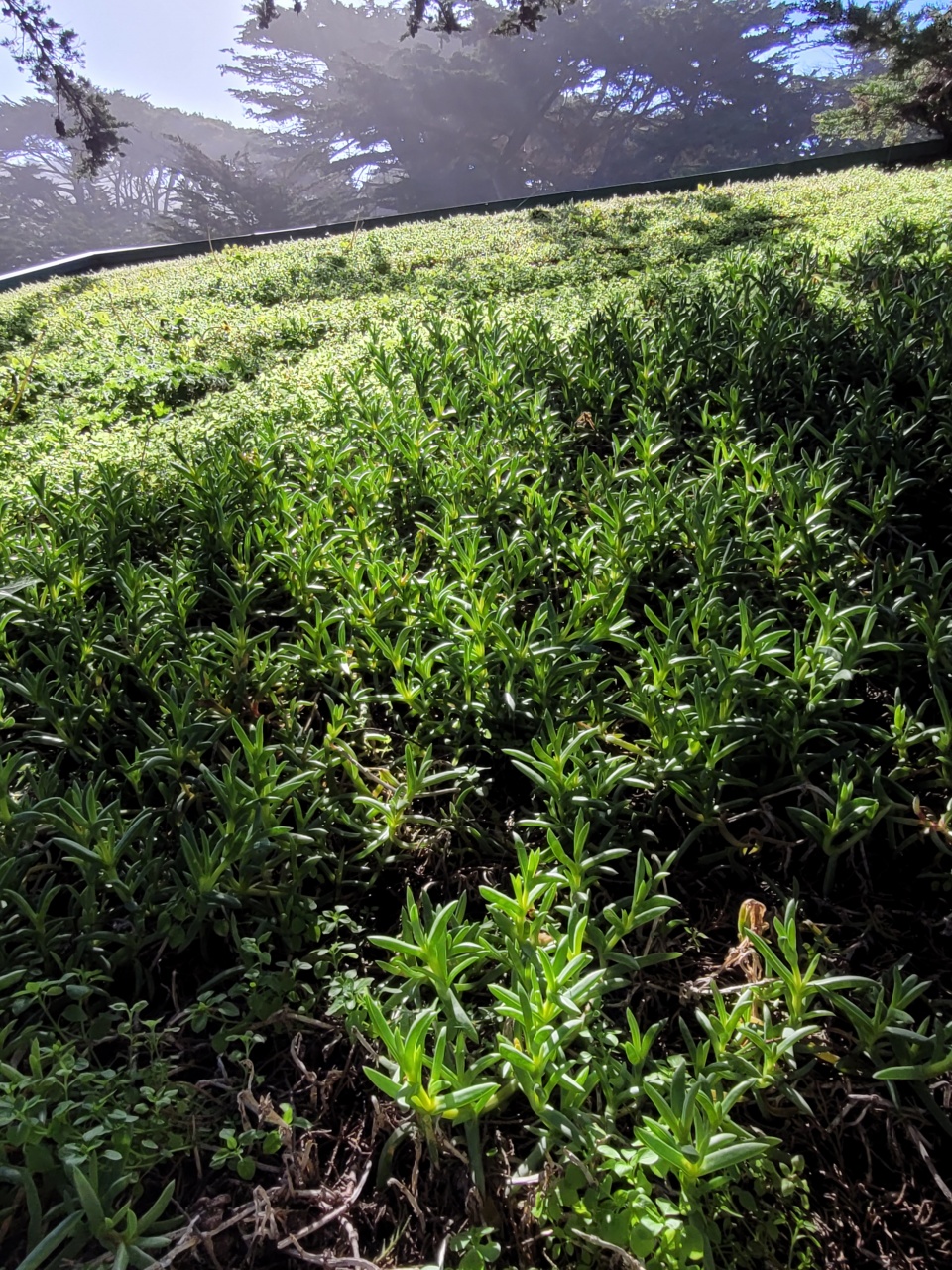 Succulents taking over a living roof, providing the best protection against burning embers in a wildfire. Image: Deloras Jones

Captain Miller explains the importance of managing dormant and dry grasses on the roof as you would other defensible space around your house: cut them down.  Otherwise, living roofs may create a fire hazard during drought conditions if not properly managed. 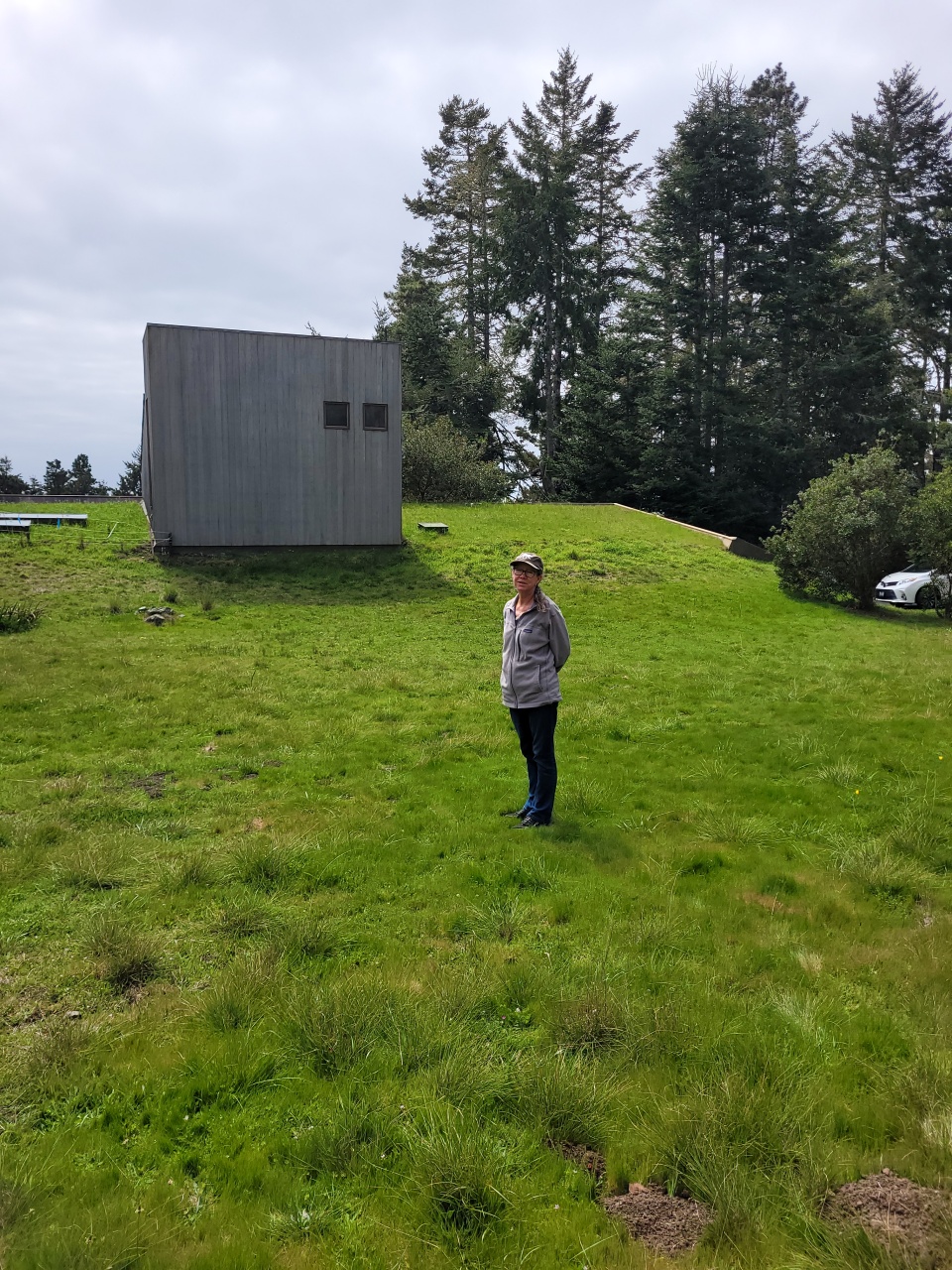 This sod roofs grows out of the meadow, making it easy to maintain dormant grass as one does defensible space around a home. Also, it provides easy access for grazing deer. The sod roof covers the entire house which is built into the side of a small hill. Image: Deloras Jones

A homeowner may wonder whether their insurance will cover living roofs. Our local Gualala, California insurance agent Andrea Phillips reports that Farmers Insurance Group and as well as other companies do provide coverage for living roofs.  But Phillips cautions that eligibility for a homeowner’s coverage is determined by several factors, which makes the process of insuring a home more complex.

The most important factor in determining fire coverage rates is the dwelling’s Fire Risk Score, which is based on several components, including:

In addition to this key score, other factors also determine whether property insurance is available, such as whether the house is used as a vacation rental. For example, an insurance company may cover a living roof, but may or may not cover a home with a living roof that is also used as a short-term rental. Clearly, the insurance issue is not a “one size fits all” approach.

Phillips explains that there are not a lot of insurance industry guidelines available to assist agents. This, she believes, is based on the lack of knowledge and experience in underwriting single family houses with living roofs that have been exposed to wildfires. As this type of architecture becomes more prevalent and the insurance industry gains more experience with living roofs and wildfires, changes in guidelines may evolve. 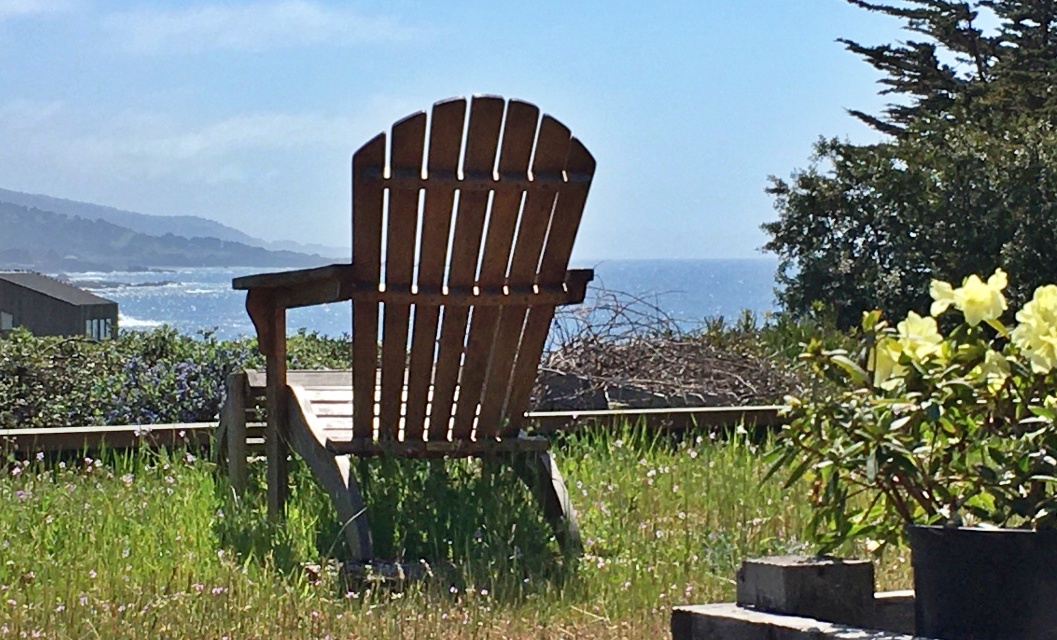 Janet MacKinnon, GRP, architect and owner of “Hedgegate,” built her Sea Ranch home in 2016, designing it as a sustainable home centered on capturing storm runoff and rainwater for irrigation. Her home goes beyond just a living roof; it has extended to “living architecture.” MacKinnon has a multi-level living roof, which even grows herbs outside the kitchen door, and a luscious living wall that complements her roof. 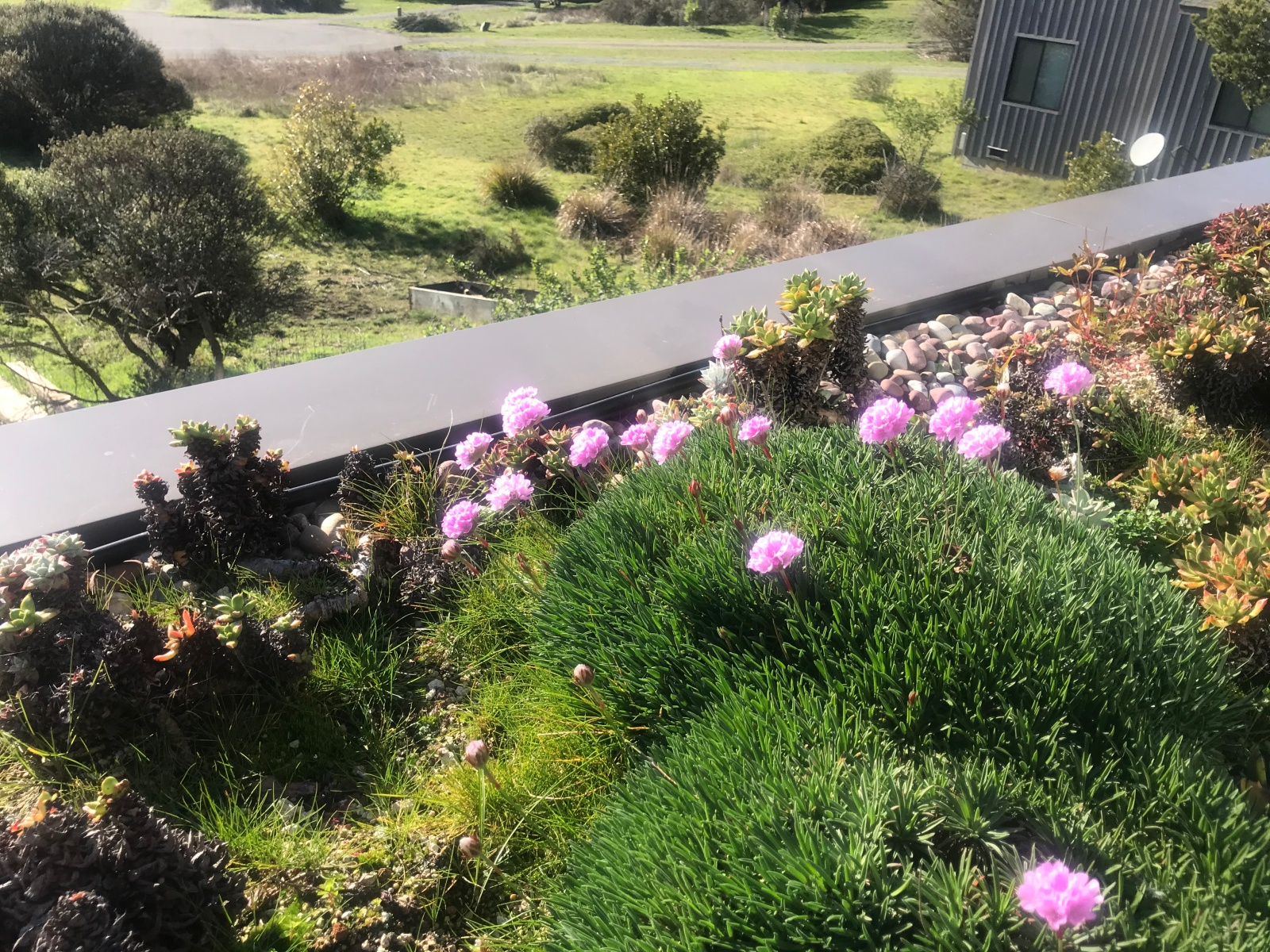 Captured groundwater is stored in cisterns for irrigating the living roof. The landscaping is irrigated with collected greywater that is fed underground to each plant. The living wall system is capable of supporting vegetables, and is watered with a third system of recycled water (which will also house fish in the future). The sounds of the recycling water play with the ocean waves. This approach also assists in fire management, as the home is encompassed by a truly defensible space that does not dry out.

Living roofs, or sod roofs as our early architects called them, may increase their desirability as an architectural feature for Sea Ranchers, as we seek ways to improve protecting our dwellings from the risk of wildfires. And following the examples of MacKinnon, captured and recycled watering systems would not only water a living roof (and living wall), but also provide a valuable resource in the event of a wildfire. 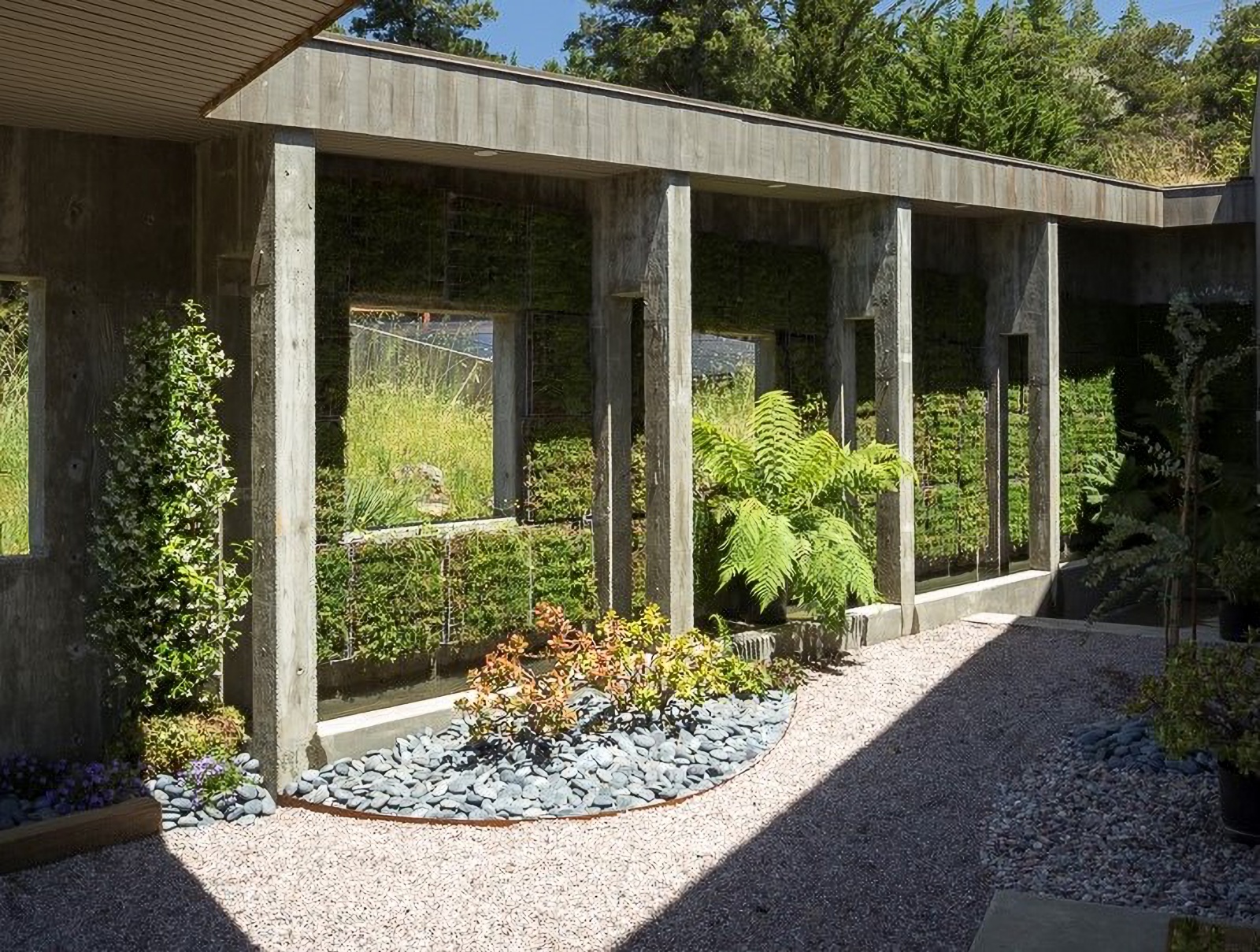 Hedgegate’s living wall provides a back drop to a restful place to relax while bring the greenspace up close. Image: Janet MacKinnon

A properly maintained living roof incorporates fire protection into its function, while also having a cooling effect on the environment compared to an average non-vegetated heat absorbing roof.

Living roofs, or sod roofs as our early architects called them, may increase their desirability as an architectural feature for Sea Ranchers, as we seek ways to improve protecting our dwellings from the risk of wildfires. And following the examples of MacKinnon, captured and recycled watering systems would not only water a living roof but also provide a valuable resource in the event of a wildfire. 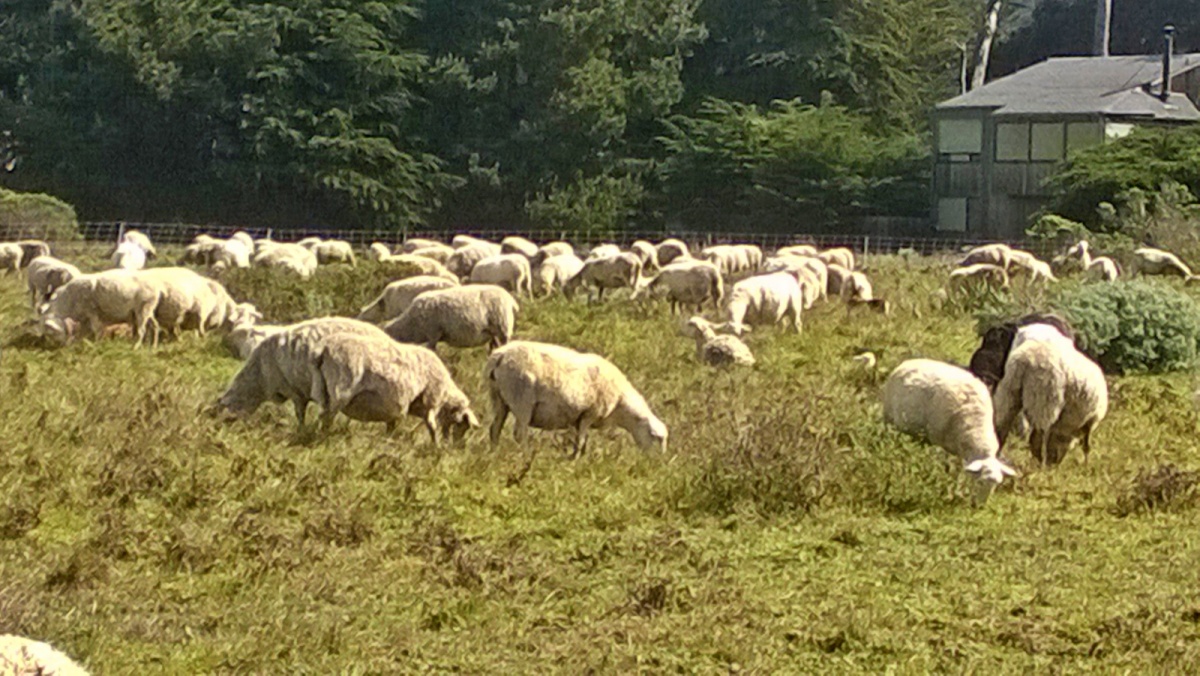 Adapted from an article that appeared in The Sea Ranch Association’s The Bulletin, March 2021. 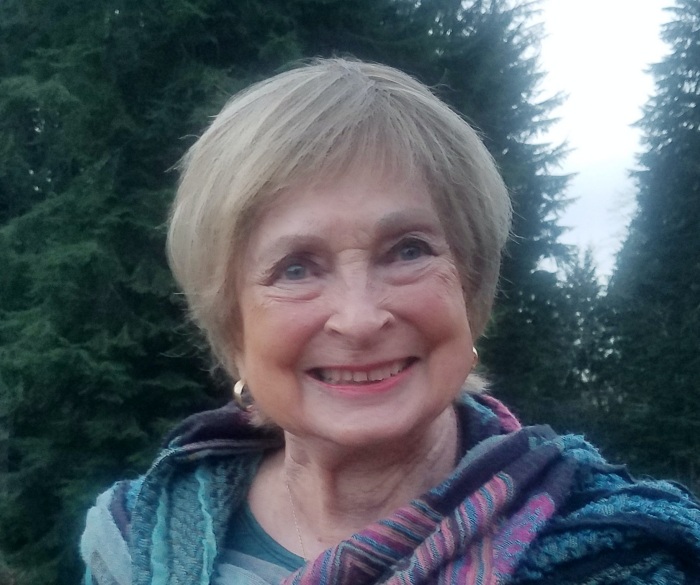 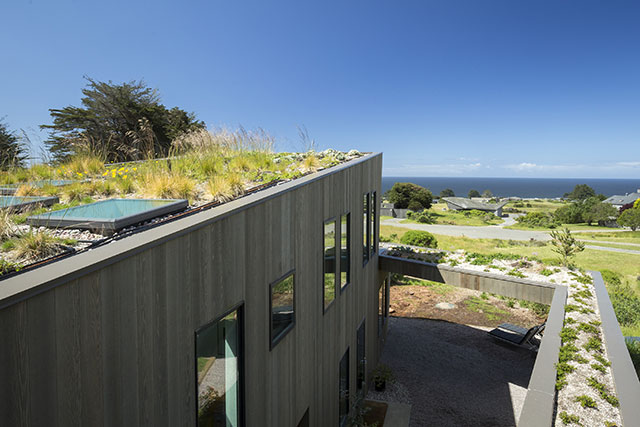