Back in July, we reported on how global automation specialist Autogrow and New York-based Agritecture Consulting were appealing to greenhouse, protected cropping and vertical and indoor growers to take part in their Global CEA (Controlled Environment Agriculture) Census.

The survey closed on July 22, 2019. Image: Agritecture and Autogrow

With 316 total respondents representing 54 countries, the Global CEA Census Report is the most in-depth international survey of indoor and controlled environment agriculture ever conducted.

Despite rapid growth, data is notoriously difficult to come by in the CEA industry.  According to the two companies, farm operators see the potential for improvement and are optimistic about
the future, but often express frustration at not knowing where to turn to for help.  Confounding this is the sentiment from farmers that many consumers, and particularly local governments, lack clarity around the benefits of local and controlled environment farming.  In the report, Autogrow and Agritecture paint a clearer picture of the global CEA industry by identifying important trends and contextualizing them for a wider audience.

The Global CEA Census ran from June 4 to July 22, 2019, asking growers around the world a total of 45 questions.  It was promoted primarily through both companies’ social media channels and with the help of various industry media partners, including AgFunder.  One respondent won a free trip to NYC AgTech Week in September as part of the Census promotion.

Major takeaways highlighted by Autogrow and Agritecture include:

● Controlled environment agriculture has become a truly global industry.  Two-thirds of respondents came from outside the U.S., and 30% were from developing parts of the world.
● Controlled environment farms are diversifying by expanding their crop choices far beyond leafy greens and herbs.
● While the average age of traditional farmers continues to climb, CEA defies the trend by attracting younger professionals to the agriculture industry.
● CEA is experiencing an entrepreneurial boom of new entrants.  Nearly half of all farms started in 2019 had founders with no prior experience in agriculture.

Read much more at the First-Ever Global CEA Census Report

The report dives into additional demographic patterns, as well as growing methods; facility types; marketing strategies; challenges to growth; future outlook by farmers; and more.  The companies look forward to making the survey an annual occurrence with increased participation, particularly amongst greenhouse growers.

The first-ever Global CEA Census Report is available free from Agritecture Consulting for download at: www.agritecture.com/census

Watch Keynote Henry Gordon-Smith of Agritecture at the #VirtualSummit2019 Now 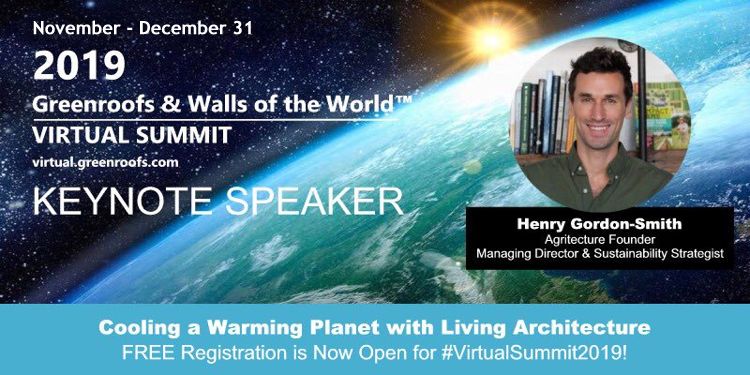 Don’t miss the excellent Keynote video “The Economics of Vertical Farming” by HENRY GORDON-SMITH, Agritecture Founder and Managing Director, and sustainability strategist now playing at our Greenroofs & Walls of the World™ Virtual Summit 2019 with Free Registration through the end of December.

Green Infrastructure
Our July 2020 Monthly Newsletter Is Out