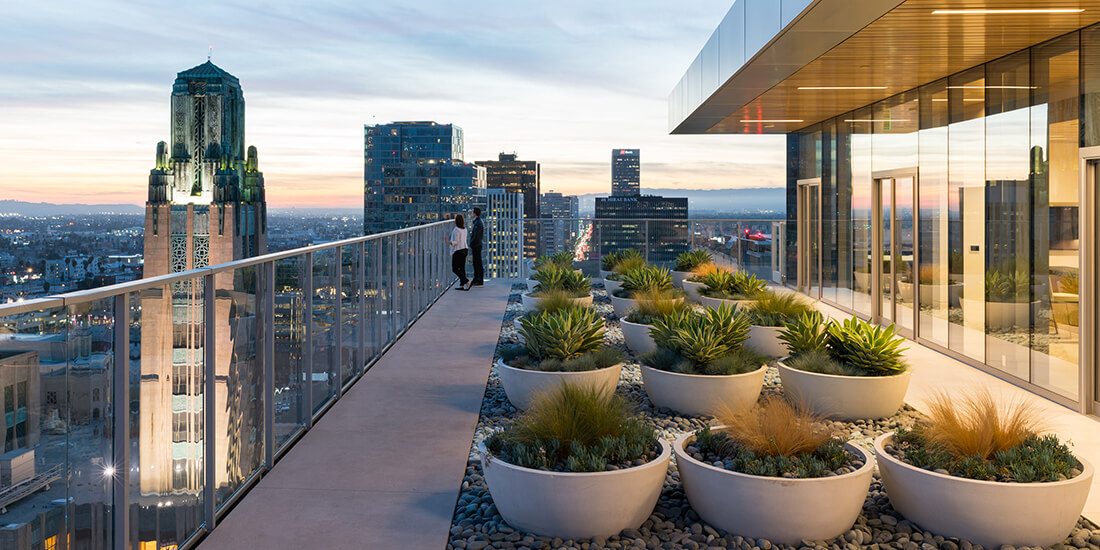 Though seemingly opposite environments, cities are a lot like rainforests. At ground level, the world is dank, dark, and full of predators. Inhabitants seeking fresh air, sunshine, and privacy have only one direction to go: up. So in the urban jungle, it’s only natural to build a “canopy” in the form of rooftop architecture. The popularity of rooftop amenities across residential, commercial, hospitality, and even health-care projects shows that’s exactly what’s happening.

According to Nathan Wilcox, principal at Austin, Texas–based architecture firm Sixthriver, the current obsession with rooftops began in the early aughts, when the US Green Building Council’s Leadership in Energy and Environmental Design (LEED) rating system brought sustainability to the forefront for architects, developers, owners, and regulators. In 2002, the City of Chicago passed an ordinance making green or reflective roofing compulsory for new and refurbished roofs. Thereafter, green roofs flourished.

Clients love rooftops because of the competitive advantage. Occupants love the view. “From one of our buildings [in Los Angeles], you can see all the way to the ocean, the Hollywood sign, the Santa Monica Mountains, and downtown. You can’t get that kind of vantage point without going onto the roof,” says Ha, whose firm’s projects include the multi-use 3033 Wilshire tower in Los Angeles. “There’s just something about being up high. It fills you with a sense of belonging to something bigger.”

Probably not, but that won’t stop them from being built. “Ten years from now I think rooftops will probably be dialed back a little bit, but I don’t think they’re going away,” Wilcox says. “Our planet is only going to get more and more full, so we’ll need to continue maximizing all of the surface area in developments. Plus, there’s a ‘wow’ factor. These spaces are just really cool.”

Read more: Is the Rooftop Architecture Renaissance a Fad or a Fixture?

1 reply to "Is the Rooftop Architecture Renaissance a Fad or a Fixture?"