Voted one of 2013’s “100 Most Creative People in Business” from Fast Company – at # 3, no less, Diana Balmori has been artfully leading the combined fields of landscape design, architecture and urban planning for decades, and it is a must to watch her Keynote Video: “Green Roofs to New Cities” from our Greenroofs & Walls of the World Virtual Summit 2015 ~ Connecting the Planet with Living Architecture: People, Projects & Design above or on our VS2015 Virtual Summit 2015 playlist on our GreenroofsTV channel on YouTube. 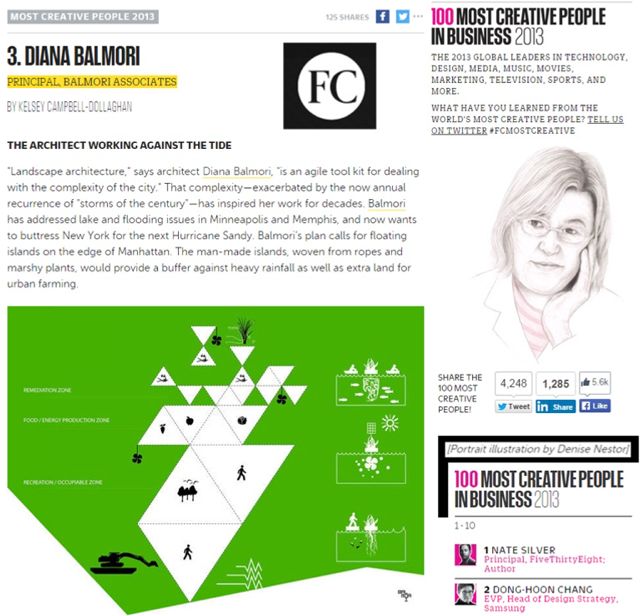 Based in New York City, Diana Balmori is the renown landscape designer and principal of Balmori Associates. She has received numerous accolades over the years, and has been internationally recognized for her progressive body of work.  Diana says, “The big picture is that half of the world lives in cities; it will be 2/3 by 2025.  Cities are major producers of all the things which are feeding climate change. Green roofs are a simple tool we could us to change this effect, if used at the macroscale.  Green roofs can also play an urban role as open space and as connectors.”

Diana was one of the early proponents of greenroofs and living architecture, and her 2005 research piece/inventory study on Long Island City – and its resulting “Asthma Alley” – demonstrated how living roofs could affect a direct health-oriented benefit in communities. This research resulted in greenroofs being constructed atop Silvercup Studios and the Gratz Industries Company. 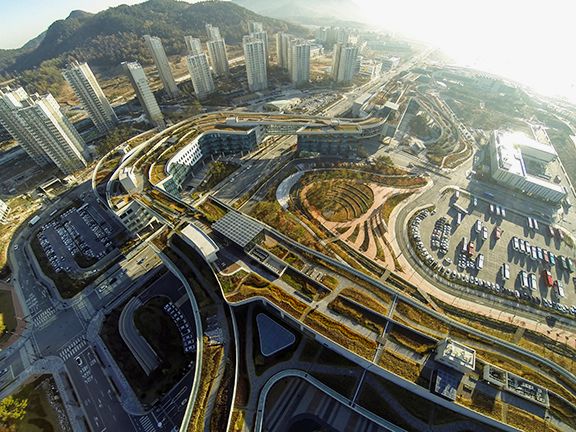 Diana and her firm recently completed the enormous new governmental city of Sejong, Public Administration Town in South Korea.  Based on the previous natural attributes of the mountains and rivers on the site, her large masterplan introduced the idea of a landscape taking the primordial organizing idea to organize the architecture – the result is buildings interconnected with sweeping, continuous greenroofs.

All of these projects will be addressed in her Keynote video, along with others.  Her “Green Roofs to New Cities” video was produced by Stacked Up TV Productions, with visuals by Joseph Maida, Mark Dye, Efrain Mendez / archframe.net, Bilbao Ria 2000, University of Iowa and Balmori Associates with the design teams of each project. 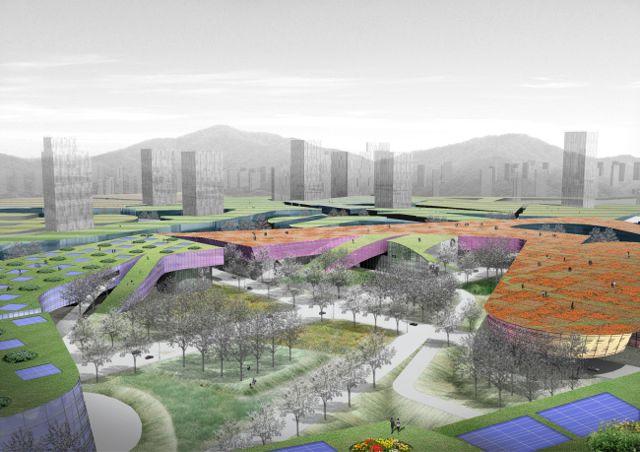 New York, NY, USA. Diana Balmori founded Balmori Associates in 1990. The landscape and urban design practice is recognized internationally for designing sustainable infrastructures that serves as an interface between landscape and architecture. In 2006, she created BAL/LABs within Balmori Associates, to further push the boundaries of architecture, art and engineering: Green Roofs, Floating Islands, Temporary Landscapes, Forms of Representation, and Zero Waste City, among others.

Diana keeps an active voice in national policy and decision-making on topics that relate to landscape design, architecture and urban planning. She has served as: member of The United States Commission of Fine Arts in Washington, DC; a Senior Fellow of Dumbarton Oaks, Washington, DC; a member of the Allston Development Group at Harvard University, Boston, MA; on the Board of The Van Alen Institute, New York City; The Lower Manhattan Development Corporation for the World Trade Center Site, New York City; and as a Committee Member for the Comprehensive Design Plan for the White House.

Diana’s opinion-editorials and articles about her work have been featured in Dwell, The Architects Newspaper, Monocle, El Pais, PBS, WNYC, Design Observer, and Utne Reader, which named her one of fifty “Visionaries Who Are Changing Your World” in 2009. She was named Fast Company’s Third Most Creative People in Business (June 2013) and one of ten Innovators by Architectural Digest (September 2013).

Her book A Landscape Manifesto (Yale University Press, 2010) has received international attention and was recently translated into Chinese. Her most recent book is Drawing and Reinventing Landscape (A/D Wiley, 2014). Since 1993 she has been a Critic at Yale University in both the School of Architecture and the School of Forestry and Environmental Studies.

Read about “Green Roofs to New Cities” by Dr. Diana Balmori video’s 5 Key Learning Objectives which I identified for participants of the Virtual Summit 2015. 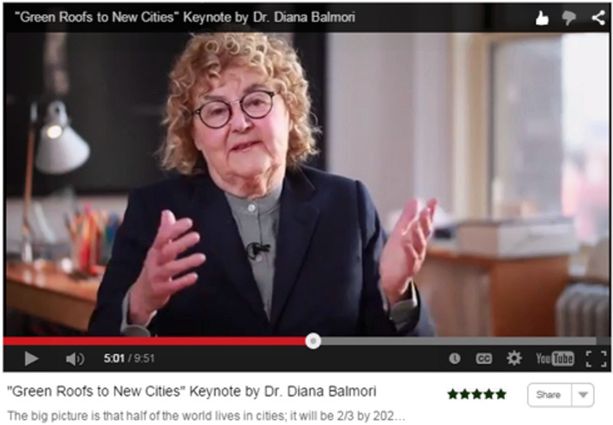