Today we have the pleasure to air the “Reflections of a Green Roof Campaigner and Visions of the Future” Keynote Video by Dusty Gedge, Co-founder of Livingroofs.org and President of the European Federation of Green Roof Associations (EFB), among others.

Dusty has been a frequent collaborator of Greenroofs.com, contributing several Guest Feature Articles over the years.  And, he was an early supporter of our inaugural 2011 Virtual Summit where he participated in the “Biodiversity and Greenroofs” Panel Presentation with Christine Thuring, Nathalie Baumann, and Gary Grant. 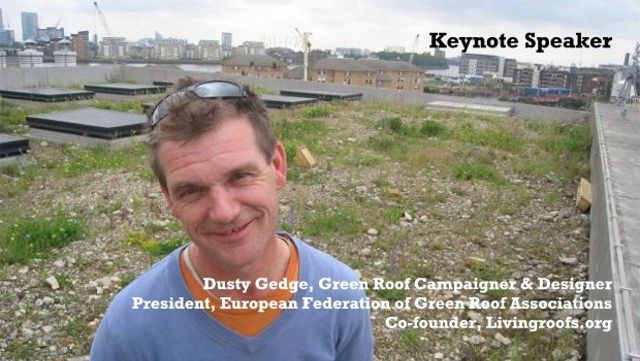 “London, UK. Dusty Gedge is a green roof campaigner and designer, who has actively promoted green roofs in the UK since 1997. He has designed a number of seminal roofs and helped develop the London Green Roof Policy. He is also the current President of the European Federation of Green Roof Associations (EFB), established three PhD studies on green roof research, and has a particular interest in biodiversity on green roofs. He is also a writer, blogger and sometimes TV presenter.

Dusty is co-author of Small Green Roofs: Low-Tech Options for Greener Living, 2011 and DIY Guide to Green & Living Roofs, among other publications. In 2004 Dusty co-founded Livingroofs.org, a non-profit organisation established to promote, advise upon and seek research into green roofs and similar structures within the context of urban and rural regeneration. In 2012 he travelled and worked in Ecuador on a film for the Yasuni TT initiative that aims to protect the national park from oil exploration, and has been working in Sweden, France and elsewhere on green roof policies and guidelines.” ~ VS2013

Watch the “Reflections of a Green Roof Campaigner and Visions of the Future” Keynote Video by Dusty Gedge below or see it specifically on its own channel, the Greenroofs & Walls of the World™ Virtual Summit 2013: