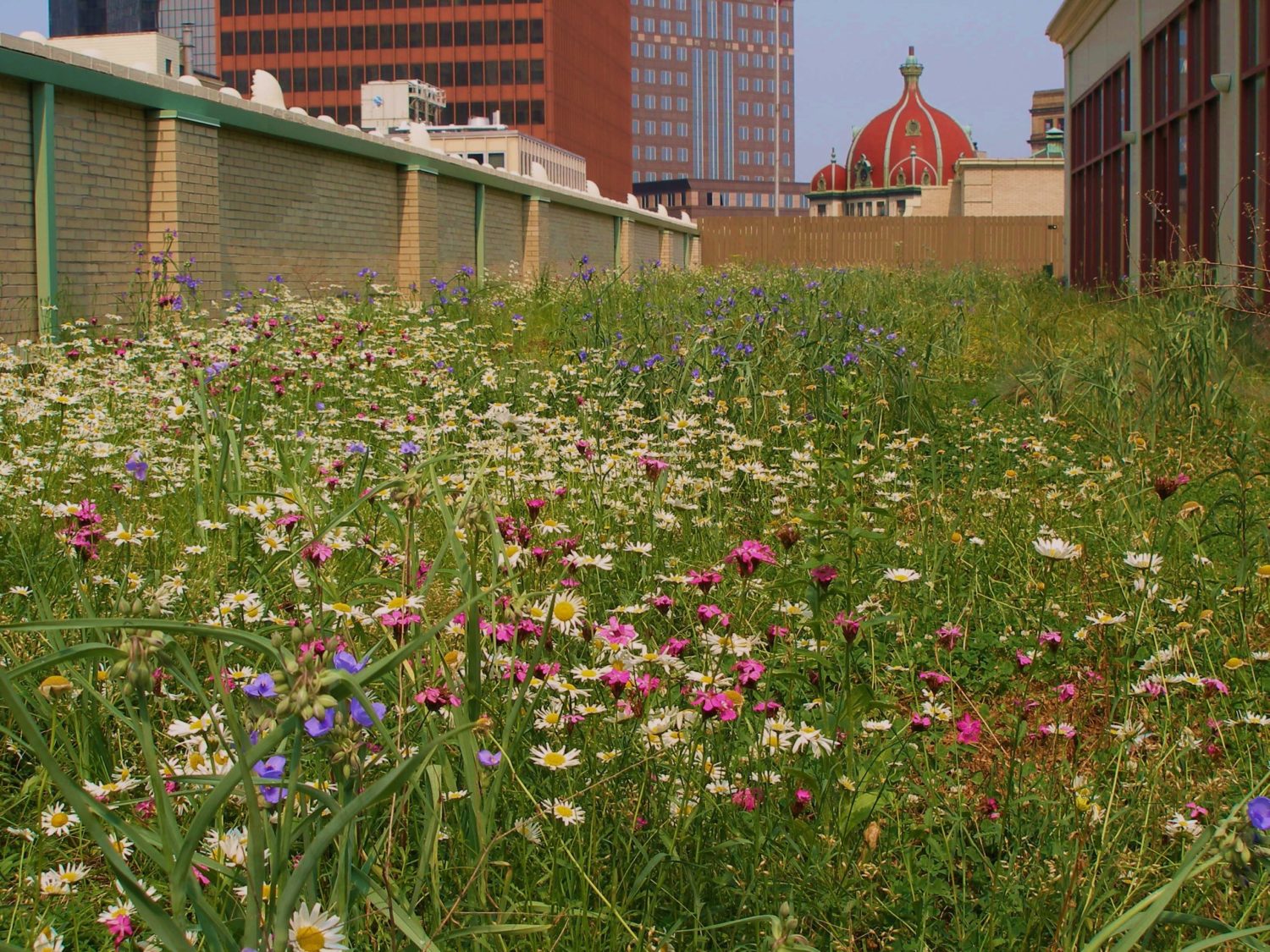 Charlie Miller, P.E. and his company Roofscapes, Inc. have been responsible for a large number of award-winning greenroof projects, including this one. His private and public portfolio runs the gamut from municipal to corporate, institutional to retail, and even includes some single-family residences. Charlie won the 2005 Green Roof Award of Excellence with the Heinz 57 Center/Gimbels Building Restoration in the Extensive Industrial/Commercial category, and we featured  it in the 2009 Greenroofs of the World Calendar™ by Greenroofs.com for the month of March, above.

Formerly the Gimbel’s Department store, the Heinz 57 Center in Pittsburgh, PA is a wonderful example of urban renewal. Closed and neglected for about 14 years starting in the late eighties, the now restored building has been put to reuse not only in a sustainable, but beautiful way. In 1998 architects Burt Hill Kozar Rittlemann Associates (now Burt Hill) were brought on board to redesign the historical but ailing structure.

Along with McKnight Development Partners, the architects incorporated a dramatic 50′ diameter octagonal atrium which runs from the roof down through seven floors. Suddenly flooded with natural light, the Heinz Corporation was enticed to occupy the top seven floors for their North American headquarters. Yet curiously, environmental concerns were not driving factors for the greenroof then; aesthetics, however, definitely were.

Although the building itself was surrounded by a spectacular city panorama featuring a soaring cathedral amidst an eclectic mixture of towering skyscrapers, the views from the lovely floor-to-ceiling windows of the fourteenth-floor penthouse suite were less than exciting or acceptable: a hot black rubber roof under an equally unappealing nine-foot-high brick parapet wall greeted Heinz occupants.

So the architects decided a pleasing landscape atop the roof would do the trick.

Completed in the fall of 2001, the Heinz 57 Center was the first vegetated roof in downtown Pittsburgh, where executives enjoy sweeping meadow vistas wrapping their offices and blanketing the thirty-foot-wide terrace. Four informal seating areas constructed with high-density recycled plastic lumber decking and concrete paving blocks provide informal gathering spots; by all accounts the colorful corporate roof garden is a hit!

Last year I was interviewed by Carmen J. Lee who was writing for h – The Magazine of the Heinz Endowments, reporting how “Pittsburgh roofs are the new fertile turf for environmentally sustainable construction projects that aim to dig in and blossom” in her article “Top Soil” (pages 24-31). The Heinz 57 building was, of course, one of the sites featured and you’ll see I was quoted with more of an inspirational bent rather than specific to the project.

Carmen also profiled the local environmental group, 3 Rivers Wet Weather, which is responsible for utilizing $525,000 in federal funding plus a $125,000 Heinz Endowments grant to sponsor a 2005 project to create more greenroofs in the city.

In a city with an over-burdened sewer system with frequent overflows, Pittsburgh officials and researchers cite the greenroof project often as a fine example of sustainable redevelopment.   Situated within a pedestrian-friendly mixed-use business district with shops, restaurants and businesses, the Heinz 57 Center is worker friendly as well as eco-friendly, providing their 800+ employees with a variety of alternate forms of transportation.

Although Heinz executives may not have initially specified the extensive greenroof for ecological reasons, they certainly appreciate the many noticeable environmental benefits, such as the cooling respite from the city canyon and the reduction of stormwater runoff; it’s estimated that the roof retains 55% of yearly rainfall.

Over 18,000 plants were selected by Roofscapes, who used their Type III: Savannah Roofmeadow ® system. Landscape architect Steven L. Cantor researched this project in depth, and you can read  his extensive case study including complete plant lists on pages 139-142 in the excellent book “Green Roofs in Sustainable Landscape Design,” 2008, available for purchase on Amazon.com.

Steven relates how the Heinz 57 Center plant selection encompassed “32 xeric species from nineteen plant genera, including six North American natives; approximately one-third of the plants are sedums, and the balance  is a range of herbs, meadow grasses, and meadow perennials that provide differences in plant height, texture, and bloom color.”

It’s hard to believe, but the roof is not irrigated and has flourished with minimal maintenance, which includes twice yearly  weeding and an annual light application of fertilizer.

Pittsburgh has really come along way from its gritty industrial Steel Town roots, emerging as a  leader in green building. According to the Green Building Alliance, as of July, 2009 the City of Pittsburgh is home to 39 LEED-certified buildings, ranked eighth in the United States for overall number of projects. 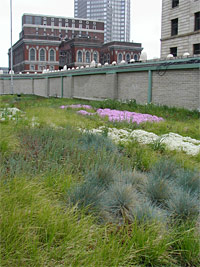 About two dozen more eco-friendly  greenroofs are found within metro Pittsburgh; read the May 19, 2009 article “More city buildings cultivate savings by covering roofs with plants” by Sally Kalson of the Pittsburgh Post-Gazette to learn about additional living roofs in the area.

We only have a handful of those references listed, so remember to send us case studies of these other projects so we may share it with all of you in the greenroof community in The Greenroof & Greenwall Projects Database.

Kudos to the designers, corporate leaders and all the stakeholders of this inspiring city-core Heinz 57 Center renovation for their foresight – environmental, aesthetic, or otherwise – to successfully integrate a greenroof into the overall design for the benefit of the building’s occupants! 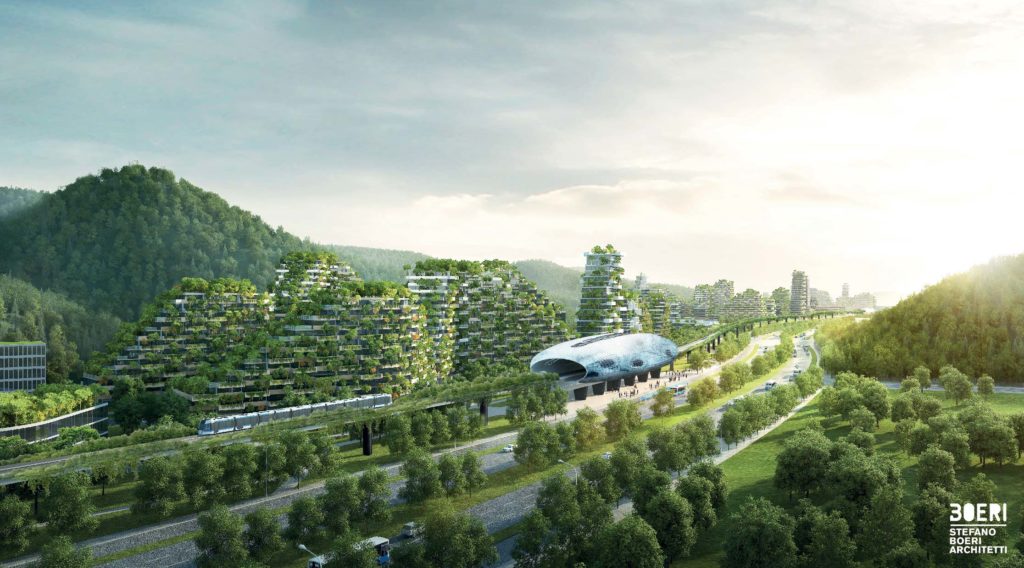