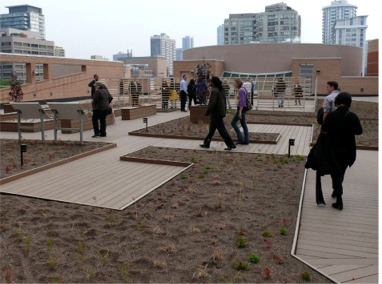 The YMCA of Greater Toronto is a dynamic charity connecting with more than 400,000 people at 235 locations across the GTA to build strong kids, strong families and strong communities. Visit the YMCA of Greater Toronto here, their greenroof page here, and the Metro Central’s Green Roof Blog here, which has many photos and information about the project. See the TD Bank Financial Group Press Release of October 21, 2009 here.

The YMCA of Greater Toronto at 20 Grosvenor Street is a charity focused on community support and development. It aims to provide every individual in our community with opportunities for personal growth, community involvement, and leadership. To utilize their space and provide an environmentally friendly change to the Toronto Metro Central YMCA Health, Fitness and Recreation Centre, the YMCA of Greater Toronto created a greenroof that incorporates the former rooftop running track.The greenroof acts as an oasis in the city from dawn to dusk, and the roof includes donated materials such as decking and photovoltaics. YMCA members will be able to enjoy the beautiful new green space ? featuring the running track, outdoor studio, and benches and pathways from April to November.

The Metro-Central YMCA was built with 150 installation volunteers who contributed more than 1,000 hours to the project and made possible thanks to a generous $250,000 donation from TD Bank Financial Group. The roof drastically improves existing space and provides numerous eco-benefits like vegetation, reduced storm water runoff, energy efficiency, and a decrease in radiated heat. The greenroof is open to the public (who must first ask at the main desk for a pass). As of September, 2009, it is the largest publicly accessible greenroof in all Toronto. The new downtown greenroof was part of the Sustainable Toronto tours for the CitiesAlive! World Green Roof Infrastructure Congress which was held from October 19-21, 2009.The roof holds 100 cubic yards of growing medium, to a depth of 6″. “In all, some 1,800 plants went into the waiting beds, two-thirds of them native species and all of them selected for their ability to live in shallow soil (just six inches deep), withstand drought, and survive the annual freeze/thaw cycle. Our list includes such choices as Little Bluestem grasses, Lance-Leaf Coreopsis, Black-Eyed Susan, Upland White Aster, Wild Onion and Wild Chives (all in the irrigated areas); and Blue Spruce and Dragon?s Blood sedums and Side-oats Grama (in the non-irrigated areas). The Shubert chokecherries chosen for the five planter boxes are just as tough: they grow right up toward the arctic, and can even survive on rock, (YMCA website). The grand opening and celebration party for the greenroof was held on September 10, 2009.