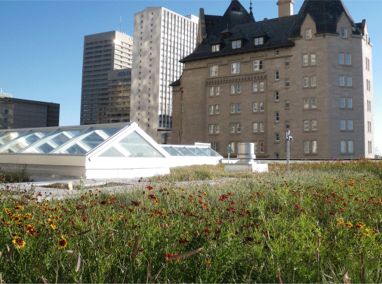 Williams Engineering is located at 10010 100th Street, Edmonton, Alberta, Canada. The Williams Engineering Building was featured in the month of April in The 2014 Greenroofs & Walls of the World™ Calendar. Read Tips for building a green roof in Edmonton by Scott Messenger in the Volume 4, Issue 2 of techlife magazine and Green rooftops take root by Lawrence Herzog in Inside Edmonton, Vol. 28 No. 17, of April 29, 2010.

Williams Engineering is a company that has emphasized sustainability from its start. Overlooking Edmonton’s river valley, its headquarters also boasts a healthy and sustainable green roof system.

Installed in June, 2010, the beautiful rooftop meadow on the Williams Engineering Building is a rare green roof success story in the harsh climate of Northern Alberta. Designed as part of ongoing research through the Northern Alberta Institute of Technology (NAIT), the retrofit project aims to test which plants will be most resilient in Edmonton’s dry and windy rooftop environments.

The retrofit proved especially challenging because of structural limitations of the existing roof. As a result, growth media depths vary across the entire roof, with 3-4” areas in the centre and 6-8” areas along the edges of the roof.

The retrofit also included thirteen 2’ x 8’ research test plots which were designed by NAIT to test growth media at depths of 3” (75 mm), 4” (100 mm), and 6” (150 mm). For the test plots, Dr. Leonie Nadeau, a retired NAIT senior, led a team of students from NAIT’s Technology Management and Landscape Architectural Technology programs, along with a group from H.P. Wagner High School. Students were involved in both research design and investigation. The best performance results were expectedly seen in plants in the deepest growth medium.