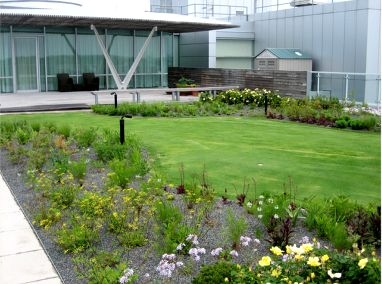 The Clinton Presidential Library and Museum is located within the Clinton Presidential Center and Park at 1200 President Clinton Avenue, Little Rock, Pulaski County, AR; visit their website. The Center also includes the Clinton Foundation (Little Rock office), the University of Arkansas Clinton School of Public Service, Caf?42, and the Clinton Museum Store. See the case studies from Ennead Architects (formerly Polshek Partnership); Leonardo Academy, LEED Consultant; Pendragon Fabrication, wind chime fabricators for the greenroof; and Natural Habitats, where you can see lots of great photos. Heidi Natura of Living Habitats Says “Near the end of November 2007, C-Span held an interview with President William J. Clinton to talk to him about his Presidential Center. During the interview they went up onto the roof of the center to highlight the benefit of having the living roof installed.” See the video on her website. Read Bridge of Possibilities by David R. Macaulay of November 3, 2010 in eco-structure. Download the November 21, 2007 press release (PDF) from the Clinton Library, and see the Associated Press article Clinton Library Gets ‘Green’ Roof by Andrew DeMillo of November 19, 2007.

President Clinton imagined a park that would attract the local community as well as visitors from around the world to the Clinton Presidential Center, offering a space where families could come and enjoy the natural beauty along the Arkansas River.

The William J. Clinton Presidential Library, a part of the National Archives, has been designated as one of the most energy efficient and environmentally friendly places to work in the United States by the U.S. Green Buildings Council. The 153,779 sq. ft., Presidential Library in Little Rock, Arkansas is the first federal building to receive a platinum rating, the highest in the LEED for Existing Buildings (Clinton Library Press Release of 11.21.07). When it opened in 2004, the $165 million library complex earned a Silver LEED rating – the first presidential library to do so, and in early November, 2007, it received Platinum certification for existing buildings (LEED-EB) from the USGBC.

The William J. Clinton Presidential Library and Museum greenroof project was completed in late November, 2007, using the Tremco greenroofing system: The greenroof is 14,000 square feet over a section of library devoted to presidential artifacts which doubles as a garden area for former President Clinton’s personal office and residence. A little more than half the area is covered with plants and grasses. Although only a portion of the roof was greened initially, future plans include for the entire roof to have greenroofs

The William J. Clinton Presidential Center has won several awards including an AIA National Honor Award for Architecture in 2006, an AIA/Committee on the Environment Top Ten Green Projects honorable mention in 2007, and an AIA/American Library Association Building Award in 2007. In 2009 the Washington, D.C.-based Center for Environmental Innovation in Roofing (Center) presented Tremco the Excellence in Design for Best Vegetated Roof award for the William J. Clinton Presidential Library and Museum.

More than 150 species are featured, including Arkansas bluestar, a perennial with needlelike leaves and blue flowers, and butterflyweed, a shrubby perennial with star-shaped orange flowers that attracts butterflies. Over 90 species of plants were initially planted in approximately four truck loads of lightweight engineered growing media from ItSaul Natural. And a special request for yellow roses was added for the former president, since it was a favorite of his mother, the late Virginia Kelley. The putting green and other garden areas are illuminated by solar panel powered lights. All fertilizers are organic.

Retained by landscape architect Heidi Natura of Living Habitats, Pendragon Fabricators created ornamental wind chimes that are an artistic and musical metamorphosis of the concept of ?dew-catchers? specified in the design of the greenroof. One of the themes of the greenroof was ?The Flowing River? as the building cantilevers over the wetlands adjacent to the Arkansas River to the north. The wind chime racks were constructed of aluminum due to the loading limitation of the existing roof structure. Looking down on the racks from the meandering boardwalks you see spiraling forms reminiscent of the whirlpools and eddies in a gently flowing body of water.

The Associated Press, see below, reported: “Clinton ? who has used his nonprofit foundation to promote sustainable development and environmentally friendly building practices ? would like to see green roofs used nationwide. He recently announced a program through his foundation aimed at helping homeowners and commercial building owners modernize their buildings to reduce energy use.” When President Clinton built his library here, part of what he wanted was something that would serve as an example to others, both in design and architecture, but also in sustainability and its footprint and its coexistence with the city landscape,” Clinton Foundation spokesman Jordan Johnson said.” Over 100 people that include National Archives personnel, museum volunteers, and support staff work in the Clinton Library. The facility has seen over one million visitors since its opening in November 2004.