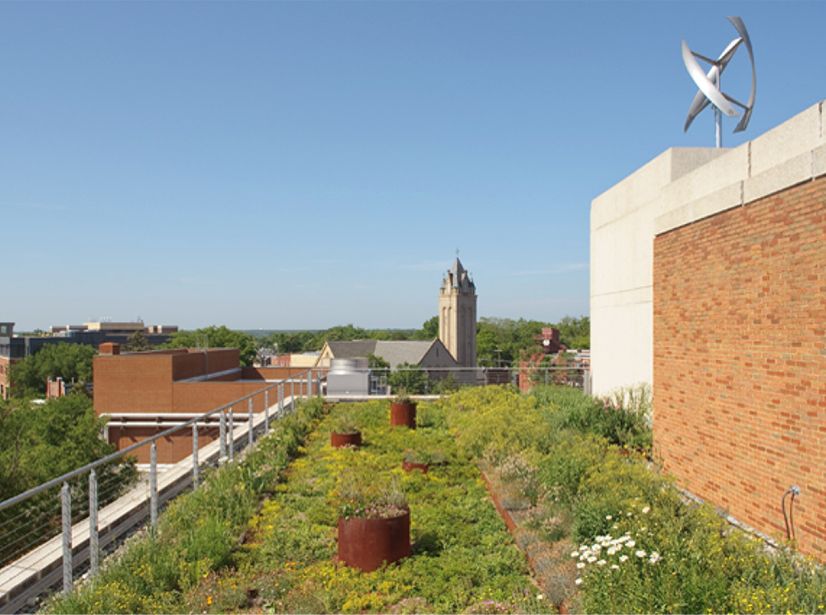 Completed in the fall of 2011, a second greenroof (following the VCU Rice Center) was installed at Virginia Commonwealth University on the southeast-facing roof of the Pollak Building on the Monroe Park Campus. The legacy project of the 2009-2010 Monroe Park Campus Student Government Association (SGA), the living roof serves as a living classroom to educate the campus community as well as a small gathering place for students.

Designed by VMDO Architects with Siteworks Studio, this walkout terrace located on the 5th floor of the Pollak Building Visual Arts Building at VCU provides for an opportunity for the students and faculty to congregate outside. Installed by Capitol Greenroofs, the assembly utilizes a Carlisle Garden Roof with Optigreen drainage and varying growing media depths, with a 1,500 sf flagstone patio over an IRMA roof. Rated to produce at lower wind speeds, VCU installed a 16 foot tall Eddy GT, 1 kW vertical axis wind turbine on the top of the southeast stair tower on the Pollak Building in the spring of 2012 which can be seen from the greenroof.

42″ high galvanized cable railings provide for fall protection. Custom made benches crafted of black locust, a locally native and rot-resistant substitute for teak, are located adjacent to a brick wall where a living wall was proposed but never installed. Corten steel planters were placed randomly in the planting areas. Galvanized grating leads to a new handicap accessible entrance and Pennsylvania bluestone flanks either side of the grating.

Aluminum lighted bollards and a lower guardrail was provided around the patio to discourage students from entering into the planted areas. The irrigation valve box was placed under the bench and the control systems were placed inside the janitor’s closet. Gravel covers all the lighting conduit and pipe for the irrigation. Two soil moisture sensors were placed in the planting areas to reduce water consumption that was applied to the system.

“The roof illustrates three different types of green roof planting strategies, conventional, meadow and native. The area of conventional green roof, the center portion of the roof, features a variety of low-growing sedum species, planted in 3 to 4 inches of growth media. (Sedum species, like cacti, are succulent plants, which can store water within their plant structures.) Sedums in this area are non-native species, selected for their hardiness and ornamental characteristics.

A second type of roof, a green roof meadow, occupies the outer, long edge of the roof. This section features somewhat taller plants, bedded in approximately 6 inches of growth media. Plants in this area are a mix of native and non-native species. The largest portion of the roofscape, closest to the building, features only plants native to Virginia – the first such green roof in the Commonwealth. Growth media in this section of the roof is approximately 12” deep, and can therefore retain more moisture than the other two sections of the roof, (VCU website, 2012).

“Students from the VCU School of the Arts Department of Interior Design spent a day planting perennials, grasses and succulents as part of a $20,000 project supported by the Monroe Park Student Government Association in conjunction with the Office of Sustainability and Facilities Management. Less than a year later, the roof was recognized by the Virginia Sustainable Building Network’s 2012 Green Innovation Awards as the winner of the Best Green Institutional Project – Special Commendation,” (VCU News, 2013).