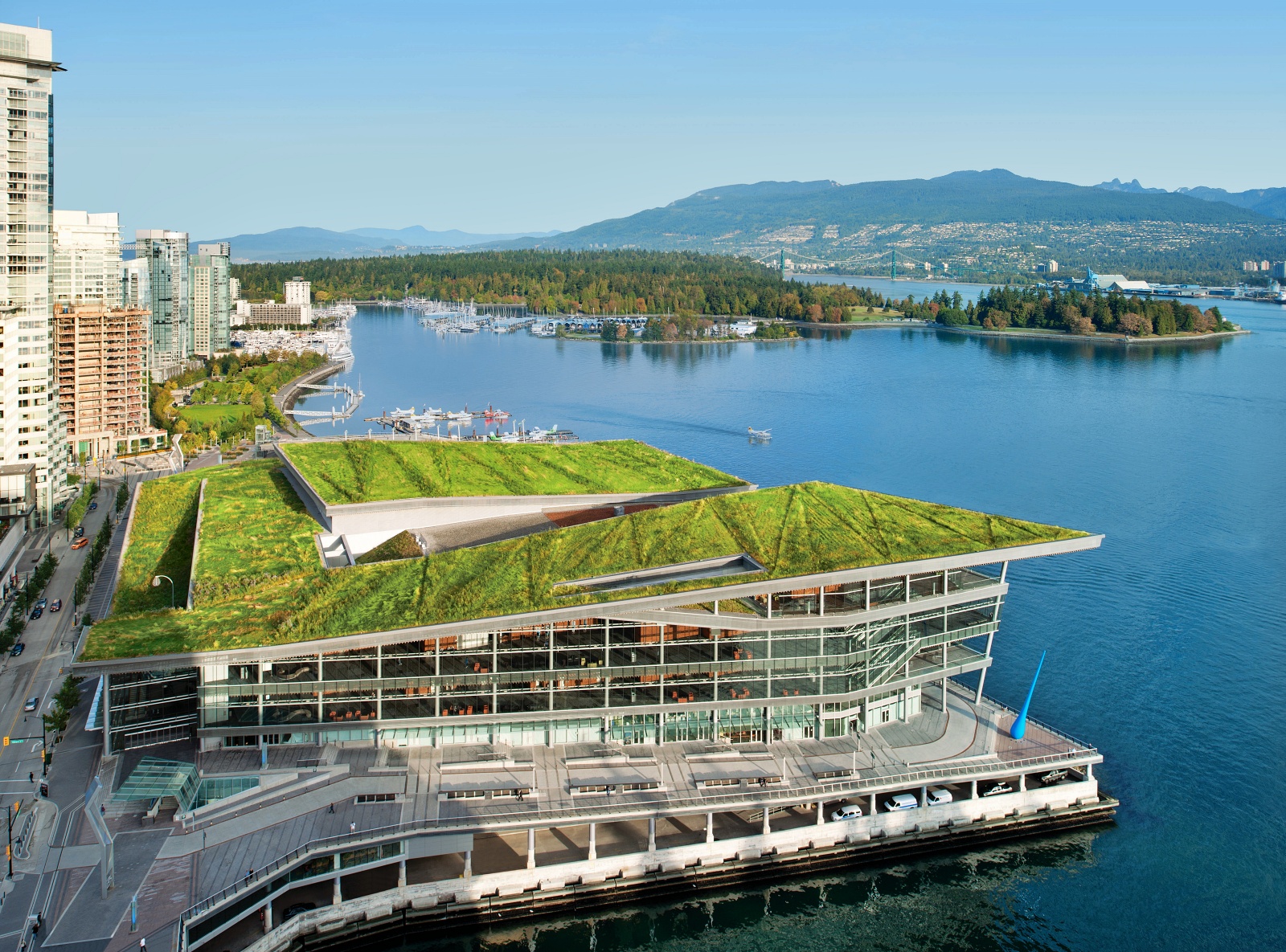 Learn about the following companies in the Greenroofs.com Directory: American Hydrotech and Soprema.

The Vancouver Convention Centre is LEED® Platinum for New Construction and LEED® Platinum for Existing Buildings by the Canada Green Building Council, the first convention center in the world to receive this highest level of LEED certification. Also known as the Vancouver Convention Centre West, it opened on April 3, 2009 and is truly a model in sustainability for a civic building of this size.

Designed by Seattle-based LMN Architects, the Vancouver Convention Centre West features a six-acre green roof, which is the largest in Canada and the largest non-industrial living roof in all of North America (as of April, 2009).

“The culmination of two decades of planning and redevelopment for its waterfront neighborhood, the project weaves together architecture, interior architecture, and urban design in a unified whole that functions literally as a living part of both the city and the harbor.

The extensive and complex program encompasses at once a single building and a new urban district. Occupying a former brownfield site on the downtown waterfront, the development is approximately 14 acres on land and 8 acres over water, with 1 million square feet of convention space, 90,000 square feet of retail space, 450 parking stalls, and 400,000 square feet of walkways, bikeways, public open space, and plazas. The public realm extends through and around the site including a waterfront promenade featuring restaurants, retail storefronts, and public art, while infrastructure for future development extends into the water.” ~ LMN Architects

Built over land and water on some 1,000 piles, the Vancouver Convention Centre Expansion Project was completed in late 2008. In order to ensure that the expansion and existing facility are fully integrated, a glass-walled connector links the facilities, providing delegates with exceptional harbor views as well as a seamless transition.

“We recognized that this was going to be an expansive building and that the roof needed to be part of the story. We saw it as a blank canvas to respond to the surrounding North Shore Mountains and neighbouring forest. We designed a six-acre/2.4-hectare living roof—the largest in Canada—and incorporated LEED® initiatives throughout the open space design. Our vision was to create a place to learn about urban ecology, and see how sustainability can make a difference. The roof moderates heat in the building, improves urban air quality, cleanses and reduces rainwater runoff, and creates valuable habitat. This new habitat became a self-maintaining, self-regenerating living roof with flushes of grasses and wildflowers appearing 12 storeys above Coal Harbour. Today, entomologists from UBC are using the roof to study insects and learn how living roofs contribute to biodiversity in urban environments.” ~ PWL Partnership

Featuring floor-to-ceiling glass throughout the expansion, the green roof is landscaped with more than 400,000 indigenous plants and grasses from the Gulf Islands, providing natural habitat to birds, insects and small mammals. This unique ecosystem is planted over 6″ of growing media, and the vegetated roof is just one of many environmental innovations included in the expansion.

“The reinstated natural habitat provides seasonal beauty as well as a seamless visual link to the adjacent park. The living roof serves as an “ecological staircase,” wherein select species filter and purify rainwater for storage and reuse, while attenuating sound, providing thermal insulation, and absorbing solar radiation that would otherwise contribute to the urban heat island effect.” ~ RANA

Plus, a whole new planting palette of native species for the Pacific Northwest was established, having trialed the large scale propagation of never before commercially-grown native species – in a novel potting mix – free of peat, a first. The custom growing media includes sand dredged from the Fraser River to allow the shipping channels to remain open; organic matter from kitchen scraps, waste timings from local gardens and parks; and lava rock – with no peat moss (Vancouver’s 6 Acre Living Green Roof).

The slope of this roof is quite unique and ranges from 3% to 56%. PWL Partnership Landscape Architects Inc. led the green roof team in developing the design, plants selection, growing medium design (over 5000 cubic meters of growing medium weighing nearly 5 million kilograms were placed on the roof using conveyor belts), detailing, nursery propagation coordination and installation field review. They explain since the living roof is a complex system, moisture sensors and 43 kilometers of drip irrigation piping deliver treated black water during the summer months.

The areas over the Cactus Club restaurant and between the Convention Centre and Seaplane Court have a walkway with 9,500 square feet of green roofs of varying slopes using the American Hydrotech Garden Roof Assembly. And their GardNet® system was installed to retain the dramatic slopes and 1 gallon plants were planted within the cells. Additional growing media was added afterwards. In this portion of the walkway the slope is between 10:12 and 12:12 and the base formed the structure of sculptural elements, where the green roof terminates in a slope of 81 degrees (Richard Hayden of American Hydrotech’s Sloped and Complex Green Roofs from the Greenroofs.com 2011 Greenroofs & Walls of the World™ Virtual Summit).

“While we do not offer public access to the living roof, it is designed to be visible both inside and outside the building. We recommend that you visit the Jack Poole Plaza at the Convention Centre. There is a pathway on top of the Cactus Club restaurant, where an extension of the living roof is planted.” ~ Vancouver Convention Centre FAQs

LMN Architects state Vancouver Convention Centre West fully integrates the urban ecosystem at the intersection of a vibrant downtown core and is one of the most spectacular natural ecosystems in North America. Offering spectacular views of Vancouver Harbor with a dramatic mountain backdrop, the architectural approach creates a community experience that is simultaneously a building, an urban plaza, a park, and the most visible evidence of the project’s deep approach to ecology – its living roof – mixing the energy of convention visitors with the life of the city.