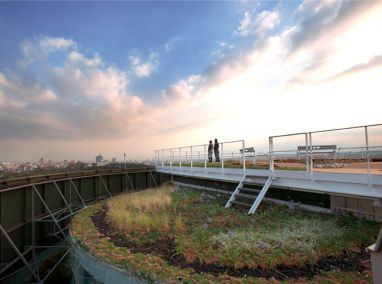 Completed on October 23, 2012, the adaptive reuse Transformadora Ciel project resulted in a three-level greenroof with a total of 4,704 square feet of greened area. The whole project was a restoration of a rooftop heliport that was no longer in use at the corporate offices of the client – the helipad structural components were re-used for the new construction. The space was restored to provide a workplace for sustainable and social projects from young Mexican entrepreneurs within a special Client’s program – now it is a productive co-working space for the Coca Cola Latin America HQ’s environmental financing subsidiary, Transformadora Ciel.

A unique feature of this project is that it is situated exactly in front of Chapultepec Park, the largest urban park in Mexico City, which provides a micro-climate with great humidity and a high precipitation rate, as compared to the rest of the city. It also offers a terrific view from a newly greenscaped 14th floor. Additional renewable energy features include new glazing and solar panels which almost completely power low energy LED lighting.

The greenroof project followed the NADF-013-RNAT-2007 standards for greenroof building and design established by the Environmental Ministry of Mexico City, which establishes several mandatory features such as a % of slope, elements of greenroof systems, and structural weight and materials, among others. The greenroof project is pending certification under this same scheme.

Zona Verde MX used more than 8,900 sq. ft. of a 100% PET recycled geotextile in the various areas. This translates to more than 20,102 recycled bottles of PET in the whole system.

Top level. With a perfect square shape, the level on top of the heliport was designed to capture stormwater along its 1,830 sq. ft. surface. The landscape design centered around low maintenance plants with low water requirements brought in from several providers in Hidalgo and Puebla (less than 100 miles from Mexico City). These providers were certified as “U.M.A.s” (Environmentally Managed Units) by the Mexican Ministry of Environment as official suppliers of Mexican native species, through a program that benefits plant producers’ communities. In addition, the soil substrate was designed to easily drain excess water to prevent the rotting of the cacti.

A 657 sq. ft. TECA wood deck was built to allow visitors to walk along this beautiful endemic space filled with native cactus and succulent plants. In addition, the deck was built out of a sustainable wood material certified by F.S.C. Over this deck, 4-PET-recycled benches were installed for the visitors to sit upon as they enjoy the expansive view.

Middle Level. Rojkind Architects and AGENT Collaborative Architectural Design created two middle spaces between the top and the ground rooftop levels upon which endemic grasses were planted. Zona Verde MX designed a plant palette that would show color and movement on these levels of landscape. Captured stormwater on other levels will be used to water these two sections.

Main Level. There are three sections on the main rooftop level. Two were designed purely as leisure gardens that provide some greenery to the surrounding offices, and the third is a 307 sq. ft. urban agricultural garden with 8-inch-deep rich soil to provide the right amount of potassium, nitrogen, and phosphorus to grow vegetables. Zona Verde MX planted 10 different crop lines with several types of veggies including: lettuce, coriander, broccoli, tomato, green tomato, Swiss chard, spinach, cabbage, and chiles. The first harvest of these delicious and organic vegetables was around one month later and they were taken to the company’s cafeteria.