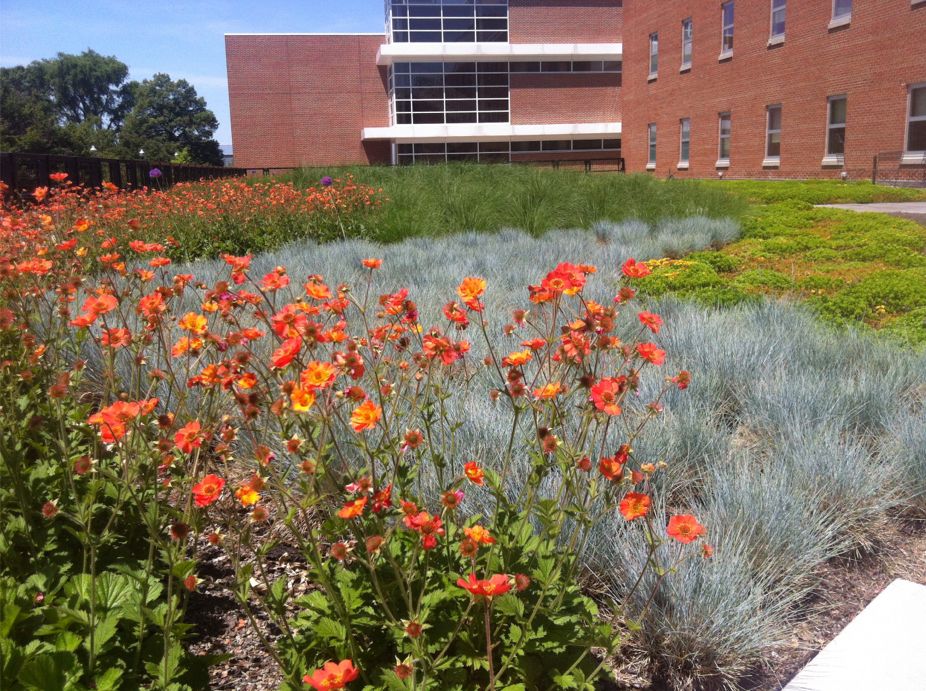 See the January 16, 2014 2:28 video ‘If you can dream it up, Ohio State has the resources to make it happen’ College Alumni Profile: Megan Welsh-Meier from Ohio State’s CFAES. Read the October 3, 2013 Ohio State’s First Green Roof Makes Debut by Martha Filipic in the CFAES News at The Ohio State University and see the 1:24 video Time Lapse: Chadwick Arboretum’s Green Roof by Walter Warkus and Brian Mowrey on YouTube. For additional information about the Ohio State University Green Roof at Howlett Hall, please contact Megan Meier of Higher Ground Green Roofs at: 614.949.6008.

Learn about the following companies in The Greenroof & Greenwall Directory: Roofmeadow; rooflite®; and Garick.

Chadwick Arboretum & Learning Gardens is a 60-acre public garden at The Ohio State University (OSU) and the Chadwick Arboretum has a newly installed 12,000 square foot green roof on Howlett Hall. Howlett Hall is home to the OSU Department of Horticulture & Crop Sciences and the Food Science Processing Plant.

Located at the back of Howlett Hall, the living roof was installed off the extended first floor over the Wilbur A. Gould Food Industries Center pilot plant. A goal of the Arboretum for many years, the original roof was a tar and chip roof that was hot and unattractive, as well as an under-utilized space on the urban campus.

The building was dedicated in 1967 and had been designed to house a rooftop garden, but but funding fell short at the time. The renewed efforts of a former student, Megan Meier, GRP of Higher Ground Green Roofs, jump-started the green roof campaign again and became the project’s coordinator in January 2010. Along with Mary Maloney, director of Chadwick, Meier began working on the project as a student and stayed on as a consultant after graduating in December 2011.

Recently completed on September 13, 2013, the Ohio State University Green Roof at Howlett Hall is open. This is the first publicly-accessible green roof in Columbus, Ohio, making it a demonstration site of green roofs in Ohio. Stop by during business hours Monday-Friday, or contact the Chadwick Arboretum for a guided tour.

It is estimated that 191,196 gallons of polluted stormwater runoff is diverted each year from the watershed of the Olentangy River, which is just a half-mile away with a projected annual savings of $10,374 in energy costs and roof maintenance.

The depth of the lightweight growing media from rooflite® ranges from 4-6″ with areas where it mounds to 18″. The team covered about half of the roof with a pre-grown Sedum mat from Sempergreen, with 11-14 varieties of Sedum. The other half was planted with 7,225 perennial plants including Blue Fescue, Geum Tangerine, Coreopsis, Achillea (Yarrow), Black-eyed Susan, Talinum calycinum, Prairie Dropseed, Nepeta, Allium cernuum, Sempervivum Black (Hens & Chicks), Thyme (four varieties) and Sedum (18 varieties).

“Chadwick Arboretum raised more than $400,000 for the green roof project,” Maloney said “…We really want this to be a demonstration of green technology — a repeatable example so more people realize they can do this. It doesn’t have to cost $2 million to build a green roof. It can be attainable,” (The College of Food, Agricultural, and Environmental Sciences News at The Ohio State University, 2013).