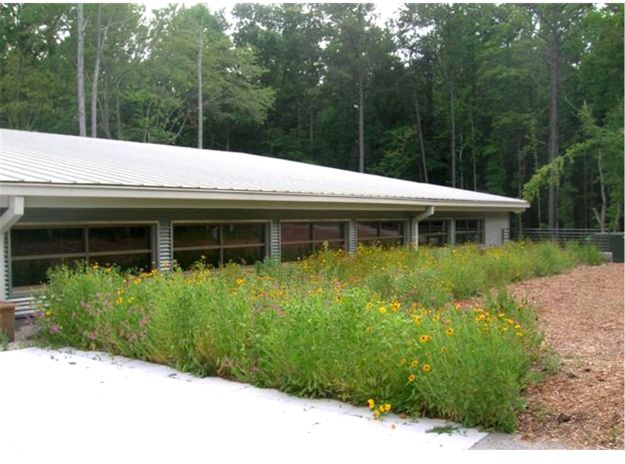 Sweetwater Creek State Park is a 2,500-acre conservation area located in Lithia Springs, Georgia, just outside Atlanta. Completed in the spring of 2006, the 8,700-square-foot Visitors Center and Museum achieved LEED Platinum certification. In the LEED-NC (New Construction) category, the Sweetwater Creek Visitor Center is only the 20th building in the world, and the first in the southeastern United States, to be awarded the Council’s highest distinction.

The Sweetwater Creek State Park Visitors Center and Museum serves as a starting point for park explorations. Exhibits cover the Civil War and the New Manchester Manufacturing Company, as well as the park’s geography and mounted animals. The Center and Museum is “carefully integrated into the hillside of the project site to allow access to the green roof and roof top garden. The site includes numerous visitor education elements including a demonstration garden, descriptions of underground rainwater cisterns, electric car charging stations and accessible green roof,” (jB+a Park Design Studio).

The owner of the Sweetwater Creek State Park Visitors Center and Museum, the Georgia Department of Natural Resources, “wanted the building to help achieve their mission of protecting and preserving natural resources. Indeed, the visitor center, which opened to the public in 2006, serves as a full-scale demonstration model for designing, constructing, and operating a green building. Thirty-eight percent of the building’s total roof area, or 4000 square feet (370 square meters), is used for rainwater collection,” (ArchitectureWeek, 2007). Read about the Center’s innovative rainwater harvesting and waste treatment systems at the link at right.

Voted a Top Pick at the 2004 AIA Green Design Showcase, the south facing siting of the building – along with glass and glazing placement with sunshades – reduces heating and lighting costs. Also, the Center incorporates a composting toilet system, greywater irrigation, and a rainwater harvesting system. In fact, a 77% reduction of potable water use was achieved by use of a composting toilet system and rainwater harvesting, and the system allows the Visitor Center to forgo a septic system and save about 82,000 gallons of potable water each year.

The outdoor plaza overlooks the beautiful living roof, planted with a combination of native and non-native flowering perennials, grasses and groundcovers. The extensive Garden Roof assembly by American Hydrotech, which protects and conserves resources by eliminating wastewater, reusing rainwater on-site and reducing stormwater runoff. Also, the Visitors Center uses a photovoltaic system that supplies 20% of its power.