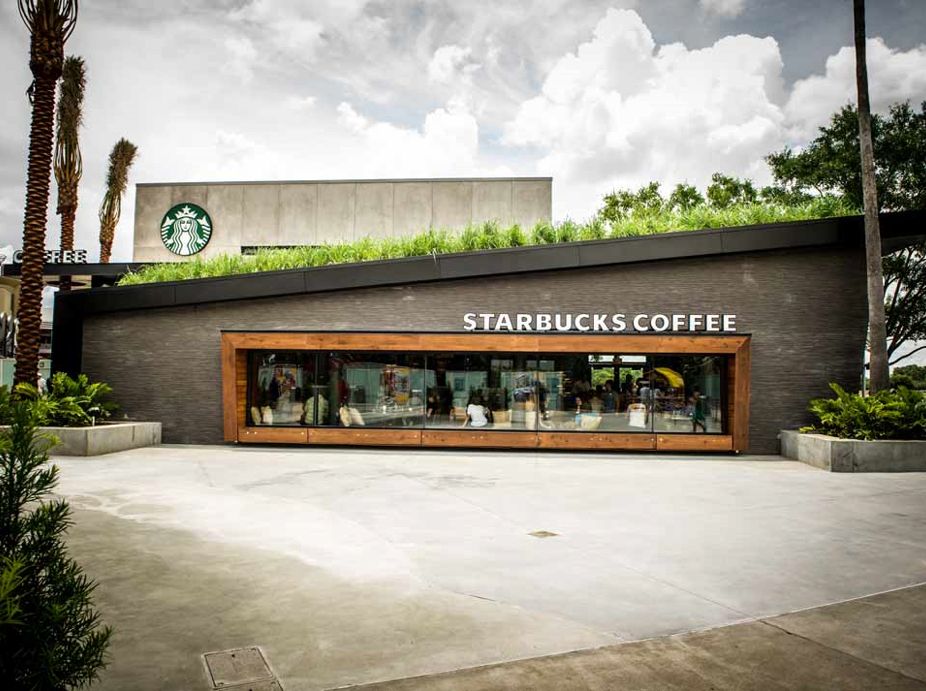 Since 1971, Starbucks Coffee Company has been committed to ethically sourcing and roasting high-quality Arabica coffee. Today, with stores around the globe, the company is the premier roaster and retailer of specialty coffee in the world. Opened in March, 1975, Downtown Disney – originally the Lake Buena Vista Shopping Village – is an outdoor shopping, dining, and entertainment complex at the Walt Disney World Resort in Lake Buena Vista, Florida. Starbucks opened a new LEED-certified store here in the Downtown Disney District in May, 2014. Over the next year, Starbucks and Disney will bring four more Starbucks locations to guests.

Senior Designer for Starbucks, David Daniels’ vision of a green roof atop the new Starbucks store has grown from an idea and conceptual poster on the construction walls in Downtown Disney West Side, Orlando to a thriving, tropical lemongrass sustainable ecosystem.

According to the Starbucks Newsroom, the new 4,000 square foot Starbucks store is a “new page in the collaboration between two iconic brands. In March of this year, Starbucks and Disney teamed up to open the first company-operated Starbucks location at Downtown Disney in Anaheim, California.” See its Living Wall profile in the Greenroof & Greenwall Projects Database.

Installation of green roof plantings and hurricane wind-uplift resilient system was completed through coordinated efforts between the Starbucks design and construction team, Disney Imagineering, the general contractor Elfrink Construction, roofing and green roof contractor Sterling Roofing, and MetroVerde’s tropical green roof design group. “We are excited we can provide such an incredible roof for Starbucks”, says Jimmy Sterling, President of Sterling Roofing, “this green roof provides so many ecological benefits.”

Soil media for the green roof was developed through the University of Central Florida’s Stormwater Management Academy, by Dr. Marty Wanielista and Mike Hardin. The lightweight green roof soil media is designed to promote the cleaning of stormwater as well as supporting optimal plant growth on the harsh conditions of Florida rooftops where temperatures and humidity reach levels difficult for most plants to grow in. Sterling Roofing coordinated installation of the green roof soil media via supersacks and lift truck. Starbuck’s green roof lemongrass is irrigated with a micro-drip system during summer droughts.

Located just past one of the main pedestrian entrances to Disney Main Street, Orlando, the green roof highlights the facade of Starbucks’ 500th LEED store, not only bringing the many benefits green roofs offer to the surrounding environment but also providing an opportunity for visitors to view close up, imagination- and sustainability-inspired design.