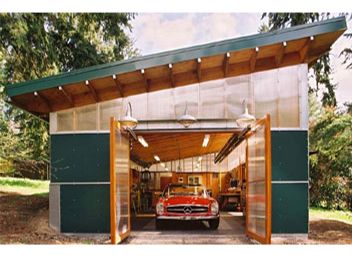 Read the in-depth case study at the Robert Harrison Architects website here. The green-roofed garage/workshop is featured in the July 2007 issue of Sunset Magazine entitled “Eco-savvy garage” by Jennifer Matlack, and you can see the Press Release about the Earth Hero Award given to the Sproull-Radke Garage/Workshop by King County for green building and/or Low Impact Development components here.

Robert Harrison Architects’ goal was to make a simple, modern workshop outbuilding to be used for hobby cabinetmaking and appropriately reverent storage and display of our client’s vintage Mercedes 230SL convertible. The idea of a planted roof came up early in the design process. By setting the floor level low and digging the building partly into the site, and sloping the roof up and away from the neighbors yard and planting it, we minimized the visual impact of the new structure, as well as accruing all the environmental and aesthetic benefits that come with a blooming roof.The Sproull-Radke Garage/Workshop was given an Earth Hero Award by King County. The planted roof is part of the Northwest EcoBuilding Guild-organized and King County-sponsored Green Roof Project, intended to document and publicize the ecological benefits of residential green roofs. American Hydrotech donated their green roof system, Snyder Roofing, a certified American Hydrotech green roof installer, installed the roof membrane and drainage layer, and Guild volunteers helped with the installation of plant materials. The American Hydrotech green roof system is typically used on large commercial roofs of over 10,000 square feet. At around $15 per square foot installed, it is more expensive than many homeowners can afford. It does come with a warranty like any other roofing material, which is a major advantage. We followed the manufacturer’s recommendations and details to the letter, in order to have a ?control? green roof system against which to judge the performance of the less expensive experimental systems of the Green Roof Project. (For example, the American Hydrotech details called for a border of gravel around all edges of the roof that on a larger roof would be less noticeable.)

The planted roof did not fare well in the drought of 2003. A housesitter misunderstood the watering regime, and most plants on the roof withered. It was replanted in spring of 2004, but plantings on the roof are still not as well established as one would hope. We are not yet able give definitive reasons for this. The monitoring which was to provide empirical data on the roofs of the Northwest EcoBuilding Guild’s Green Roof Project has yet to be implemented. As with all of our projects, this one incorporates a number of green features spread evenly across the categories of settlement ecology, energy conservation, resource conservation and healthy building.