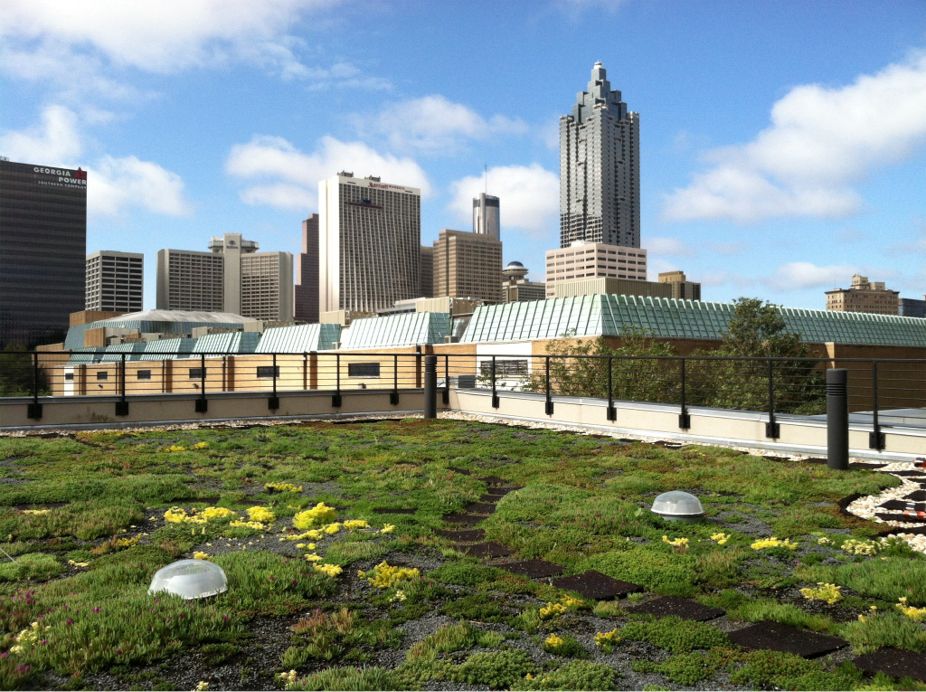 Southface Energy Institute is located at 241 Pine Street NE, Atlanta, Georgia 30308; Phone: 404.872.3549; visit their website and Eco Office page. The Turner Foundation Green Roof is open for the Public Tour at 10:00 am on Wednesdays and the Professional Tour is held by appointment – professional tours can be scheduled Monday-Friday, 9am – 4pm – please read about all the options for tours, including the wonderful Online Tour. Watch the 2:14 video Southface Eco Office – Project of the Week 9/15/14 from Greenroofs.com on the greenroofsTV channel on YouTube.

For over 30 years, Southface is the U.S. Southeast’s non-profit leader in the promotion of sustainable homes, workplaces and communities.

Located in downtown Atlanta, Georgia, the Southface campus has grown in recent years to include three buildings, two of which are set amid grounds that have been planted with native and drought-tolerant species, and include mature trees plus a food-producing urban garden. The Resource Center is 6,400-square-foot residential-style green building, completed in 1996 to coincide with the Atlanta Olympics. As a showcase for over 100 innovative products and technologies, it addresses four aspects of environmentally responsible construction: energy efficiency, indoor air quality (IAQ), resource efficiency and accessible design.

The 10,100- square-foot Eco Office with the rooftop green roof was officially opened in 2009. The third building, the Southface SWEET Center, is an older, street-facing building, opened by Southface in October 2010 for use as a regional green building training facility.

Built by a consortium of construction firms using widely available, off-the-shelf products, materials and technologies, the Southface Eco Office is a three-story structure with a rooftop green roof. It was officially opened in 2009 after receiving its ENERGY STAR label, as well Platinum LEED certification from the U.S. Green Building Council and EarthCraft Light Commercial certification – a regional green building designation specific to the Southeast. It also meets The 2030 Challenge launched by the non-profit group Architecture 2030. The Eco Office is noted for its average energy cost of less than $25 per day. (Southface, 2009).

The Southface Eco Office is an 8,300 square foot, environmentally responsible building project to showcase some of the innovative green building technologies available in today’s market. The new office building serves as both a main office to house about 20 of their full-time employees, as well as an educational and demonstration facility for the public.

“The design of the Southface Eco Office began with an inter-disciplinary design charrette involving the full design team and the client. One of the targets established during the charrette was a 60 percent reduction in energy use below that of conventional design and construction practices, with a goal of achieving all 10 LEED Energy Optimization credits.

The Turner Foundation Green Roof on top of the third floor expands the office space into a rooftop patio with a spectacular view of downtown Atlanta. The vegetated roof is home to a 6.4-kW photovoltaic array and a 1,750-gallon rainwater collection cistern. The photovoltaic array is salvaged from a BP gas station and also serves as a shade canopy for the deck. The rainwater cistern supplies water for several of the building’s water uses and is backed up by water collected in the site cistern. Learn more about the rainwater harvesting from The Rain Saver.

“Sedum plants reduce the heat island effect, as well as manage stormwater run-off by filtering and diverting water to the site cistern;

Walkway squares, made of recycled rubber, were salvaged from a nearby building project;

Louisiana Pacific Weatherbest decking is a composite product made from HDPE plastic and post-industrial recycled wood;

An Eco Mesh evaporative cooling system creates a micro-climate around the outdoor units of the heat pumps, increasing HVAC cooling efficiency by 15% to 20%;

A 1,750-gallon cistern collects rainwater for toilet flushing, rooftop irrigation, and the evaporative mesh cooling system. It is wrapped in a wooden vat salvaged from an abandoned winery in South Atlanta,” (Southface, 2008).

The growing media is about 4″ deep, and was planted with a variety of Sedums, Delospermas – including Sedum calycinum, Sedum pachyphyllum, Delosperma cooperii, and Delosperma kelaidis ‘Mesa Verde’ – along with Talinums, and Hens and Chicks in March, 2008 by staff of Southface and volunteers.