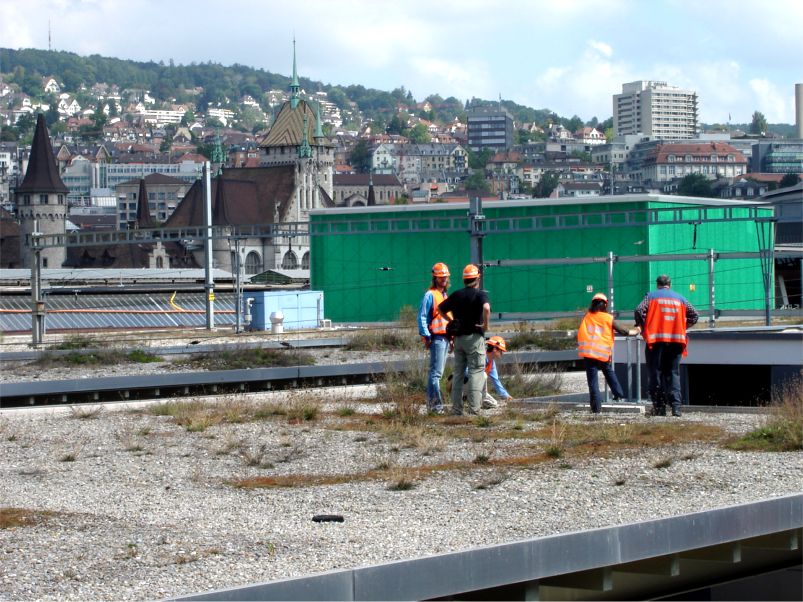 The Sihlpost Platform Greenroof at the Zurich Main Railway Station was one of the excursion stops offered from the 2005 World Greenroof Congress in Basel, Switzerland. See the case study from Livingroofs.org.

As part of the “Bahn 2000” project, the integral time schedule for public transport in Switzerland, the main station had to be enlarged to include four additional platforms. Building space is scarce in the centre of Zurich and connections to existing railway lines and the constant train traffic made the construction of the new railway station annexe difficult. Goods trains carrying mail and parcels were using the only space available. During the preparation of the project, a problem surfaced for which structural and railway engineers were unprepared. The whole area was mapped as a sensitive area, a living space for different endangered insects and reptiles whose natural environment consisted of desert-like spaces. In the absence of their natural environment, these animals used the space between the tracks as their man-made living space. Swiss law prohibits the destruction of such biotopes without replacement. In the search for a solution the idea of using the rooftop as a replacement was suggested and accepted by the administration.The roof was planned with a special focus on the living space demands of the different species. Therefore connections using block walls and planted fences had to be introduced to give rooftop access to the less mobile insects. On the ground, a system of interconnected biotopes of the same sandy and rocky surfaces as those on the roof had to be installed to attract and house the necessary fauna and flora to make the system work.

The project idea was worked out in great detail: all possible material was evaluated and the contractor was given the final decision on the possible material to work with at a fixed price per square metre. The final choice was the most costly and highest quality roofing membrane possible. The ease and speed of installation allowed the contractor to finish the whole project within a month from start to finish, without any restrictions due to wet weather or accessibility.One of the most difficult parts was bringing in the soil-substrate. There was no choice but to lift soil from the tracks up to the roof by crane or to blow the soil in with an airboost-concrete pump, after an experiment to lift the soil in by a railroad crane had failed. Half the roof surface was filled in using a crane, and half of it was blown in by a concrete pump over a distance of up to 200m. The difficulty of blowing coarse gravel was overcome by mixing the gravel with woodchips. After completion of the construction, the roof was landscaped using varying substrate depth. Small hills were provided as a retreat during cold and dry periods.One year after construction, during which time there have been unusually cold spells and hot dry periods, the rooftop vegetation is developing well and the more mobile insects have already taken possession of their new habitat. Passengers using the new railroad station can find out about the project from the information sheets or signs attached to the fences. The less interested will have enjoyed the cool shade provided by the green roofs during the exceptionally hot summer of 2003.