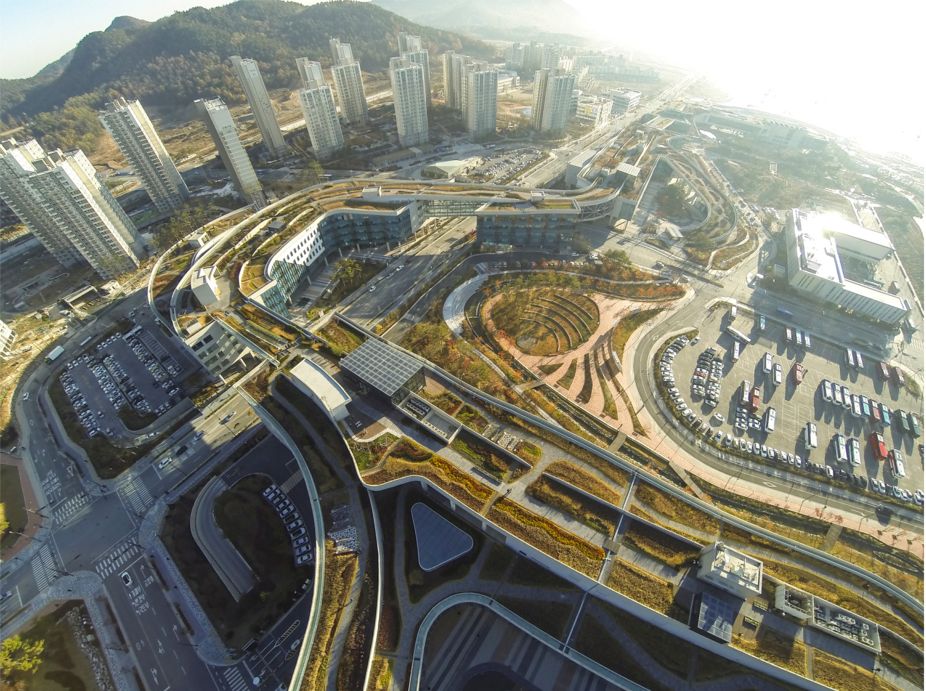 Sejong, Public Administration Town is located at 94 Dasom 2-ro, Sejong Special Autonomous City (Eojin-dong), 339-012; visit the government website and see the Visitor’s Guide. Reservations can be made to visit the roofs at www.chungsa.go.kr – Korean only – and the roofs are closed in winter. Watch the 2:10 video Sejong, Public Administration Town – Project of the Week 12/5/16 from Greenroofs.com on the greenroofsTV channel on YouTube. Greenroofs.com Project of the Week video photo credits all courtesy of Balmori Associates and photography by Efrain Mendez, ArchFrame.net.

For more information regarding the Sejong, Public Administration Town, please visit Balmori Associates at http://www.balmori.com/ or contact them at 212.431.9191 and info@balmori.com.

The Administrative Complex Sejong is Korea’s newest city and home to 37 government organizations and 13,000 public servants who were previously located in or near Seoul. With a framework of eight levels above ground and one below, the structure totals 3.5 kilometers long – perhaps the longest in the world. In 2007 Balmori Associates won the competition to design the Master Plan for Sejong City, South Korea’s new administrative city and the project broke ground in December, 2008. The first phase was completed in 2012, the second phase in 2013, and the third phase was officially completed in December 2014, although Sejong City is still a work in progress and not all areas have been yet planted.

Dictated by the contours of the land that were once hilly but now flattened to make way for as many as 500,000 future residents, a grid of streets and transit runs through the center of the city within a network of green spaces. The connected structures were designed to look like an Oriental dragon in flight from above and contain a variety of planted sloping walkways, wide-open expanses, and ramps and corridors, with the government offices below.

Balmori Associates says, “We proposed a new approach to city-making, one that starts with landscape architecture. The master plan consists of a continuous linear park on a continuous roof joining all the ministries. The government buildings are not separate, closed structures; they form a continuum at the ground and roof levels. This gesture means bringing access to all and encourages communication among the ministries. The park on the roof is intended as a fifth facade. Each of the six towns surrounding the Administrative City looks down on the park and the government buildings below it.”

Infrastructure at street level is complemented by a parallel system of footpaths and gathering areas on the greenroofs of the massive government complex. The area of the Master Plan encompasses a total of 667 acres or 2,700,000 M2; the area of the greenroofs equals 28 acres or 115,000 M2. The roof slopes vary considerably, allowing the greenroof to slope down to the ground in a pedestrian-friendly incline.

The creation of a new city is an opportunity to bring cultural ideas and beliefs together to celebrate the spirit of Korea in the 21st century. To achieve this end, Balmori proposed three interconnected urban strategies:

FLAT CITY: The iconic plane–the physical and conceptual datum of aligned building rooftops–symbolizes the interconnected unity and democratic nature of the people and the government.

LINK CITY: Physical and visual linkages are created between the government and the people, the urban and the natural, the ground and the sky.

ZERO WASTE CITY: We created a strategy for the model city development that is based on zero waste principles. All waste from one system becomes the food for another.

“In accordance with the final design, the town’s government office complex is eco-friendly, energy-saving, intelligent, and futuristic, with an infrastructure based on information and communications. As a green and “living” building, it is designed to blend in with the natural surroundings. It also has enhanced protection against earthquakes,” (government website). Specifically, the complex has a First-rate Seismic Performance Rating, which means it is able to withstand earthquakes with a magnitude of 7-8 on the Richter scale.

Some of the Special Features of the complex include:

1st Grade Building Energy Efficiency Rating (in process);
“Excellent” rating under Green Building Certification (in process);
Reduction of KRW 63 billion worth of energy annually through geothermal and solar power generation facilities;
Reduction of KRW 30 million in water supply and drainage costs annually through a rainwater recycling system;
Waste water treatment and rainwater recycling systems are incorporated into the landscaping, and reduced tap water consumption is achieved through the use of treated water;
Reduced Building Energy Consumption through Green Roof Insulation (16% for air conditioning, 10% for heating).

See all of the Special Features.